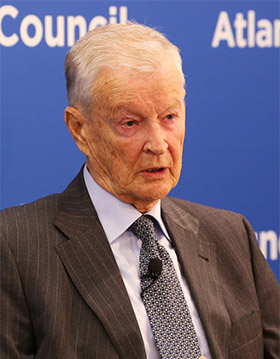 President Barack Obama has moved wisely with his administration’s progressive travel and financial sanctions against Russia’s ruling elite over Russia’a assault on Ukraine, but has failed to seriously begin building a domestic understanding that support for Ukrainians is vital to US interests, former National Security Advisor Zbigniew Brzezinski said. The Ukraine crisis is “the most important challenge to the international systems since the end of the Cold War,” Brzezinski told an audience at the Atlantic Council, yet “right now a significantly larger number of Americans are interested in the basketball championship.”

For the United States to respond to Russia’s aggression “in a responsible, serious, fashion,” it is politically essential for “president at some point now … to start telling the American people what is at stake here.” Brzezinski called for Obama to make a major policy address on Ukraine — from the Oval Office or elsewhere — to do just that. Brzezinski spoke during a two-day conference on the future of Europe sponsored by the Atlantic Council.

To deter Russia from a full-scale invasion to directly occupy parts of mainland Ukraine, the United States must make a credible case that the West will back Ukraine in a long, urban guerrilla war to fight for its independence, Brzezinski said. If Russian President Vladimir Putin decides to invade, the Ukrainians’ choice will be either to surrender or to fight guerrilla-style in their cities – a conflict that could spread to other ex-Soviet parts of the former Soviet Union, notably Moldova, Brzezinski said. A war in Ukraine, with support from the West, likely would resemble in many ways the Spanish Civil War of the 1930s, he said.

On Obama’s need to generate a domestic consensus of supporting Ukraine against Russia
“He has generate some degree of conviction in the West that this is a joint responsibility, he has to convince the Russians that we are serious … he has to convince the American public that this is important.  And here I would be more explicitly critical.  Otherwise I defend him. I think he’s moved intelligently, and he has tried to convince the Russians that this could be a very counter-productive game.
“Where I do fault him is for not explicitly, calmly but in a broad perspective, addressing the American people on this issue. Notice, he hasn’t made a single major statement to the American people on what potentially could be a very major international crisis.  And yet he needs the support of the American people.  … The president hasn’t laid out to the American people a comprehensive statement of what is really at stake. Why do we have this problem, why it is in our common interest to work it out, including with the Russians if possible – and I’ll comment on that separately – and if it doesn’t work out, why we have an obligation to help Ukraine.”

On America’s need to consider providing weapons for a long, urban guerrilla war by Ukrainians
“If we are to deter the Russians from moving in, we have to convince the Russians that it will be costly and prolonged. It will only be costly and prolonged if the Ukrainians fight.  The Ukrainians will only fight if they think they will eventually get some help from the West, particularly in the kind of weaponry that will be necessary to wage a successful defense. They’re not going to beat the Russians out in the open field, where thousands of tanks move in.  They’ll only beat them one way: prolonged urban resistance. … Then the war becomes costly. Then its economic costs escalate dramatically for the Russians, and then the war becomes futile politically. But to be able to defend a city, you have to have handheld anti-tank weaponry, you have to have handheld rockets, you have to have some organization.”