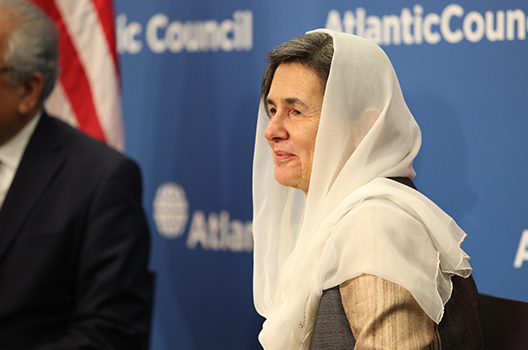 On March 31, the Atlantic Council’s South Asia Center hosted First Lady of the Islamic Republic of Afghanistan Rula Ghani for a public and on the record conversation about the progress made under the Ghani Presidency, and the challenges that remain for Afghanistan.

The Atlantic Council’s President and CEO Frederick Kempe made welcome remarks, underscoring the critical moment in Afghanistan’s future trajectory. Ambassador James B. Cunningham followed with an introduction of Mrs. Ghani, noting her unique and historic contribution as a leader not only in Afghanistan but on the world stage. Mrs. Ghani’s remarks spoke to the successes of the Ghani administration, and drew attention to the misrepresentation of the progress of Afghanistan’s political and societal institutions in the media. She highlighted her own work as First Lady, her entry into public life, and the role she plays as interlocutor between the people and the government, as well as to her work with women. This was followed by a moderated discussion and question and answer session with Amb. Zalmay Khalilzad. The discussion focused on the role that development projects, education, infrastructure, and technology play in the progress being made in Afghanistan.