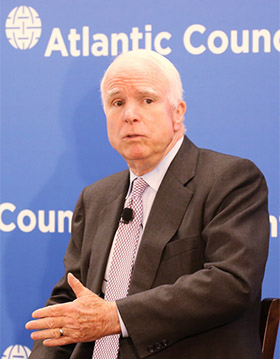 The Role of the United States: A European Power

Senators John McCain (R-AZ) and Chris Murphy (D-CT) spoke as part of the Atlantic Council’s Toward a Europe Whole and Free conference on the US role in European security. Both senators believe that events in Ukraine are vital to the transatlantic relationship, with Senator Murphy calling it “a test” an opportunity for the United States to show that the bond with Europe is not borne of “temporary, strategy interest.”


The conversation turned to many areas, but the majority of the conversation touched upon Ukraine. When CNN’s National Security Correspondent Jim Sciutto asked Senator McCain about the costs the United States and Europe should impose on Russia to make Putin change his calculus, he mentioned that “just the threat of energy independence” of Europe from Russia “can change the balance.” In Senator McCain’s view, “the European are not going to enact meaningful sanctions as long they are reliant on Russian energy.” Turning to military assistance, Senator McCain reminded the audience that the US has about fifty long-term military assistance programs with other countries and that having one with Ukraine would be prudent. In addition, the United States should send weaponry for Ukrainian forces not “because they can defeat the Russians,” but because “it’s a morale thing.” As of today, the Ukrainian “morale is not good,” according to Senator McCain.

Senator Murphy, however, believes there is more at stake in the Ukraine crisis. Sending weapons to Ukraine’s military would not be “provocative,” as some critics of this idea claim. The problem lies in knowing that “the type and kind of weaponry” the United States send to Ukraine would not tip the scale of the conflict. Thus, if the United States cannot deliver the requisite weaponry to aid Ukraine, then a Russian victory would count as a win over Ukraine and the United States, claimed the senator from Connecticut. To send a clear message to Putin, Senator Murphy continued, “let us give a Membership Action Plan [MAP] to Georgia” to join NATO and enact an “open door policy” so other countries can work their way into the Alliance. Further, “we should not forget about Crimea” and should not remove sanctions until the disposition has changed on that peninsula.