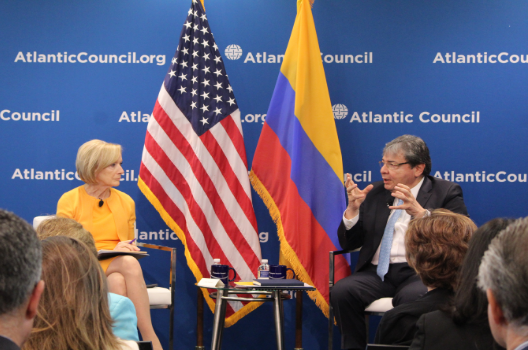 The Atlantic Council’s Adrienne Arsht Latin America Center, in partnership with the United States Institute for Peace, the Woodrow Wilson International Center for Scholars’ Latin America Program, and the Inter-American Dialogue, hosted H.E. Carlos Holmes Trujillo, Minister of Foreign Affairs of Colombia, for a discussion on the future of US-Colombia relations. The conversation was moderated by Judy Woodruff, anchor and managing editor of PBS NewsHour. The discussion focused on major issues that impact US-Colombia relations, from the Venezuelan crisis to coca eradication in Colombia. The event highlighted the need for a strong US-Colombia ties to ensure further progress for the entire Western Hemisphere.

In his opening remarks, Jason Marczak, director of the Adrienne Arsht Latin America Center, stressed the importance of the bilateral relation, emphasizing the Atlantic Council’s commitment to this partnership. The Atlantic Council’s US-Colombia Task Force is a group of experts led by Senators Roy Blunt and Ben Cardin focused on advancing and modernizing this strategic relationship. Marczak also stressed that a democratic transition in Venezuela is a priority for the Atlantic Council and for the region.

Kicking off the discussion, Woodruff was curious to know what issues keep the foreign minister awake at night, to which Minister Holmes Trujillo replied, “all of them together.” But, if he had to pic one, Minister Holmes Trujillo mentioned the one and a half million Venezuelan refugees now living in Colombia. He identified the potential for this number to rise if economic and humanitarian conditions in Venezuela continue to worsen. He further referenced President Duque’s desire to reframe issues involving Venezuelan migrants as a regional problem and not solely a Colombian concern to effectively mobilize international assistance. He expressed immense gratitude to the international community, particularly the United States, for its support, but called for additional assistance to strengthen Colombia’s capacity to assist refugees.

Venezuela, as Woodruff notes, is no longer a topic present in the daily news cycle of many Americans. For Minister Holmes Trujillo, achievements that were unthinkable earlier this year, such as the recognition of an interim president in Venezuela by more than sixty countries and the formation of a unified opposition, highlight his hope that “conditions will [soon] exist so that democracy can again be back in Venezuela.” While he stressed that the US must keep playing a fundamental role in this process through sanctions and continued discussions, he emphasized that a solution to the Venezuelan crisis must come from within the region.

Coca eradication was another topic discussed with the foreign minister. He stated that, out of the one hundred and sixty thousand hectares of illicit crops inherited by President Duque, approximately forty thousand hectares were eradicated this year alone. He reaffirmed Colombia’s commitment to uphold health standards set by the country’s Constitutional Court regarding the aerial spraying of glyphosate, as a tool to address the coca issue. Considering illegal drugs holistically, Minister Holmes Trujillo defends the multilateral approach to addressing the issue, bringing up the concept of shared responsibility. From this viewpoint, the foreign minister believes that all parties involved in the illegal drug trade, from cultivation to consumption, need to unite to fight back against this industry.

To conclude, the discussion centered on the implementation of the peace agreement between the Colombian government and the Revolutionary Armed Forces of Colombia (FARC). As Woodruff noted, the agreement has not been fully implemented since its conclusion in 2016. Minister Holmes Trujillo shared that President Duque’s wants the agreement to be altered to encompass long term challenges. He lists five potential changes to the agreement: narcotrafficking and kidnapping cannot be considered a political crime; sex crimes against minors must fall under the jurisdiction of Colombia’s ordinary justice system and not the Special Jurisdiction for Peace (JEP); crimes committed after the signing of the agreement must be considered under Colombia’s ordinary jurisdiction; FARC members with goods or resources that were not properly declared must face severe penalties; and a congressperson from the FARC political party found guilty of grave crimes by the JEP must resign, and the FARC political party will have the capacity to fill the vacant position. These alterations would be considered and possibly implemented through political consensus and institutional means.

After underscoring Colombia’s desire to further judicial cooperation with the United States via extradition treaties, Minister Holmes Trujillo concluded the discussion by reinforcing the administration’s commitment to successfully implementing the peace agreement with the proposed changes that helped Duque win the presidency in 2018.