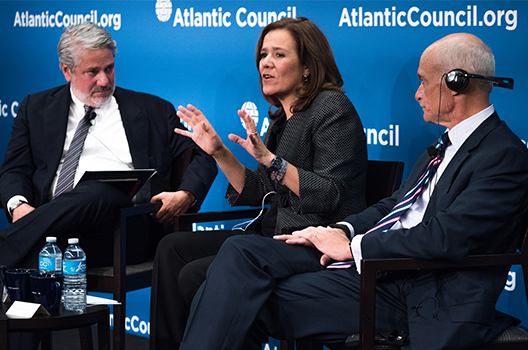 The new administration has brought with it a plethora of tensions for the United States’ relationship with Mexico. From a proposed border wall, to talks of withdrawing from NAFTA, to a scrapped meeting between the two presidents, what was historically a diplomatic partnership has been turned on its head.

On Tuesday, March 7, the Adrienne Arsht Latin America Center hosted ‘Trade, Security, and Prosperity,’ a discussion with Margarita Zavala, one of the main contenders for the presidency of Mexico in 2018, and Michael Chertoff, former US Secretary of Homeland Security. The event also marked the launch of the Beyond the Headlines: A Strategy for US Engagement with Latin America in the Trump Era. The publication, part of the Atlantic Council Strategy Papers series for the new administration, was written in partnership with the Brent Scowcroft Center on International Security.

Jason Marczak, Director of the Latin America Economic Growth Initiative at the Latin America Center, kicked off the event by emphasizing the importance of US-Mexico relations for economic growth and security. In the broader context of the United States’ longstanding partnership with Latin America, Marczak summarized the paper’s four key pillars for US engagement with the region: unleashing the US private sector, collaborating in the fight against organized crime, seizing the value of regional integration, and embracing Latin America’s global emergence.

Ambassador Thomas R. Pickering, former US Under Secretary of State and a former ambassador with over 40 years of diplomacy experience, gave opening remarks. Pickering not only acknowledged the historic lack of engagement between the US and Latin America, but also cited the potential opportunities for a stronger relationship in the present day. “We have a new opportunity to further open the doors to the hemisphere, and the hemisphere to us.”

Peter Schechter, Senior Vice President for Strategic Initiatives and Director of the Adrienne Arsht Latin America Center, moderated the conversation between Zavala and Chertoff. Zavala harkened back to her start in politics in the 1980s, when the ruling PRI party viewed the US as a “scapegoat” for Mexico’s problems, leading to tense relations. However, she noticed that as engagement between the two countries increased, relations improved. “The US has become part of Mexico, and Mexico has become part of the US,” stated Zavala, while also affirming that this mutualistic relationship is now in jeopardy.

Secretary Chertoff encouraged the audience to amplify the voices of those working directly with Mexico, such as those living in border states, to promote a different perspective and counter the “rise of xenophobia” in the United States. “If you go down to border regions, you’ll find a lot of people who really cherish this relationship. The question is how do you get the message out?” he asked.

Both panelists acknowledged the key role Mexico plays in US security by partnering with US authorities to identify threats before they reach the border, as well as the fact that no one who has committed a terrorist act in the United States entered through Mexico.

Asked about her bid for the presidency and next year’s elections, Zavala stated the economy, corruption, and national security were three of the top issues for Mexican voters in 2018. Zavala also acknowledged the need to address the domestic issues in the Northern Triangle countries – El Salvador, Guatemala, and Honduras – which have been the main source of migration to the US through Mexico.

Finally, the panelists discussed the issue of the proposed border wall between the United States and Mexico. Chertoff suggested enhancing technology that would identify smugglers crossing the border, including American guns going to Mexico, combined with a temporary work visa program. Zavala criticized the rhetoric that conflates all migration with drug trafficking and other illegal activities, stating that it obscures the contributions Mexicans have made to US society.