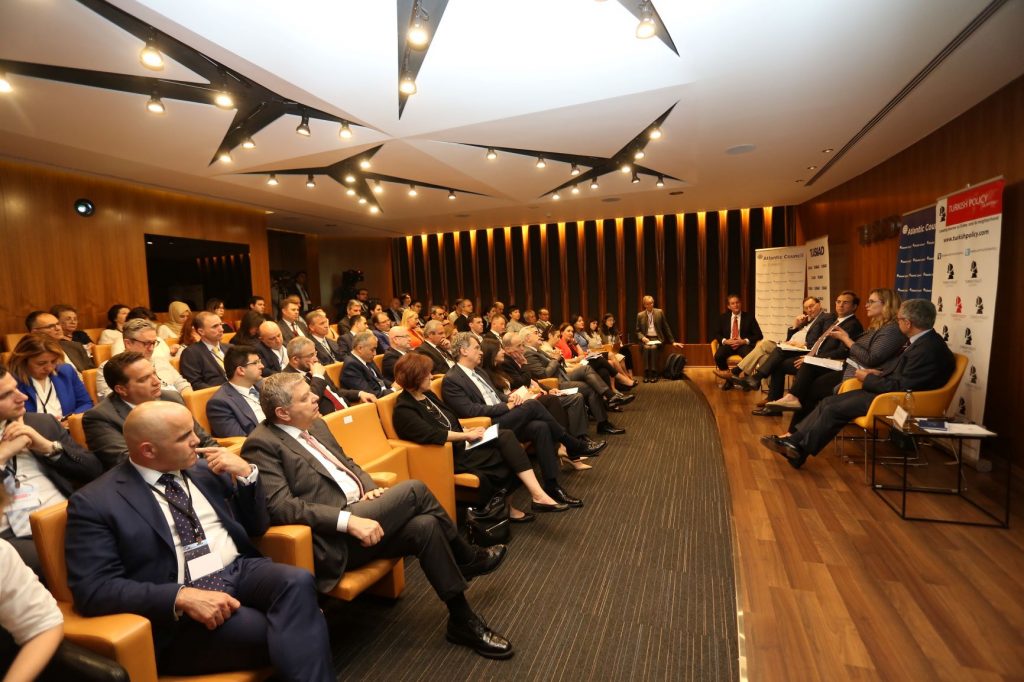 TÜSİAD President Simone Kaslowski kicked off the event by putting into context the importance of Turkey’s energy sector, noting that TÜSİAD has “always seen the energy sector as one of the most strategic sectors for the economy and social development of Turkey”. Kaslowski stressed the remarkable opportunity of renewables in Turkey, which continue to become even more attractive as technologies improve, to boost power generation from domestic resources and improve Turkey’s resilience. At the same time, Kaslowski cited a challenging investment environment which needs to improve to facilitate further investment in the sector.

In her opening remarks, Atlantic Council IN TURKEY Director and Turkey Representative Defne Sadıklar Arslan underlined the importance and the difficulty of attaining energy security for a country like Turkey which has few domestic fossil fuel resources of its own. Arslan highlighted several of the key steps Turkey has taken in recent years to boost diversification including the inauguration of the Trans-Anatolian Pipeline (TANAP) in 2018, greater utilization of its ample renewable resources and the increase of liquid natural gas (LNG) in Turkey’s energy mix. Arslan in particular drew attention to the fact that Turkey is the largest importer of LNG from the United States in Europe and the 8th largest in the world.

Erika Olson spoke about US energy policy in the region and Turkey, which is driven by the principles of energy security and supply diversity. Olson noted a convergence between geopolitical goals and market forces as the rise in US LNG exports offers many countries the possibility to diversify natural gas supplies at increasingly competitive prices. Olson argued that Turkey has done an excellent job at diversifying its energy mix in terms of both different types of resources and places of origin. Olson also spoke about Turkstream, saying that the first line of the pipeline, which is earmarked to supply Istanbul does not raise any issues. However, she added that the second line, which is planned to supply the Balkans and as far as Baumgarten in Austria, is problematic and appears to be another attempt by Russia to increase its geopolitical control over importing countries, particularly in Europe. While not speculating on the potential of sanctions against Turkstream, Olson referred to US Energy Secretary Rick Perry’s remarks in Kiev on May 21 about the US opposition and imminent sanctions against Nord Stream II and drew parallels between the two marquee Russian pipeline projects to Europe.

Ambassador Mithat Rende spoke about Turkey’s energy policy and the steps the country has taken over the course of many years to ensure its energy supply. Ambassador Rende said that dating back twenty years ago, Turkey had two objectives, first to ensure its own energy security through diversification and second to help contribute to European energy security. Concurring with Erika Olson, Rende argued that that the first objective has been achieved and pointed to major achievements such as the Southern Gas Corridor and the expansion of LNG infrastructure. Ambassador Rende also discussed Turkey’s perspective on gas resources in the Eastern Mediterranean. Ambassador Rende argued that the agreements the Greek Cypriot administration concluded with other regional countries are invalid as it does not represent the entire island and as the Exclusive Economic Zones in the Eastern Mediterranean are disputed. Ambassador Rende stressed the need for a comprehensive settlement in Cyprus between the Greek and Turkish sides which together are the co-owners of the resources.

John Roberts talked about the implications of Turkstream and the potential new sources of natural gas supply for the Turkish market. Roberts argued that Turkstream is an attempt at getting more Russian gas into Europe on Russian terms and said that there is a good chance of the second line being realized . The question is to know what effect the pipeline will have on the European gas market and on other potential sources reaching the market, specifically those coming from Iran and Iraq. Roberts said that US sanctions on Iran make it unlikely we will see additional resources reaching Turkey let alone onwards to Europe. On the other hand, Roberts said that Northern Iraq, which has significant natural gas resources, has a great deal of potential but previous agreements between Northern Iraq and Turkey towards a pipeline have not produced results and until now there has not been sufficient investment to secure needed export-level quantities.

Murat Özyeğin discussed the potential of Turkey’s renewable energy sector. Özyeğin outlined that Turkey has all of the necessary ingredients to realize much faster growth. Turkey has excellent resources including above average sunlight hours and one of the best wind corridors in Europe, second to Scotland. Turkey also has an experienced and effective regulator in the Energy Market Regulatory Authority (EMRA) as well as the political will to develop renewables, driven by a strong desire to reduce its current account deficit. Nevertheless, Özyeğin pointed to several challenges in Turkey’s path. Turkey’s current feed-in tariff will expire in 2020 and the market needs clarity on what the tariff will be to attract investment moving forward and argued that while it can be reduced, it must be dollar or euro based to satisfy foreign investment conditions. Özyeğin also argued that Turkey needs to reform its licensing process to ensure that licenses end up in the hands of real developers rather than license traders which can delay the development calendar of important projects. Still, in conclusion, Özyeğin argued when analyzing the dynamics, there is no reason why Turkey should not become the leading growth area for renewables in Europe and suggested that the renewable sector is a great area for FDI in Turkey.

Energy in Turkey is and will remain an important and dynamic sector with regional implications. The Atlantic Council’s special issue on Turkey’s energy sector in cooperation with TPQ explores and analyzes the future and trends of the sector in addition to its relations with other regional actors.