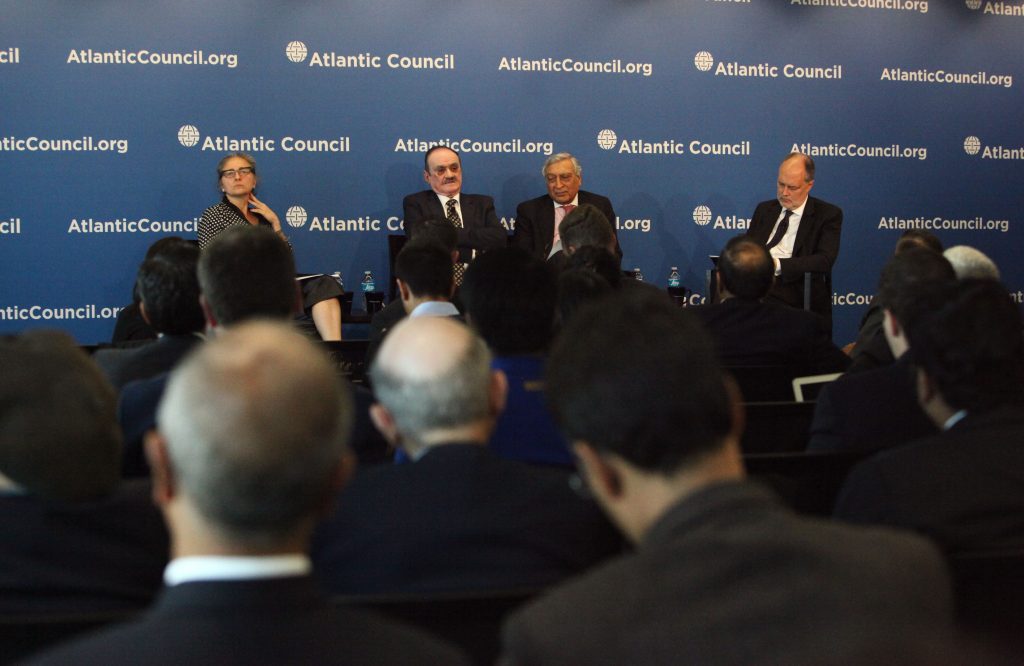 On November 4, the Atlantic Council’s South Asia Center hosted a discussion on US-India bilateral relations, in collaboration with the Vivekananda International Foundation (VIF).  Dr. Bharath Gopalaswamy, Director of the South Asia Center, opened the dialogue, which aimed at addressing the ways in which the US-India relationship can be sustained, and ultimately advanced to new levels. Following Dr. Gopalaswamy’s remarks, General N.C. Vij, Director of VIF, expounded on the notion that India is the lynchpin of the US rebalance to Asia, and that “together, we can traverse along a path of peace and harmony.”

The event featured a panel on “Regional Security Challenges in Asia,” and a panel on “Prospects for US-India Defense and Economic Relations.” The sessions were bracketed by a special address from US Assistant Secretary of Commerce for Global Markets and Director General for the US and Foreign Commercial Service, H.E. Arun M. Kumar. In his keynote address, H.E. Arun M. Kumar framed the larger discussion by addressing the economic and familial links between the US and India. The US and India are pursuing a long-term strategic relationship because there exists such a strong network and connection between the two nations.

The first session, moderated by Dr. C.  Christine Fair, Associate Professor at the Center for Peace and Security Studies at Georgetown University, featured The Hon. James B. Cunningham, Senior Fellow and Khalilzad Chair for the Atlantic Council’s South Asia Center; Lt. General R K Sawhney, Dean for the Centre for Defence Studies at VIF; and Amb. Kinwal Sibal, Dean for the Centre for International Relations and Diplomacy at VIF.  While the panelists agreed that there are various areas on which the US and India should cooperate, the Indian and American counterparts presented different visions of how the international community should engage with India’s volatile neighbor, Afghanistan.  In particular, Amb. Sibal expressed skepticism regarding US policy towards Pakistan, and whether President Obama’s recent troop commitment could do anything to stop the spread of instability in and around Afghanistan. The Hon. James B. Cunningham responded to these remarks by explaining the various effective ways in which US troops would be deployed.  Ambassador Cunningham noted that continued US presence in Afghanistan constitutes a conceptual shift, perhaps more important than exact troop level.  Although presenting different tactical visions of the security situations within this region, all panelists concurred with General Sawhney that if Afghanistan implodes, “it won’t only be a problem for the region, but it will be a problem for the globe.”

General N.C. Vij moderated a second panel on defense and economic relations which featured  Sumona Guha, from the Policy Planning Staff of the US Department of State; Dr. Harinder Sekhon, Senior Fellow at VIF; and David Ryan, Executive Vice President and Americas Regional Head of Tata Communications. The panelists concluded that economic development within India is solid and on an upward trajectory.  The stated goal of increasing trade to $500 billion in the next decade reveals that there is significant untapped potential in India from which both countries can benefit. As conveyed by Dr. Sekhon, Prime Minister Modi and President Obama have met five times over the past year, an encouraging sign for US investors and businesses for both countries.

While US-India relations are on a stable trajectory upwards, there remain irritants that hinder the relationship from reaching the next levels.  A few of these include the US relationship with Pakistan, China’s economic and defense ties to the US and Pakistan, divergent Intellectual Property Rights standards, and Foreign Direct Investment caps.  The US and India must continue to engage in an open dialogue to address these issues.  If they continue to do so, there is hope that it will become the most significant partnership of the 21st century.