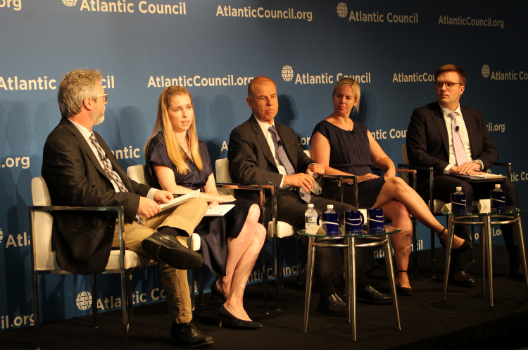 On June 12, the Atlantic Council’s Adrienne Arsht Latin America Center in partnership with POLITICO, hosted a timely event to discuss the economic costs of tariffs on Mexican imports for US consumers. The event was held less than a week after a US-Mexico deal was reached.

In his opening remarks, Jason Marczak mentioned that tariffs on Mexican imports would have had a terrible effect on the US economy, since North American economies’ fates are intertwined after twenty-five years of free trade. Marczak added that for every $1 imported from Mexico, $0.40 are US content, which means that “no product is really just Mexican or just American.” Besides the economic costs, Marczak urged the audience to think of the effects on US competitiveness compared to other regions. Marczak ended his remarks by warning that the tariffs threat is still present.

Senator Johnson began by saying that while he understands President Trump’s frustration on immigration, he “does not necessarily agree with the Administration’s worldview [on] tariffs.” He declared that tariffs are a tax paid by consumers of the country imposing them, and that tariffs would hurt US manufacturers that benefit from international supply chains.

Senator Johnson then stated that he understands the current federal administration’s use of tariffs as leverage, but that the United States must ratify the United States-Mexico-Canada (USMCA) agreement. He mentioned that the North American Free Trade Agreement (NAFTA) was beneficial for the United States, but that it needed to be updated.

Marczak followed up by saying that the new Mexican government has shown willingness to cooperate with the US in several issues. Senator Johnson stated that his contact with Mexico’s new administration has been “very positive,” since it has recognized the immigration problem. He mentioned that a strong Mexican economy will make the US economy stronger and reduce unauthorized migration.

Johnson declared that Congress has given up its authority on trade to the executive branch and that he believes something that must change.

Senator Tom Carper joined the conversation talking about how Mexico has been responsive on trying to stem the flow of migrants from Guatemala, also mentioning that the United States should help Mexico in this task. He indicated that there are three causes leading Central American migration: lack of opportunities, crime and violence, and finally, corruption. Johnson added to this point by saying that part of the problem is the US’ “insatiable demand for drugs,” and that the United States needs to implement efforts to reduce that demand.

Later, Senator Carper mentioned that Delaware’s trade with Mexico is very important and gave the example of the poultry industry. He declared that Delaware exports around one of every four chickens; having Mexico as its main customer. Senator Carper and Senator Johnson also referred to the need to create stability and certainty for businesses.

The second panel was moderated by Doug Palmer, who mentioned that this has been the “craziest period” since he started covering trade issues in 2000. After Palmer asked about the importance of Mexico for the dairy industry, Jaime Castañeda indicated that Mexico is their largest partner and that the tariff threat itself negatively affected milk producers. Castañeda also mentioned that Mexico usually retaliates against cheese producers whenever there is a trade conflict between both countries. He later said that he appreciates President Trump’s efforts to help US producers, but that providing stability is the best way to help milk and meat industries.

Maria Zieba indicated that the pork industry is very export-dependent. Mexico is its largest market in terms of volume, buying $1.3 billion in 2018. Moreover, Zieba mentioned that before NAFTA, the United States was a net importer of pork. Now, it is a net exporter. She also stated that Mexico has retaliated against the pork industry in response to trade conflicts. She later explained how 2018 was supposed to be a profitable year for that industry, but they “barely broke even.” Zieba emphasized that the pork industry needs to maintain free trade with Mexico, to avoid trade conflicts, and foster stability.

Beth Hughes gave her perspective from the Dairy industry, saying that her industry imports many ingredients from Mexico, and that tariffs would increase their production costs. Palmer asked Jeff Beck about the impact of tariffs for the automotive supply chain in the United States, and Beck said that supply chains are now transnationally integrated. Beck emphasized that even a 5 percent tariff would multiply the effects. Beck mentioned that tariffs would increase the costs of each vehicle, harming consumers and car sales; he later stated that 10 million US jobs are supported by the auto industry and that tariffs cause thousands of job losses in the auto industry.

When asked about the impact of USMCA, Hughes mentioned that the dairy industry needs this agreement, and that other countries are watching if the US can pass it. She also said that it is “critical to get it done by the end of the year.” Castañeda added the importance of passing the USMCA to help negotiate other Free Trade Agreements (FTAs) with Japan, Vietnam, and Southeast Asia.

Beck and Zieba indicated how uncertainty can damage their industries, since they make significant long-term investments. For example, Zieba added, some production facilities were planned 7 years ago, when the United States was still planning to be part of the Trans-Pacific Partnership (TPP).

Castañeda also discussed the trade relationship with the European Union (EU), saying that negotiations with the EU on agriculture are unlikely for now, and that the EU is always “trying to appropriate” denominations for some products like wine and cheese. He added that the Europeans are “constantly trying to avoid the importation of products” by imposing regulatory barriers and tariffs.

Palmer asked what could happen to US exports to Mexico if the United States pulls out of NAFTA. Hughes replied that the EU and Mexico have modernized their trade agreement, and she said Mexico can also become a market for New Zealand through TPP, so in that case, those regions could take our market share; “it’s a real threat,” Hughes declared.

Panel members agreed that their industries need certainty and stability and that free trade with Mexico is very important for US dairy, pork, and auto producers. They all highlighted the economic risks of the Mexico tariffs for US producers and consumers.