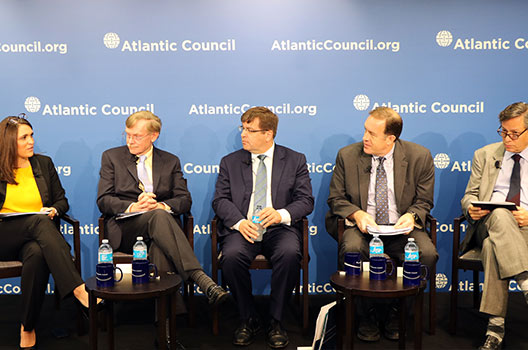 Following the end of the third round of NAFTA renegotiations, on October 5, 2017 the Atlantic Council’s Adrienne Arsht Latin America Center hosted an event to launch a new country-by-country publication “What if NAFTA Ended? The Imperative of a Successful Renegotiation”. The authors Javier Mancera, Phil Levy, Daniel Schwanen, Jason Marczak and Katherine Pereira quantify the gains and the wide-ranging implications of successful renegotiations.

The public discussion that launched the report began with an introductory statement by Director of the Adrienne Arsht Latin America Center, Jason Marczak, who highlighted that via NAFTA the US, Mexico and Canada have worked together, tripled their trade volume and significantly deepened their cultural, diplomatic, and security ties. He stated that despite these gains, we have failed to communicate the benefits of the agreement to the American people.

The Honorable Will Hurd (R-TX-23rd district) gave opening remarks and stated that trade is an issue that impacts every sector of the US economy emphasizing the importance of Mexican firms and their investment for border cities. Ambassador Bob Zoellick followed and focused on a global perspective and talked about the future stakes of US, Canada and Mexico at the global stage if NAFTA ended. He said, “pulling out of NAFTA would send a negative message to the rest of the world, by showing a US that is not willing to support openness and play by the rules.”

After his remarks, Jenny Leonard, Associate Editor at Inside US trade, moderated a panel discussion with the authors of the report Javier Mancera, Director and founding partner of De la Calle, Madrazo, Mancera, SC; Phil Levy, Senior Fellow on the Global Economy at the Chicago School on Global Affairs; and Daniel Schwanen, Assistant Vice President of Research at the CD Howe Institute to discuss the benefits of NAFTA and potential risks of an unsuccessful renegotiation.

Javier Mancera assessed the Mexican perspective in the renegotiation of the trade accord and outlined that the objectives of the Mexican government were threefold: not changing the basic structure of the agreement, keeping the provisions of NAFTA that enhanced the private sector and closing all chapters before the 2018 presidential elections. In the same way, Mr. Levy spoke from the United States point of view and emphasized that the economic effects of NAFTA had surpassed what the negotiators expected, and that multilateral mediation was still the only way to move things forward. Adding to that, Mr. Schwanen asserted that NAFTA helped create jobs, spurred investment and lowered the cost of products in the region. He also tackled concerns about trade deficits by saying “the focus on deficits ignores the fact that the gains from trade on both sides are more closely related to the volume of trade than to any deficit or surplus.”

Everyone agrees that modernizing the agreement is necessary so that it can better serve the 21st century economy, but we can’t lose sight of the jobs across the three countries that depend on a well-functioning accord like NAFTA. We hope this report serves as a catalyzing force to galvanize greater appreciation and understanding of the economic and strategic benefits of NAFTA.