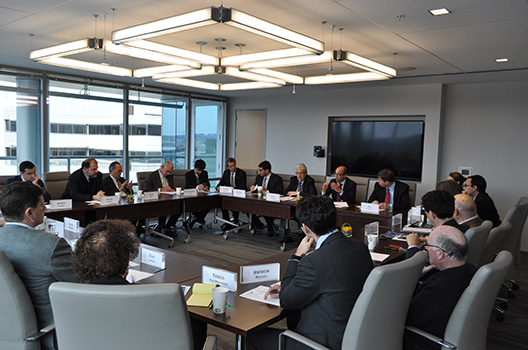 The roundtable was gathered to address questions about Greece’s short-term and long-term future, given the recently-elected new Syriza government and the ongoing debate in Europe about the extension of Greece’s financial assistance program. Some attendees feared that the trust deficit between Greece and Europe would be too great for the IMF, the EU governments, and the European Parliament to agree to extend the debt-relief program past the four month extension which was recently agreed. Others believed that a relationship could be built between Greece and its creditors, as long as specific reforms, credible commitments to implement them, and real progress was seen over the course of the next four months.

The conversation also focused on other measures Greece could undertake in order to emerge from its current crisis. While some argued for a more macroeconomic solutions to the crisis, focusing on a looser ECB monetary policy and slower fiscal adjustment, others stressed the importance of politics, enhancing reforms and ways to make Greece more productive and competitive in the future. Unfortunately, the connections between these various aspects cannot be denied. While Greece must try to attract foreign investment and increase the part of tradable goods in its business model, it must also attempt reduce unemployment, inequality, and repay their (incredibly high) debt. For a government whose primary goals are to raise minimum wages and rehire fired public servants, the task seems daunting.

This is a pivotal moment for Greece and the EU more generally. As the Syriza government attempts to work through its economic situation, questions about the role played the ECB and the IMF will emerge, as many debate what the actual way forward looks like. The EuroGrowth Conversation Series will continue to help inform the public discussion on issues like these in Washington and beyond as the situation progresses.

The EuroGrowth Conversation Series is a recurring discussion series at the Atlantic Council analyzing the prospects for European economic recovery and a forum for new and innovative ideas to be shared among leading policymakers, academics, and the private sector.