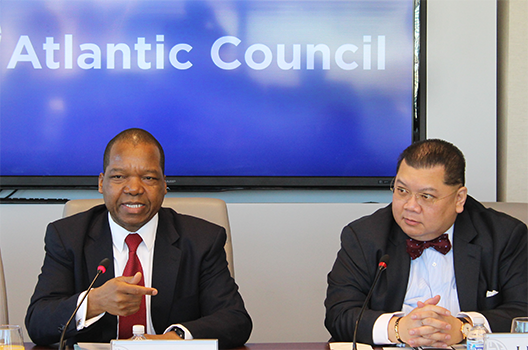 Dr. Mangudya also outlined the Reserve Bank’s strategy to re-engage the international community and settle debts. He proposed an agreement whereby Zimbabwe would be able to employ the debt-snowball method, first paying off its smaller obligations to the African Development Bank and subsequently addressing the larger arrears owed to the Paris Club and World Bank with credit facilities that would be unlocked by the earlier settlements. He called for increased cooperation from the international community to assist with this effort, adding that sanctions and other financial penalties have significantly damaged Zimbabwe’s financial sector. He also spoke on the highly dollarized economy, which he claimed subjugated the RBZ’s macroeconomic tools to those of the United States.

A discussion, moderated by Dr. J. Peter Pham, Atlantic Council vice president and Africa Center director, followed Dr. Mangudya’s remarks, which focused on the various tools Zimbabwe could use to obtain debt relief and ways to improve investment from Western and other African investors.