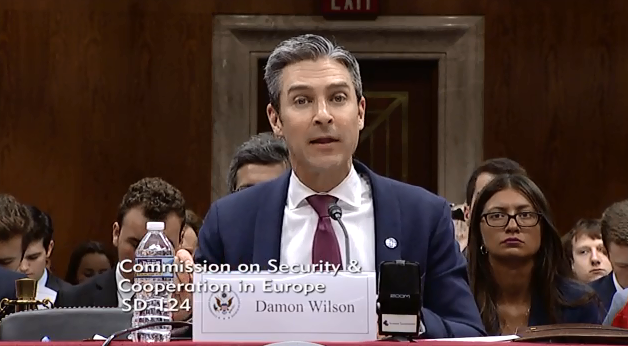 Chairman Keating, Ranking Member Kinzinger, and distinguished members of this Committee, thank you for the opportunity to testify today on the future of NATO.

This week, we will commemorate the 70th anniversary of NATO, the most successful alliance in history. The Alliance has succeeded in ensuring the peace and security of its members in large part because of its ability to adapt. So as leaders gather in Washington, it’s appropriate that this Committee focuses not on the past, but on NATO’s future.

As our nation prepares for a long period of strategic geopolitical competition, we need to put our alliances, and NATO in particular, at the core, not the periphery, of our strategy. And to make them effective, US leadership remains the key ingredient.

The United States and its allies increasingly agree that the great challenge of the 21st century will be the competition between the free world and authoritarian, corrupt state-led capitalism, especially China and Russia. If you accept this premise, US interests are best served when Washington and its allies act together. We need our allies as force multipliers for US interests and values when we face Moscow and Beijing.

For NATO, this means responding to Russia’s aggression today, while preparing for the challenge posed by China’s growing global reach.

With regard to Russia, we need to continue the Alliance’s efforts to bolster its deterrence and defense in response to a revanchist Kremlin seeking to threaten its neighbors and our allies. In my view, this requires a significant and continuous US military presence in the Baltic states, Poland, and in the Black Sea and Balkan regions, supplemented by our NATO allies. Today, our allies are forward positioned in the Baltics states; the United States is not and should be.

But the Russian challenge to us is likely to remain asymmetric. Therefore, we should double down on our support, working with the European Union, to strengthen the resilience of democratic societies through efforts that range from diversifying energy routes and supplies to democratic defense of disinformation.

At the same time, we need a common approach with our allies on how to handle China’s challenge, including by agreeing to common trade practices and approaches to set global standards, supporting our allies in establishing CFIUS-like review of foreign investments, and forging a concerted transatlantic effort to ensure the free world harnesses new technologies such as secure 5G before the authoritarians do.

In an era of great power competition, our goal should be to keep and expand our alliances.

If our aim is to keep our allies as allies, we should avoid policies that ostracize allies whether Turkey or Hungary, even as we raise tough issues. We should work to keep our allies anchored in an alliance structure that provides the security necessary for democracies to face their own difficult political issues at home.

Furthermore, this means that we should stand by NATO’s open door policy, recognizing that welcoming new members is about expanding the zone of security and the community willing to defend freedom. Enlargement to those willing and able to accept the responsibility of membership should be seen as in our interests, not just in the interests of the aspirants.

The Senate will have the next opportunity to act to welcome North Macedonia as NATO’s 30th member, demonstrating that Russia’s effort to disrupt our interests in the Balkans is failing. Looking ahead, however, we should keep an open mind with regard to additional members, whether that be other Balkan nations; Cyprus as part of a settlement; Ukraine and Georgia in such a way that Article 5 would not apply to their occupied territories; or Sweden, Finland, or Malta if their publics and governments opted for it.

While geopolitics have returned to Europe, today’s competition is global. Russia is back in the Middle East and Latin America. Witness China’s global reach.

Recognizing this reality, the United States should lead a more concerted effort to thicken the political bonds and operational ties between NATO and its global partners. Today, these partnerships are an underinvested asset at NATO headquarters; we should begin to change that. Specifically, the United States should consider formalizing the links among US treaty allies in Europe and those in Asia, namely Japan, South Korea, Australia, and New Zealand. At the same time, we should begin fostering alliance-like links among our existing allies with strategic partners such as India and, in Latin America, Colombia, Brazil, and Mexico.

Beginning to build a network of alliances now with the United States at the center would provide a more capable and intentional global democratic response to the authoritarian challenge. Doing so could also be a precursor to a more formal alliance among democracies who are committed to protecting their way of life and a democratic international order.

As NATO leaders begin arriving in Washington today, no doubt much attention will focus on which allies are making strides toward their defense investment pledges. And rightly so. While much more remains to be done, since 2016, European allies have spent an additional $41 billion in defense; through 2020, they will spend an extra $100 billion; and their plans call for an additional $350 billion through 2024.

That said, I am concerned that the current burden-sharing debate misplaces the focus on what’s strategically important and potentially undermines the Alliance’s credibility.

The United States, the United Kingdom, France, and Germany account for 86 percent of total NATO defense spending. Given that the United States and United Kingdom spend over 2 percent of GDP on defense and France is close, we are having a debate about what amounts to 14 percent of NATO’s total defense expenditure plus Germany. The current political debate is outsized relative to its strategic importance, in terms of delivering the capabilities the alliance needs to act. Furthermore, excessive focus on burden-sharing risks perpetuating questions about the Alliance’s credibility and stoking doubts among the US public about NATO. The United States is right in expecting its allies to do more; but we need to remember that our own efforts are in our interests; they are not acts of charity.

To conclude, in an era of geopolitical competition, America’s friends and allies are the United States’ best competitive advantage. Viewing our alliances that way would compel consistent policies to lead our alliances to ensure united fronts in standing up to Russian and Chinese aggression. Our defense strategy should inevitably drive Washington to bolster and expand its alliances.

Indeed, Congress, the administration, and the American people should view our alliances as national strategic assets. As such, each administration serves as a steward of these assets with a responsibility to defend, strengthen, and lead them.

US leadership after all is the decisive element in determining the success of NATO’s future.

Thank you for the privilege to testify today. I look forward to your questions.