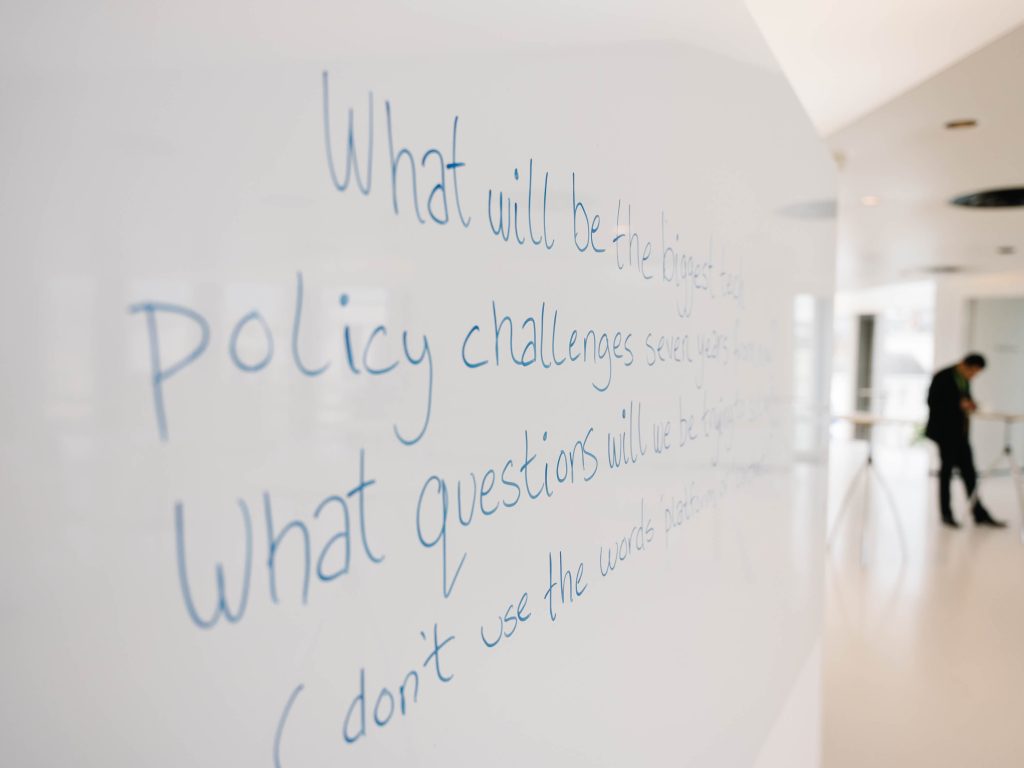 The second and final day of the DFRLab’s annual 360/Open Summit event—and all of the captivating discussions—has come to a close. If you missed the day’s events, below you will find short recaps of each session. You can find coverage of the first day here.

The second day of 360/OS began with a discussion between Taiwanese Digital Minster Audrey Tang and Persephone Miel Fellow Laís Martins. Tang likened harsh crackdowns on online spaces to COVID-19 lockdowns. Instead, governments should strive to create “vaccines” that prevent viral disinformation, she said. The most effective “vaccine” to counter disinformation is to empower internet users and promote digital literacy. Informed users are less likely to believe and share disinformation.

The next session featured a conversation about how disinformation threatens democracy and what strategies can ensure elections remain fair and balanced. The discussion was moderated by Julia Brothers, senior advisor at the National Democratic Institute. She was joined on stage by Vukosava Crnjanski, founder and director of the Center for Research, Transparency, and Accountability (CRTA); Caio C. V. Machado, director of Instituto Vero; Anis Samaali, an electoral observation expert with the European Centre for Electoral Support; and Ellen Weintraub, commissioner of the US Federal Election Commission. Civil society organizations and citizen observers who independently assess elections require better access to Facebook ads data, said Samaali. They need to be considered real stakeholders because they are the ones who maintain the integrity of elections.

Panel | Investing in a secure, democratic digital future for all

Next up, Jochai Ben Avie, co-founder and chief executive of Connect Humanity, moderated a discussion about the need to improve connectivity around the world and the dangers of China spearheading telecommunications networks in the Global South. Panelists included Catalina Escobar, co-founder and chief strategy officer at Makaia; Mark Gitenstein, the US ambassador to the European Union; and Malavika Jayaram, the executive director of Digital Asia Hub. The United States can’t match the contributions China makes in Global South infrastructure, said Gitenstein, but with more input from private businesses, progress could be made. However, Escobar noted that many of the “big investors” are putting money into high-end tech products, like the metaverse, which will only widen the gap between the connected and unconnected world.

Will democracies make the investments in digital equity needed to expand access to health and education, political participation, and economic opportunity?

Digital violence is the number one barrier to women participating in public life. Here’s how to start fixing it.

Just 16 percent of women in politics said they received a timely and effective response to escalations of digital violence. It’s time to fix that, say panelists at 360/Open Summit.

Panel | The Digital Services and Markets Act package: What happened, and what comes next?

Next, representatives from the European Commission’s Directorate-General for Communications Networks, Content and Technology (DG Connect) spoke with Kate Klonick, assistant professor at St. John’s University School of Law. Having helped craft the Digital Service Act and Digital Markets Act, Prabhat Agarwal, head of the Digital Services and Platforms Unit at DG Connect, and Gerard de Graaf, director of digital economy and coordination at DG Connect, shared their insights on the support they received for their proposals to hold platforms more accountable. They said that the acts would see multi-layer enforcement involving not just state regulators but also civil society actors as agents of change.

Two of the leading Digital Services Act and Digital Markets Act drafters talk about the future of the policy package—and how citizens will be key to helping bring about transparency and accountability online.

A collaboration between the DFRLab and RightsCon saw US Secretary of State Antony Blinken interviewed by Nobel Peace Prize recipient, journalist, and founder of Rappler Maria Ressa, with opening remarks from Rob Berschinski, special assistant to US President Joe Biden. They discussed the role of governments in protecting human-rights defenders online, and the use of technology and information in crises. Making major news, Blinken announced that the United States will become the chair of the Freedom Online Coalition for the first time. He called for capacity-building measures for global actors in order to combat the threat from mis- and disinformation. Meanwhile, Ressa stressed that the next few years are crucial for the survival of democracy and what is urgently needed is a positive, affirmative, and democratic vision of technology in the twenty-first century.

As the threat of malicious foreign interference in domestic affairs becomes more significant with each passing day, Leah Bray, the Acting Coordinator at the Global Engagement Center (GEC) under the US Department of State shared the work done by the Center. With virtually no barrier to entry, state and non-state actors now have the means to inject deception and confusion into the nervous system of society on a scale and rapidity that eclipses anything seen before, Bray said. Focusing on how Russia has weaponized technology against the world, Bray said that disinformation has become a staple of Russia’s geopolitical strategy.

The next session discussed how influence operations and threat actors recycle strategies and narratives across different parts of the world. Panelists included David Agranovich, director of global threat disruption at Meta; Alicia Wanless, director of the Partnership for Countering Influence Operations at the Carnegie Endowment for International Peace; and Min Hsuan Wu (aka “Ttcat”), co-founder and CEO of Doublethink Lab. Lizza Dwoskin, Silicon Valley correspondent at the Washington Post, led the panelists through a conversation that called on platforms to confront their own role in protecting users in different cultural contexts. They all agreed that the answer lies in transparency and open data sharing through regular operational reports that are made available to governments and the public alike.

The war in Ukraine shows the disinformation landscape has changed. Here’s what platforms should do about it.

Panelists at the 360/Open Summit discuss whether information threats like malign foreign influence or disinfo-for-hire firms are becoming more diffuse.

As Russia continues its military campaign in Ukraine, Baiba Braže, assistant secretary general for public diplomacy in NATO’s Public Diplomacy Division, shared how informational threats have forced NATO to adapt and engage in new ways. Regardless of how Ukraine wins its war of liberation, “we face a new reality,” she said. During her remarks, she stressed the need to defend NATO’s values in the digital space, adding that the open-source research field is at the forefront of defense in our information spaces. Recognizing that no government can individually address the threats, she said that NATO is bringing the trans-Atlantic community together to develop common standards.

Panel | How sovereign hammers are fracturing the internet, and what democracies can do about it

In the final session of the conference, Kat Duffy, nonresident fellow with the DFRLab, moderated a discussion about fractures in global policies about the internet and what that means for the world. She was joined by Kenton Thibaut, DFRLab resident China fellow; Usama Khilji, executive director of Bolo Bhi; and David Frautschy, senior director for European government and regulatory affairs at Internet Society. All panelists agreed on the importance of digital sovereignty for national security. Highlighting the role of China and Russia, Thibaut said that where China seeks to transform the system, Russia seeks to disrupt it. Khilji noted that products built for censorship were being made in Western democracies and exported to repressive regimes. With more and more countries taking inspiration from each other in digital authoritarianism, the solution lies in reinvesting, doubling down, and innovating on how to support multi-stakeholder engagement.