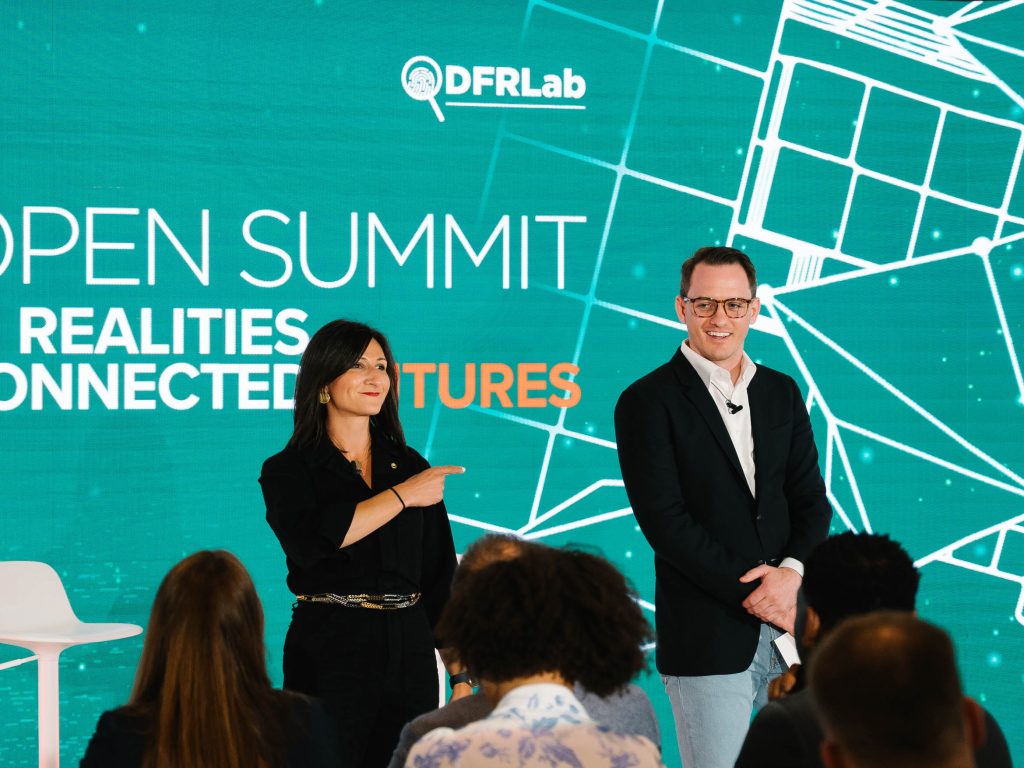 The first of two exciting and jam-packed days is complete. If you missed the day’s events from the Digital Forensic Research Lab’s 360/Open Summit, catch up below with brief descriptions of each session, alongside videos and links to supplemental content.

Lightning Talk | False start: How the Kremlin lied its way to war

The first session of the day featured the DFRLab’s own Roman Osadchuk, Nika Aleksejeva, and Ingrid Dickinson. Osadchuk dialed in from Ukraine to discuss Russia’s online attacks on his home country and the real-life impact they have, saying “Russians do horrible things to Ukrainians, partially because they [Russians] were taught they [Ukrainians] were not human.” After the brief question-and-answer session with Osadchuk, Aleksejeva and Dickinson previewed the work they’ve been doing looking at Russia’s narrative build-up in advance of its invasion of Ukraine. The research will be presented as a report at a later date.

Panel | Another open-source record of war

Next up, a panel discussing how open-source information can aid in the documentation of war crimes. The panel featured Liubov Tsybulska, founder of the Centre for Strategic Communications and Information Security in the Ministry of Culture and Information Policy of Ukraine; Charlotte Godart, investigator and trainer with Bellingcat, dialing in remotely; and Janis Sarts, director of the NATO Strategic Communications Centre of Excellence. Alice Stollmeyer, founder and executive director of Defend Democracy, served as moderator.

The morning session closed out with another Lightning Talk, this time featuring DFRLab Assistant Director Jacqueline Malaret, Resident Senior Fellow Emerson Brooking, and Anchor Change CEO Katie Harbath, who discussed the role social media platform policies play in times of war. “Platforms are actors in conflict,” said Brooking. The unprecedented actions taken by platforms against Russia after the invasion of Ukraine immediately affected how the Russian government and its propaganda apparatus could spread messages. They also impacted how Ukrainians could communicate their plight with the outside world.

Panel | Digital authoritarianism on the open market: The case of the NSO Group

In the afternoon, Miranda Patrucic, deputy editor in chief of regional stories and Central Asia at the Organized Crime and Corruption Reporting Project, moderated a discussion about digital authoritarianism, exploring the impacts of software like the NSO Group’s Pegasus spyware. Panelists included Carine Kanimba, an activist and chief of staff at Flat World Partners; Donncha Ó Cearbhaill, the acting head of Amnesty International’s Security Lab; and Szabolcs Panyi, investigative journalist at Direkt36. “These tools are open for misuses, not just by different authoritarian governments, but also by democracies worldwide,” noted Patrucic.

Journalists and citizens targeted by spyware warn the audience at the Digital Forensic Research Lab’s 360/Open Summit about the proliferation of state-sponsored digital surveillance.

In the next session, Alex González Ormerod, the Latin America editor at Rest of World moderated a discussion about the challenges platforms face when moderating non-English content—and what potential solutions exist. Panelists included Marwa Fatafta, MENA policy manager at Access Now; Scott Hale, director of research at Meedan; and Dragana Kaurin, the founder of the Localization Lab. Panelists noted that solutions to improve content moderation practices exist but that there is a lack of willpower to make the necessary changes. For Kaurin, transparency is one of the most urgent needs, not only in policy decisions but also in implementation: “Being accountable to users is the most important thing.”

Political and digital-rights activist Chung Ching Kwong shared how the Hong Kong government has weaponized technology to surveil and repress defenders of democracy by passing its draconian national-security law. With access to online information massively restricted, Hong Kong has been trapped in a black box where every action is monitored, and citizens are subjected to the same tactics employed by China in Xinjiang province. Detailing the extent of digital authoritarianism in Hong Kong, Chung Ching Kwong encouraged others to imagine technological systems where users are not seen as products and invasive data collection is disincentivized.

Next up, a panel discussed the future of the internet—specifically Web3 technologies—and what it means for democracy. Featured in the panel were Alex Zerden, adjunct senior fellow with the Energy, Economics, and Security Program at the Center for a New American Security; Nanjira Sambuli, a fellow in the Technology and International Affairs Program with the Carnegie Endowment for International Peace; and Cathy Mulligan, professor of computer science at the Instituto Superior Técnico, University of Lisbon; with Khushbu Shah O’Shea, editorial director at Rest of World, serving as moderator. The panelists sought to separate facts from hype when discussing Web3, pointing out that there is a substantial conflict between the claims made about the “decentralization” of the internet and the reality of equal access for all. Even in this brave new world, the question remains: Who gets to hold the power?

The decentralized digital world is on the rise; here’s what that means for political, economic, and social rights worldwide.

Nathaniel Gleicher, head of security policy at Meta, outlined the advantage enjoyed by adversarial threat actors but highlighted how a corresponding “defender advantage” also exists. According to Gleicher, an attacker’s advantage is one-off, comprising the ability to surprise and do so quickly, but defenders enjoy a stronger advantage—one of strategy and time. He said that employing public disclosure and transparency as a form of deterrence often weakens the effectiveness of threat actors.

No conversation on connected futures is complete without a deep dive into the world of augmented reality and what life looks like in the metaverse. Our final panel of the day featured Daniel Castaño, founding partner at Mokzy; Kat Lo, content moderation lead and product researcher with Meedan; and Kimberly Voll, co-founder of the Fair Play Alliance, in conversation with DFRLab Nonresident Fellow Brittan Heller. The panelists agreed that the age of immersive technology is here but also sounded alarms on the harms that come from operating in a system where bodily autonomy doesn’t exist but the trauma is the same.