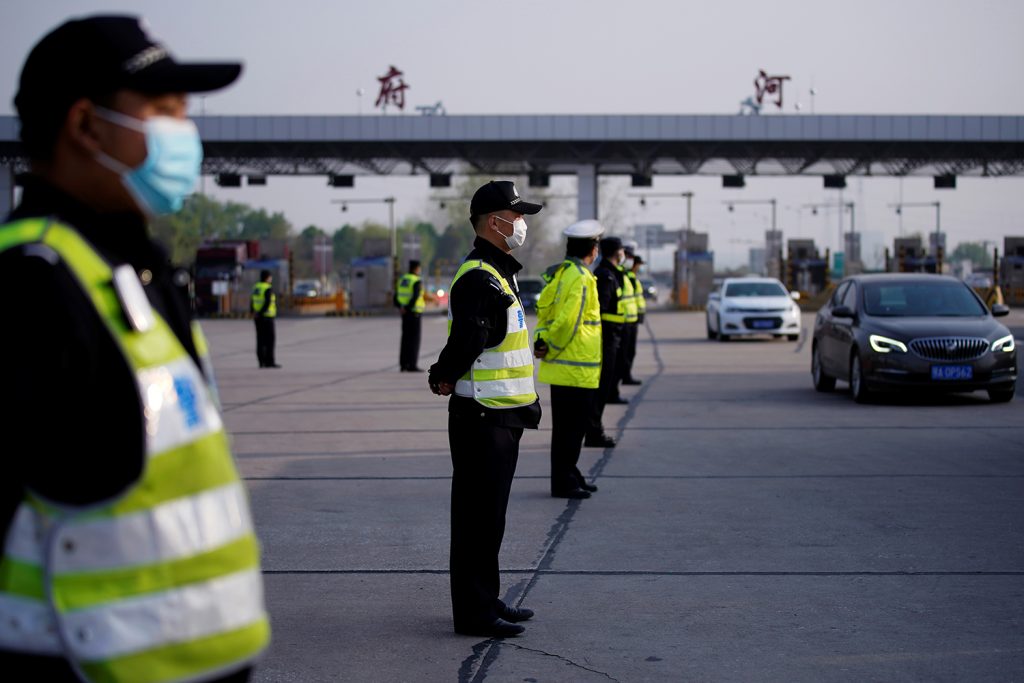 Police officers stand guard at a toll station of an expressway after travel restrictions to leave Wuhan, the capital of Hubei province and China's epicentre of the novel coronavirus disease (COVID-19) outbreak, were lifted, April 8, 2020. REUTERS/Aly Song

Before COVID-19, there were three trends occurring in the world that challenged the Westphalian notion of nation-states with complete sovereignty over citizens within their borders. The Westphalian ideal is the pattern of nation-states, with a rule of law defined by geographical borders, that emerged out of the Thirty Years War in Europe and replaced a patchwork quilt of overlapping medieval loyalties with more solid blocks of unitary rule under the rule of a sovereign.

Pre-COVID, the three accelerating trends that challenged this Westphalian notion of nation-states were:

Now in the turbulent COVID-19 era, these trends are being challenged and it is unclear if the post-COVID era will strengthen the idea of Westphalian nations states or result in some completely new way of organizing.

The first accelerating trend was that of the Internet and increasing transnational digitalization. In December of 2019 Internet adoption passed the “fifty percent mark” where now more than half of the humans on Earth have access. Recognizing that means a still sizable population of humans do not have access to the Internet yet, even for those who do not, many humans do have access to mobile phones. The Internet’s challenge to the Westphalian notion of nation-states comes from the difficulty of identifying where a packet of information is on the Internet. Europe’s Global Data Protection Regulation (GDPR) probably is the most visible example of an effort to extend extra-territorial sovereignty to EU members beyond the physical borders of the EU. GDPR expects businesses physically located outside the EU to comply with GDPR if they engage in business with any individual from the EU. Moreover, if any individual from the EU is traveling in a foreign nation, that nation and business also are expected to comply with the GDPR when engaging an individual EU abroad.

The second pre-COVID-19 accelerating trend was increasing global commerce. Transnational corporations now wield as much, if not more, power than nation-sates. As of mid-2019, the total market capitalization of the five “FAANG”s (Facebook, Apple, Amazon, Netflix, and Google) hovered near $3.2 trillion. At the time that was more than the total world economy of all but four countries: the United States, China, Japan, and Germany. When trans-national corporations are this large, it is not clear whether nation-states or corporations have more geopolitical power.

The third trend was the challenge of the global flow of humans, plants, animals, and infectious diseases: public health does not stop at geographical borders. Yes, if borders are closed completely, as COVID-19 seems to be prompting several nations to do, then some infection control can be done relative to humans (animals vectors are another story though)—however if borders are closed then globalization as we know it is over. When borders are open, the risk of infectious diseases traveling past geographical boundaries exists. This is not just a concern for natural pathogens, as we enter the next decade of personalized medicine, we also should be aware that the same precision bio-related technologies can also be used for personalized poison that spans geography.

The COVID-19 challenge of globalist trends

Prior the pandemic, the next decade looked like it was going to continue the challenges to the traditional notion of Westphalian nation-states as the world became increasingly connected via the Internet, global commerce, and the flow of humans, plants, animals, and other bio-related material.

Now, without a doubt, COVID-19 has challenged at least one leg of those three trends: border control for infectious diseases. Borders are closing as a result of the pandemic and reminding leaders around the world about the power of geographical borders enforced by governments.

At the same time, the second trend of increasing transnational commerce is challenged. This is especially true for non-digital services and goods, which have effectively ground to a halt with the COVID-19 pandemic. While commerce exists, transnational supply chains are being rethought given the public health risks and the future might include more distributed, local production vs. wherever is cheapest to provide the goods or services on the planet. In some ways this might be good both for local economies and for reduced carbon footprints.

And finally, the first trend also is challenged. We have seen the rise of authoritarian regimes geo-fencing their nation’s Internet for control purposes. China and North Korea are two notable examples, with other Middle Eastern nations demonstrating the ability to cut-off their populations’ access to the Internet should the government decide it necessary. Russia also demonstrated last year the ability to cut the country off from the main Internet should the government decide to do as such. Even in Europe, some political officials now are finding GDPR introduces challenges with tracking the spread of the pandemic in part due to a lack of clarity about what health data could be collected when and under what circumstances during a pandemic.

If not nation-states post-COVID, then what?

Before COVID-19, for transnational corporations providing digital services—aside from the challenges of a fragmented Internet as highlighted earlier—global data governance increasingly was becoming fragmented. Different standards, at times contradictory such as guidance from GDPR and California Consumer Privacy Act, now exist and make global digital commerce difficult. China’s proposed a law last year making all data, including data of foreign individuals and companies, which would make this even more difficult.

Post-COVID however, digitization seems to be the future. Physical factories that require humans to be present to operate appear to be liability during a pandemic. Moreover, digital services seem well-positioned to thrive in either in pandemic or normal operation settings. Now that the world has demonstrated how quickly it can pivot to a significant number of people working from home and receiving services delivered to their home, both private and public sector leaders presumably will be preferring increasingly digital goods and services. This includes automation and robots to produce physical goods as well. China recently claimed that 37 percent of their retail sector was digital compared to 11 percent of the United States.

These technological and economic trends linked to COVID-19 may be the collective straw that breaks the proverbial camel’s back when it comes to the post-World War II international order. Will nation-states remain relevant in what comes next, or will the tension between globalism—that was present before COVID-19—and the realpolitik that is COVID-19, result in something different than nation-states?

One structural possibility is hyper-regionalism, defined by what technological, commercial, and protective flow of humans, animals, and plants arises. This could be embodied by mega-cities becoming dominate geopolitical actors, dramatically redesigned in the future to provide essential services in a more resilient fashion to future pandemics and other natural disasters, defined less by national identity and more by what they provide those individuals who live within the municipal areas. Mega-cities of the future, empowered by technology to provide for those within the immediate vicinity and capable of responding at faster speeds than nations, would forge their own trade agreements, public health arrangements, and climate change accords with other cities globally, via direct diplomatic relations—or a devolution away from large nation-states to smaller regional powers defined by identity, as seen historically to a degree in the Balkans during the 1990s.

Another possibility is transnational groups, organized either by ideology or corporate identity, replace the concept of Westphalian nation-states defined by geography. In a post-COVID world, as we move towards recovery there will be a need for individuals who travel to validate that they are not infectious nor pose a risk to others. Technological solutions may arise tied to a person’s passport, or services may arise tied to a person’s place of employment, commercial laboratory testing service, or some other global mechanism similar to how anyone can become an e-resident of Estonia without residing in or being a citizen of Estonia. The challenges of ensuring individuals are “safe to travel” and goods are “safe to cross borders” may strain the Westphalian nation-state model past its breaking point and replace it with something that is more network-centric in nature.

Signs and portents to watch

To spot faster what replaces the Westphalian notion of nation-states, here are some important “early indicators” to watch as portents for the future:

Such signs and portents will indicate what the next decade has in store in terms geopolitical trends. In addition, post-COVID trends will be accelerated by the younger generations of the world, born after 1977, who have grown-up with the Internet and may have more friends online then they do in their physical neighborhoods. While younger generations in the United States and Europe have not necessarily benefited from the post-World War II economic boom—and have experienced the financial recessions of 2001, 2008-09, and now COVID-19’s recession—they have benefited from the fairly peaceful world, compared to the eras of World I and World War II. This may lead the younger generation to favor new models of organizing that allow them address what they see as the unanswered problems of 2020: widening economic disparities and increasing debt, climate change, and the need to ensure future pandemics do not occur.

One thing is certain: we live in interesting times.

David Bray is director of the Atlantic Council’s GeoTech Center.

We can build an immune system for the planet

Our approaches for pathogen detection & antigen development are too slow. Using high-speed computers, biosensors, and the Internet, we can universalize and automate the process for pathogen detection and antigen development, such that we can automatically sense an abnormal pathogen and immediately start synthesizing in a computer’s memory techniques to mitigate it. Once an abnormal pathogen is detected, we can automate the antigen development (e.g., phages, e. coli that eat other e. coli, and more) to have a solution ready much faster for possible use than conventional means. We can build an auto-immune system for the planet.

A massive nationwide testing program could help slow the spread of the novel coronavirus (COVID-19) and could provide a roadmap for rolling back the extensive social distancing measures implemented across the United States and around the world, according to Nobel laureate economist Paul Romer and Dr. Raj Shah, president of The Rockefeller Foundation and former administrator of the United States Agency for International Development (USAID).

Lessons from Taiwan’s experience with COVID-19

Early intervention, a flexible command structure, a comprehensive epidemic prevention strategy, integrated medical big data, and proactive information disclosure allowed Taiwan—which at its closest point is only eighty-one miles (130 kilometers) away from China and has a very high population density—to record only a few confirmed cases in recent months. There are a number of lessons to be learned from the Taiwanese government’s effective response to COVID-19 that should be shared with other parts of the world fighting the ongoing pandemic.