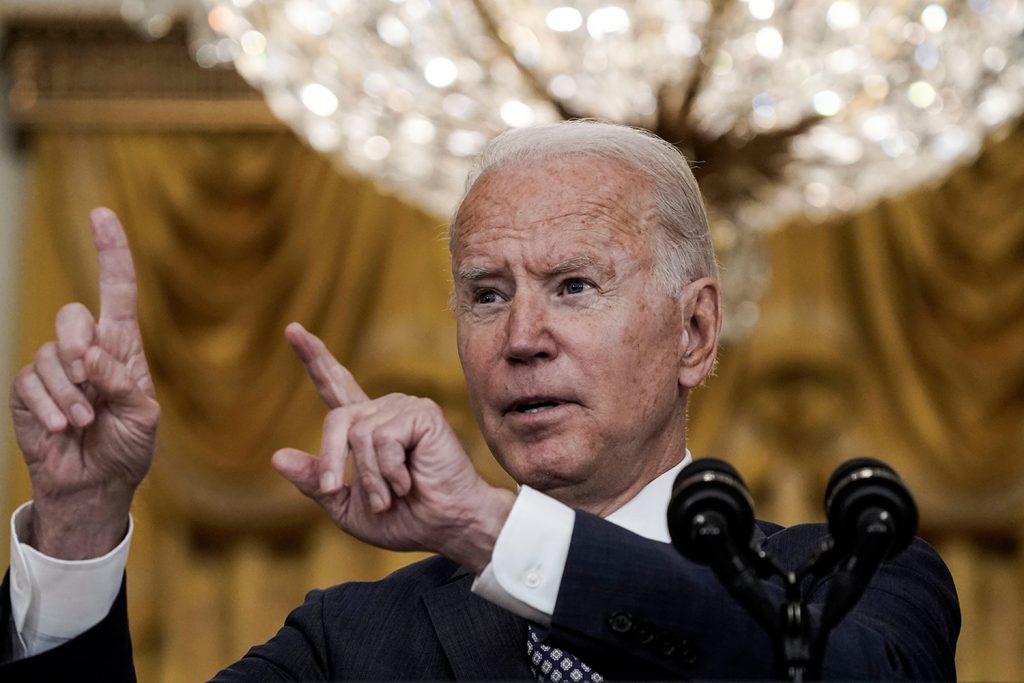 At the end of the worst week of US President Joe Biden’s young presidency, this is the question he must urgently answer: Of all the problems that his Afghanistan troop withdrawal decision has generated, which is most significant?

Lay aside for the moment the ever-popular Washington blame game about who is responsible for not anticipating the rapid Taliban takeover and the collapse of the democratically elected Afghan government and its army. Or why the Biden administration didn’t better facilitate the safe evacuation of US citizens and their endangered Afghan allies.

It will be crucial over time to digest the lessons learned from our past twenty years in Afghanistan, so we don’t repeat the many mistakes that have been made. However, even that discussion must take a backseat to the urgency of dealing with the immediate risks, their implications, and the decisions that could control the damage.

Doubt over “America is back”

The most compelling answers to the question of what Biden “dare not ignore” in Afghanistan fall roughly into three categories: the danger posed to the Biden presidency’s defining “America is back” narrative, the risks that grow from questions about US competence and commitment, and the likely terrorist resurgence alongside the urgent need to decide whether to work with or against the Taliban.

Chief among all of these is the existential threat to Biden’s most inspiring and reassuring narrative to allies and fellow democracies that the United States is once again a reliable ally and partner, following the uncertainties that grew among them during the Trump administration.

The consequences from this threat would outstrip all the others posed by the Afghanistan situation in an era that Biden himself characterized as an “inflection point” in history, defined by a systemic contest between democracy and autocracy.

“We are in the midst of a fundamental debate about the future and direction of our world,” Biden said on February 21 at the Munich Security Conference, the receptive virtual audience grateful for this “America is back” embrace of allies following the cold shoulder of former President Donald Trump’s “America First” agenda.

“We’re at an inflection point,” Biden told them, “between those who argue that, given all the challenges we face—from the fourth industrial revolution to a global pandemic—that autocracy is the best way forward… and those who understand that democracy is essential—essential to meeting those challenges.”

The danger now is that Biden could be confronting an inflection point of a different sort, where democratic allies’ doubts about US reliability grow, where the fragile Afghan democracy becomes an unfriendly theocracy, and where adversaries further test Washington’s resolve in places like Ukraine for Russia or Taiwan for China.

“At a certain point of time, the White House may not even remember about its supporters in Kyiv,” said Nikolai Patrushev, Russian President Vladimir Putin’s top national security advisor, in an interview. He added that Ukrainians shouldn’t rely on the United States because one day Ukraine would be abandoned just like Afghanistan.

The Global Times, which often acts as a mouthpiece for China’s leadership, played up the notion of US unreliability in a Monday editorial: “Once a war breaks out in the [Taiwan] Straits, the island’s defense will collapse in hours and the US military won’t come to help.”

Wrote Chinese state news agency Xinhua: “Following the blows of the global financial crisis and the COVID-19 pandemic, the decay of the American hegemony has become an undisputed reality. Its failure in Afghanistan is another turning point in that spiral fall.”

It is unsurprising that Russia and China would make the most out of Afghanistan in their psychological operations and propaganda. More concerning, though, are the doubts among America’s staunchest allies. Many of them had been deeply relieved by Biden’s election. Now they complain that their countries, some of which had troops in Afghanistan dependent on US partnership, weren’t consulted ahead of Biden’s April announcement of troop withdrawal.

A new fissure in NATO solidarity

As disturbing as Trump’s rhetoric toward allies was, his administration’s actions were often reassuring. The opposite is true in the case of the Biden administration, where the rhetoric has been reassuring but the unilateral actions regarding Afghanistan have been unsettling to European ambassadors in Washington.

Lord George Robertson, who was NATO secretary general when the alliance on September 12, 2001, invoked Article 5 of the North Atlantic Treaty for the first time, declaring that the terrorist attack a day earlier on the United States would be seen as an attack on all nineteen countries in the alliance.

“There was a moment of unique solidarity,” he said at the Atlantic Council on Friday. “I felt proud of the organization I had the privilege of leading at the time. My sentiment this week is the opposite. I don’t feel proud. I feel ashamed because that solidarity seems to have gone. The principle of we all go in together and we all come out together seems to have been completely lost.”

He spoke of how everything accomplished over the past two decades was at risk—the elimination of the terrorist threat, the education of women and girls, and advances toward, if not a Western democracy, a more civilized and tolerant Afghanistan normality.

The alliance solidarity of that time, Lord Robertson said, “has been crushed by the unilateralism of the United States president, and I regret that because I’ve known Joe Biden for many, many years, and [the] man of wisdom and talent he is. But this act of recklessness has prejudiced and weakened NATO in ways from which we’re going to find it difficult to recover.”

In December, shortly after Biden’s election as president, I argued, “Joe Biden has that rarest of opportunities that history provides: the chance to be a transformative foreign-policy president.”

It never struck me at the time that Afghanistan could emerge as the biggest obstacle to Biden’s ability to play that historic role. But that’s where we find ourselves today.

Biden must bring competence and humanity to Afghan evacuation efforts. He’s got to manage the aftermath of the Taliban takeover and potential terrorist threats, all while facing the generational challenge from China and authoritarian resurgence.

He should start by making it clear through actions, not just rhetoric, that he intends to work closely on all matters of common concern—whether it’s framing China policy or Taliban engagement—with the allies he neglected on his way out of Afghanistan.

#1 Liberal Democracy Is Worth A Fight
Anne Applebuam | THE ATLANTIC

Anne Applebaum, one of the finest writers on democracy today, uses the US withdrawal from Afghanistan to make an important argument about the dangers that face liberal democracies that increasingly discard military options.

In Afghanistan, she writes, the Taliban understood that “[t]here was a military solution, and the group has been waiting for a long time to achieve it.”

“Now,” she writes, the Taliban “will convert the violent extremism of its movement into a violent, autocratic, tyrannical state.” Worse, she warns, the Taliban’s patience and determination in winning the war “provides a useful reminder that while we and our European allies might be tired of ‘forever wars,’ the Taliban are not tired of wars at all.” Read more →

Philip Stephens’s analysis of how the effect of Biden’s unilateral withdrawal from Afghanistan has damaged the US relationship with allies is a must-read.

The unliteral withdrawal from Afghanistan “sits uneasily with Biden’s ‘America is back’ rhetoric,” Stephens writes, “and it positively jars with his idea that the US can recast itself as the champion of freedom and democracy. In deciding to devote all its energies to the contest with China, the US has left behind the moral high ground.” Over the course of the Cold War, the moral high ground was one of the United States’ greatest strengths—and abandoning it could prove costly. Read more →

In a compelling interview with the New Yorker’s Isaac Chotiner, David Petraeus, one of the most accomplished US military leaders of our times (and an Atlantic Council board member), provides a searing analysis of the American failure in Afghanistan.

Petraeus argues that it is an injustice to blame the Afghan security forces alone for the Taliban’s rapid progress. “So to say that the Afghans won’t fight for their country needs an asterisk,” he tells Chotiner. “And it should say the Afghans will fight for their country if they are confident someone has their back and will provide reinforcements of ammunition, food, medical supplies, will provide emergency medical evaluation, and, most importantly, will provide close air support to get them out of a tough fight.”

As the Washington blame game escalates, this interview is worth reading. Read more →

A slightly different perspective comes from Francis Fukuyama’s reflective essay in the Economist this week. Fukuyama argues that in the long-term, the US withdrawal from Afghanistan may not affect much; far more concerning for US international prospects are the country’s immense internal divisions.

As the world reverts “to a more normal state of multipolarity…” Fukuyama warns, the “challenge to America’s global standing is domestic: American society is deeply polarized.” We are at an inflection point where US leadership has never been more important—but also where it has never been less certain. Read more →

Some of the most penetrating Afghanistan work is being done by Atlantic Council staff and senior fellows.

Josh Lipsky, director of the GeoEconomics Center, and William Wechsler, director of the Rafik Hariri Center and Middle East programs, deliver a cutting-edge look at the financial front of the Taliban takeover that the Wall Street Journal played as its lead op-ed.

The Taliban’s next move, they write, “[is] a push for money and legitimacy”—involving nine billion dollars in currency reserves on hold by the Afghan central bank. They track how bodies like the International Monetary Fund should respond—and what the Biden administration and international community ought to do. Read more →

Elsewhere, Atlantic Council analysts investigate everything from the prospect of al-Qaeda’s resurgence and the military strategy that brought the Taliban success, to the response of adversaries and allies. Click here for access to the collected wisdom.

Will digital money belong to democrats or despots?

As democracies engage in long and robust debates about the tradeoffs and risks of CBDCs, authoritarian governments continue to push forward with a simpler, centralized vision that strengthens their grip on power with significant geopolitical and human rights implications.

Image: US President Joe Biden delivers remarks on evacuation efforts and the ongoing situation in Afghanistan during a speech in the East Room at the White House in Washington, DC on August 20, 2021. Photo via Ken Cedeno/Reuters.