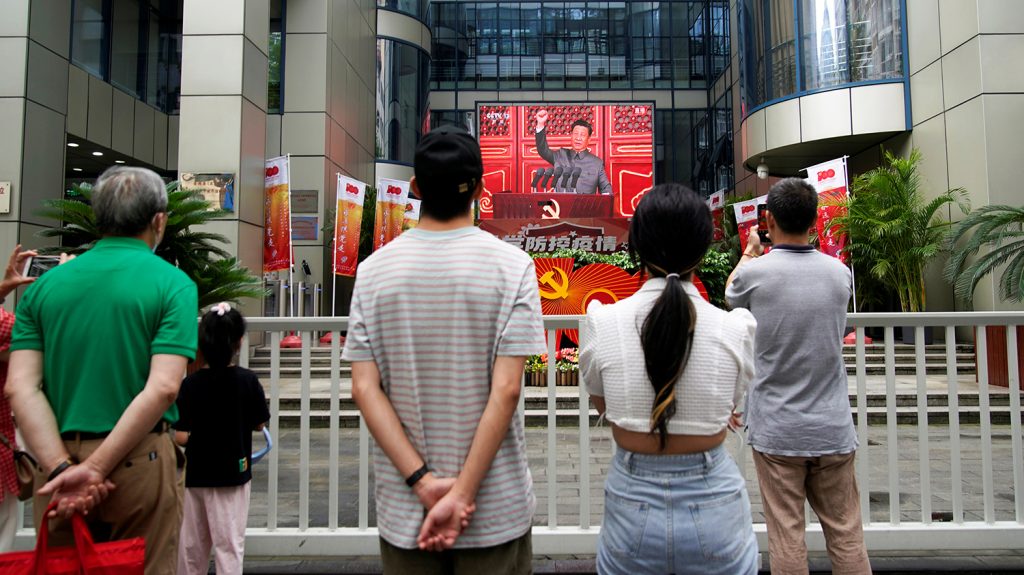 The United States and China represent the most significant—and potentially most perilous—bilateral relationship in human history. Given that reality, neither side is managing their rising tensions with adequate skill or durable strategy.

That’s the way Stephen Heintz of the Rockefeller Brothers Fund put it in a conversation with me a couple of days ago. It is also the subtext of conversations I’ve had with world leaders visiting Washington, DC, this past week for the International Monetary Fund (IMF) and World Bank meetings.

US-Soviet relations defined the Cold War, with both sides fielding the unprecedented nuclear capability to devastate each other and much more. Before that, the Anglo-American relationship was decisive, from intense competition between the United States and Britain in the nineteenth century to an alliance that prevented fascist victory during World War II in the twentieth century.

Yet Heintz’s argument is compelling in that US-China relations have a historically unique significance based on their multi-dimensional nature that touches on just about every aspect of global affairs now and into the foreseeable future.

That’s true whether you’re concerned about world war, the global economy, climate change, human rights, the contest between democracy and authoritarianism, the future of space, or the accelerating race for technology’s commanding heights. Never has so much across the world rested so heavily on two countries’ abilities to manage their relationship across a dizzying array of domains.

The accuracy of data related to China’s economy, which for many years has been the biggest driver of global growth, took center stage at the past week’s IMF and World Bank meetings. The controversy focused on allegations that IMF Managing Director Kristalina Georgieva pressured colleagues, while she was a top official at the World Bank, to find a way to boost China’s standing in the organization’s flagship 2018 “Doing Business” report.

Georgieva has denied any wrongdoing. The IMF board, which convened eight times to consider her fate, conducted a review of the allegations that “did not conclusively demonstrate that the managing director played an improper role.” The board reaffirmed its confidence in Georgieva’s leadership, but the controversy is likely to continue.

The subtext is that any international-institution leader must manage the reality that China will increasingly act to influence, lead, or replace the world’s most significant multilateral bodies—in this case, one of the world’s lenders of last resort.

This week, senior government officials in Washington, DC, representing the world’s most important economies, had plenty else to worry about: an unfolding energy crisis, rising inflation, slowing growth, and increasing climate concerns ahead of the 2021 United Nations Climate Change Conference, or COP26, that begins on October 31 in Glasgow, Scotland.

A senior official from one of the most significant US allies, speaking anonymously, said all of this has been made more difficult to manage due to the growing volatility in US-China relations, generated by both the countries’ differences and their domestic realities.

China is lurching in a more authoritarian direction at home and toward more confrontational policies abroad as it flexes its regional and global muscles. Amid messy and polarizing US politics, following a badly executed withdrawal from Afghanistan, and with a lack of clarity about US strategy toward Beijing, partners wonder about US commitment, competence, and capability for global common cause.

The senior allied official said their country’s greatest medium- and long-term economic risk is getting engulfed by a US-China contest sparked by tensions that boil over. “Few of us can afford to make a decision between the US and China,” the official said. “So please don’t ask us to do so.”

It isn’t that US allies are naïve about the unfortunate course Chinese President Xi Jinping is setting for his country. It’s just that a great many of them have China as their number one trading partner—including the European Union as a whole, Germany, Japan, South Korea, Saudi Arabia, and the United Arab Emirates. China represented nearly 30 percent of global growth between 2013 and 2018, more than double that of the United States.

Much of the most recent analysis regarding China has circled around two immediate issues: growing signs of China’s economic fragility, after decades of double-digit growth, and increased saber-rattling and threats concerning Taiwan.

The two could be connected.

A growing chorus of analysts argues it could be China’s weaknesses rather than its strengths that pose the greatest dangers. The logic goes that Xi, if his economic difficulties grow, might choose to stoke nationalism by escalating confrontations with the United States, with Taiwan as the most tempting target. The most immediate source of economic concern, aside from new power shortages, has been the unraveling of Chinese property giant Evergrande amid missed bond payments and under the weight of $300 billion in loans.

“If China’s policymakers can successfully pivot their economy to be a more productive and dynamic one, the risk to Washington is real,” writes a new Atlantic Council fellow Michael Schuman. “If, however, it turns out that China is more like Evergrande—a glossy growth story with a rotten core—then Beijing’s ambitions will unravel, much like the property company’s.”

Bonny Lin and David Sacks argue this week in Foreign Affairs that “China’s increasingly aggressive behavior” toward Taiwan “makes a cross-strait emergency more likely. But the risk of a crisis stems less from the possibility of an immediate Chinese invasion than from an accident or a miscalculation that turns deadly—a midair collision between Chinese and Taiwanese jets, for instance.”

This all has the feel of the perilous beginning of an uncertain era that lacks established rules or patterns of behavior. The United States is unaccustomed to such challenges to its role, and China is unpracticed at managing global tensions.

It’s worth remembering that the US-Soviet relationship was probably most dangerous from 1945 to 1962. In those seventeen years after World War II, the two sides navigated a series of crises, culminating in the 1962 Cuban missile crisis, before the relationship evolved into more predictable contours.

That was before they knew they would own the challenge inside the White House. They are now working toward a virtual US-China summit before the year’s end, and the two sides have made progress toward working-level talks on several key issues.

Under the headline “Competition Without Catastrophe,” Sullivan and Campbell wrote, “The starting point for the right US approach must be humility about the capacity of decisions made in Washington to determine the direction of long-term developments in Beijing… [The United States] should seek to achieve not a definitive end state akin to the Cold War’s ultimate conclusion but a steady state of clear-eyed coexistence on terms favorable to US interests and values.”

Whether they succeed will shape the global future.

In this week’s must-read, Bonny Lin and David Sacks sound an important warning about the dangers of accidental war over Taiwan.

“China’s increasingly aggressive behavior makes a cross-strait emergency more likely,” they write. “But the risk of a crisis stems less from the possibility of an immediate Chinese invasion than from an accident or a miscalculation that turns deadly.”

As a result, “Preparing for a full-scale Chinese invasion of Taiwan is no longer a sufficient US strategy. Washington must also prepare for a blunder or a miscue that has the potential to explode into open conflict.” Read more →

#2 Washington Is Getting China Wrong
Michael Schuman | THE ATLANTIC

Amid the debate over whether China’s challenge is more a product of its strength or weakness, incoming Atlantic Council fellow Michael Schuman offers this smart analysis of how China, like the ill-fated Evergrande, may not be as economically successful as it appears.

“Beijing’s political and military strength can continue to build only if its economic resources and technological prowess continue to advance,” Schuman writes. “If China’s policy makers can successfully pivot their economy to be a more productive and dynamic one, the risk to Washington is real. If, however, it turns out that China is more like Evergrande—a glossy growth story with a rotten core—then Beijing’s ambitions will unravel, much like the property company’s.”

Schuman argues the scariest possibility is that, “fearing his country will be weaker in the future than in the present, and needing a new source of legitimacy to replace economic performance, Xi might turn to nationalist causes and become more aggressive, perhaps making a grab for Taiwan.” Read more →

“The electricity crunch has… laid bare one of China’s strategic weaknesses,” Bradsher writes. “It is a voracious, and increasingly hungry, energy hog.”

As its energy shortage ripples “across factories and industries, testing the nation’s status as the world’s capital for reliable manufacturing,” China is scrambling to mine more coal and expand energy production. Read more →

Michael McFaul, former US ambassador to Russia, argues that American public diplomacy is badly in need of a significant reinvention and expansion if liberal democracy is to effectively compete with authoritarianism.

“In today’s ideological competition between illiberal autocracy and liberal democracy, Xi Jinping’s China and Vladimir Putin’s Russia have made major investments in tools for propagating their worldviews and explaining their policies.” McFaul warns. “The United States has not. It’s time to catch up.”

McFaul points to new ideas for achieving this from a new Atlantic Council report: “Upgrading US public diplomacy: A new approach for the age of memes and disinformation.” Read more →

The first sentence in Dion Nissenbaum’s WSJ feature sets up the rest of the rich narrative: “An Afghan interpreter who helped rescue then-Sen. Joe Biden in 2008 when his helicopter made an emergency landing in Afghanistan has escaped from the country.”

As Nissenbaum writes, “The main drivers of the mission to save [Aman] Khalili, his wife, and five children were US military veterans from Arizona who worked with the interpreter on the 2008 operation to rescue the stranded senators”—Biden and then fellow Senators John Kerry and Chuck Hagel.

It’s an uplifting story about human determination but also a sobering one about the impediments to escaping Afghanistan. Offers to help rolled in, including from Ukraine, military-contractor founder Erik Prince, and conservative commentator Glenn Beck, who founded the Nazarene Fund.

After driving 144 hours day and night and making it through checkpoints, the interpreter and his family made it safely overland to Pakistan and then on to Doha. He now hopes to personally thank Biden for his assistance, “if we get the chance.” Read more →

The Czech opposition’s victory could inspire other democratic forces across the region.

Down the ‘Rathole’: How a rapper channels Iran regime change discourse

Both the content of Toomaj Salehi’s hard-hitting rap songs, as well as the debates they have produced, speak to a transformed Iranian media landscape.