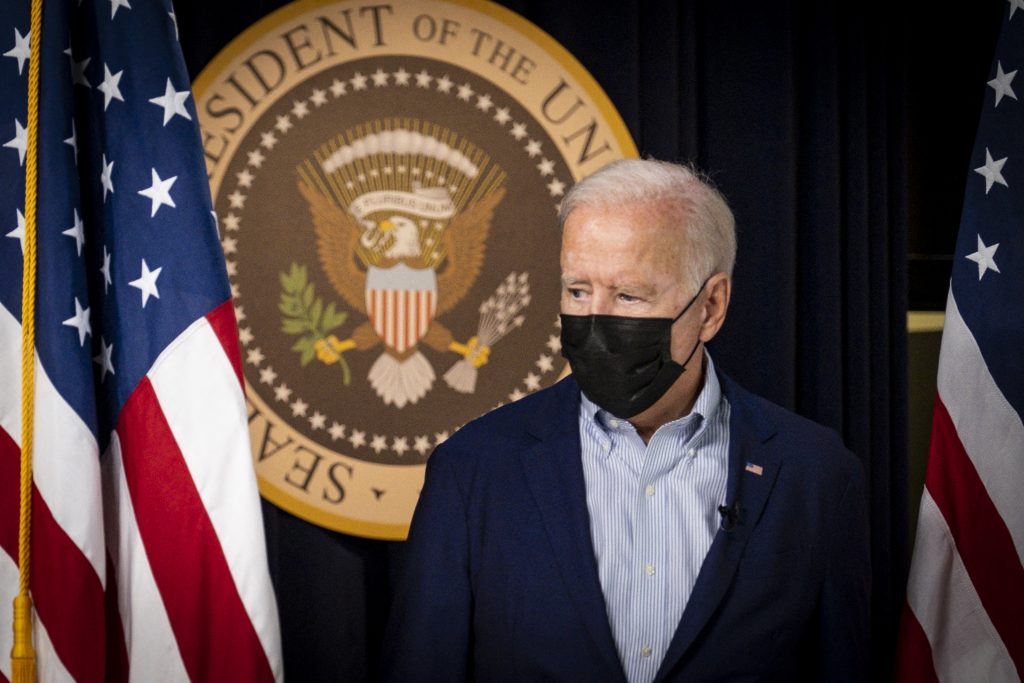 It’s hard to find a silver lining in the darkness of the Afghanistan squall but here is one for President Joe Biden: This crisis happened early enough in his presidency for him to take corrective action, based on a ruthless assessment of mistakes made and lessons learned.

Those actions should focus on three areas: restoring allied confidence in US leadership, laying out a robust counterterrorism strategy based on Afghanistan’s changed reality, and rallying regional actors to shape and constrain Taliban behavior.

None of that will be easy.

Yet it is all urgently necessary with the Biden administration’s historic ambitions and US credibility at stake during a time the president has correctly described as an inflection point in a systemic contest between authoritarianism and democracy.

If the administration takes these three courses of action, Biden can more effectively return to his “Build Back Better” narrative of quelling COVID-19 and focusing on economic stimulus and infrastructure plans that have already fueled US jobs and growth.

Biden’s audacious presidential ambitions need not die in the Hindu Kush, alongside the thirteen American service members and at least 169 others who lost their lives to suicide bombers on Thursday. A US military drone strike on Friday was said to have taken out two ISIS-K planners behind that attack, and evacuations continue against the Tuesday withdrawal deadline.

Yet it isn’t too early to start planning the aftermath of 8/26, the deadliest day for the US military since 2011. Presidents Barack Obama and Donald Trump were able to escape their presidencies without an international crisis of this dimension. President George W. Bush wasn’t as lucky, and he would be the first to tell Biden that Afghanistan will likely define his administration. Biden can still do much to shape that story, however.

Cynical domestic political voices in Washington—and they exist in considerable numbers—argue that Americans will forget Afghanistan quickly. All will be well once Americans are out of harm’s way, according to this argument. Others are already jockeying to leverage this crisis to replace the Biden-Harris ticket in 2024 or, among Republicans, to position themselves as a more decisive and competent alternative.

Cynicism can win some electoral races, but it is never a recipe for greatness. The United States and Biden himself still have greatness within their grasp. It will take a new level of focus and execution on international common causes.

First, Biden must match his “America is back” rhetoric about embracing allies with much deeper and more meaningful consultation on issues that are most significant to US partners.

Though the issues of counterterrorism and Afghanistan may first come to mind, our allies both in Asia and Europe most of all want us to consult more closely with them on the Biden administration’s approach to China, which is of far greater concern to almost all of them. In short, they want to be treated like the strategic partners the Biden administration has told them they are.

“America’s alliances are our greatest asset,” Biden said in his first foreign policy speech this February at the State Department. “And leading with diplomacy means standing shoulder-to-shoulder with our allies and key partners yet again.”

Those allies, however, complain that the outreach hasn’t matched the rhetoric. European ambassadors say their governments weren’t consulted ahead of Biden’s April speech on withdrawal from Afghanistan or regarding its timing and execution, though their citizens and troops were also at risk.

Former Secretary of State Henry Kissinger writes in the Economist this week that of fundamental concern “is how America found itself moved to withdraw in a decision taken without much warning or consultation with allies or the people most directly involved in 20 years of sacrifice.”

Seven months into the Biden administration, US officials still tell their allies that America’s China policy is “under review.” The Biden administration should bring its closest allies into the tent of these discussions, even as they work their way through the US interagency process. While it does so, it should also urgently address lingering trade tensions left over from the Trump administration.

Second, the Biden administration should begin intensive counterterrorism consultations with its closest allies. In an interview with CBS, Secretary of State Tony Blinken rightly argued that terrorist cells have metastasized since the 2001 attacks and are now scattered all over the world.

Thus, the vastly improved US “over-the-horizon” ability to take on terrorists is the new normal, and now will be applied to Afghanistan as well. But that overlooks how the terrorist scattering came about in no small part because Terrorist Inc. lost its safe haven in Afghanistan.

In none of the countries where terrorists now operate do they enjoy a regime as potentially hospitable to them as the Taliban is likely to be. Terrorists still consider 9/11 to have been a success in striking the American infidels, and the Taliban’s taking of Afghanistan near the twentieth anniversary of that attack will likely provide a boost to recruitment and a new home for training and common cause.

There is a reason jihadists around the world reacted to the Taliban’s victory by handing out sweets and setting off fireworks.

Finally, the Biden administration needs to work in particular with regional partners to monitor, shape, and discipline Taliban activity.

International actors have leverage on the Taliban due to its current desire for international recognition, its urgent economic problems, and its need for skilled partners who can help with Afghanistan’s development.

The key here will be whether countries like China and Russia, once they have digested their satisfaction with this American setback, will see a benefit in working with the United States to ensure the Taliban doesn’t create an extremist state with terrorist leanings.

Expect tough conversations over that, as China will want the United States in return to ease up on its charges that Beijing is, in the words of Secretary Blinken, engaged in “genocide” against its Uyghur Muslim minority.

The concept of a “silver lining,” seeking the most positive aspects in the most negative situations, is thought to have been first expressed in a John Milton poem of 1634. The Biden administration needs to seize upon this old idea now and use its benefit of time to correct course with allies and partners over Afghanistan and beyond.

This week’s must-read comes from one of America’s legendary elder statesmen (and the Atlantic Council’s longest-serving board member), former Secretary of State Henry Kissinger, who famously presided over the US exit from Vietnam.

He concedes that the rescue of Americans, allies, and Afghan partners is most urgent: “The more fundamental concern, however, is how America found itself moved to withdraw (from Afghanistan) in a decision taken without much warning or consultation with allies or the people most directly involved in 20 years of sacrifice.”

One of the most serious mistakes, Kissinger argues, was becoming trapped by the belief that either total commitment or total withdrawal were the only options.

“The military objectives have been too absolute and unattainable and the political ones too abstract and elusive,” he writes. “The failure to link them to each other has involved America in conflicts without definable terminal points and caused us internally to dissolve unified purpose in a swamp of domestic controversies.” Read more →

#2 Can the Taliban become a reliable partner to the U.S.? Only time will tell.
David Ignatius | THE WASHINGTON POST

Written before Thursday’s terrorist attacks, David Ignatius’s column is still worth a close read for its smart look at the question of the hour: Can we work with the Taliban constructively?

“As the Biden team struggles to craft its strategy for postwar Afghanistan,” he writes, “the central questions will involve its awkward relationship with the Taliban … Does the United States want to see the Taliban succeed or fail in its efforts to stabilize and rule the country? Under what conditions should Biden recognize a Taliban-led government in Kabul?”

Always a resourceful reporter, Ignatius chronicles US cooperation with the Taliban to combat ISIS-K, the group that took responsibility for this week’s attacks.

“Still,” Ignatius writes, “the United States’ past dealings with the Taliban don’t offer much hope for the future. It has been attempting to negotiate peace with the rebels since 2011.” Instead of negotiating the permanent and comprehensive ceasefire it promised, “the Taliban bribed and assassinated its way to victory.” Read more →

The Economist presents a chilling, in-depth analysis of the global implications of the Taliban’s victory. Even if the most optimistic predictions about the group’s trustworthiness somehow prove accurate, a devastating message has been sent to jihadist movements around the world that brutal persistence and patience will ultimately bring success.

“The Taliban’s return to power,” The Economist writes, “is undoubtedly the most trumpetable moment for jihadists since Islamic State (IS) took advantage of Sunni disaffection to create a ‘caliphate’ in western Iraq and eastern Syria in 2014.” The long-lasting effects of this injection of morale are as yet unclear—but the implications are unsettling. Read more →

Amid the gloom of the Afghan withdrawal, David Frum offers a sliver of optimism, arguing that the evacuations of Afghanistan’s best and brightest will strike a blow to the Taliban by starving the group of the capabilities it will need to run the country. He also believes that the age of Islamist extremism—which once looked as though it would have global appeal—is still in decline, and the Taliban takeover won’t change that.

“Offering refuge in the West to tens of thousands of Afghan allies is a dramatic humanitarian act,” he wrote. “It’s a display of power, too—not only the organizational and economic power involved in moving so many people so fast and so far, but also the cultural and social power of the superior attractiveness of the modern world that so appalls the Taliban.”

Frum continues: “Almost two decades ago President George W. Bush prophesied that someday the ideologies of Islamic terror would join Nazism and communism in ‘the unmarked grave of discarded lies.'”

Frum concedes that prophecy hasn’t yet come to pass, “But the people trying to board the planes in Kabul have rejected the lie, and the urgency in their faces tells their story.” Read more →

“[C]ould success and failure coexist on the same battlefield?” he asks himself. “Can the United States claim to have won the war on terror while simultaneously having lost the wars in Afghanistan and Iraq?”

He then brilliantly explores these core questions.

One of the more profound parts of this must-read comes with his reflection on the opportunity cost of these two wars, both in terms of US political dysfunction and neglecting the rising challenges from China and other state actors.

And fatigue: “Americans’ fatigue—and rival countries’ recognition of it—has limited the United States’ strategic options,” he writes. “As a result, presidents have adopted policies of inaction, and American credibility has eroded,” while adversaries sharply increase their capabilities.