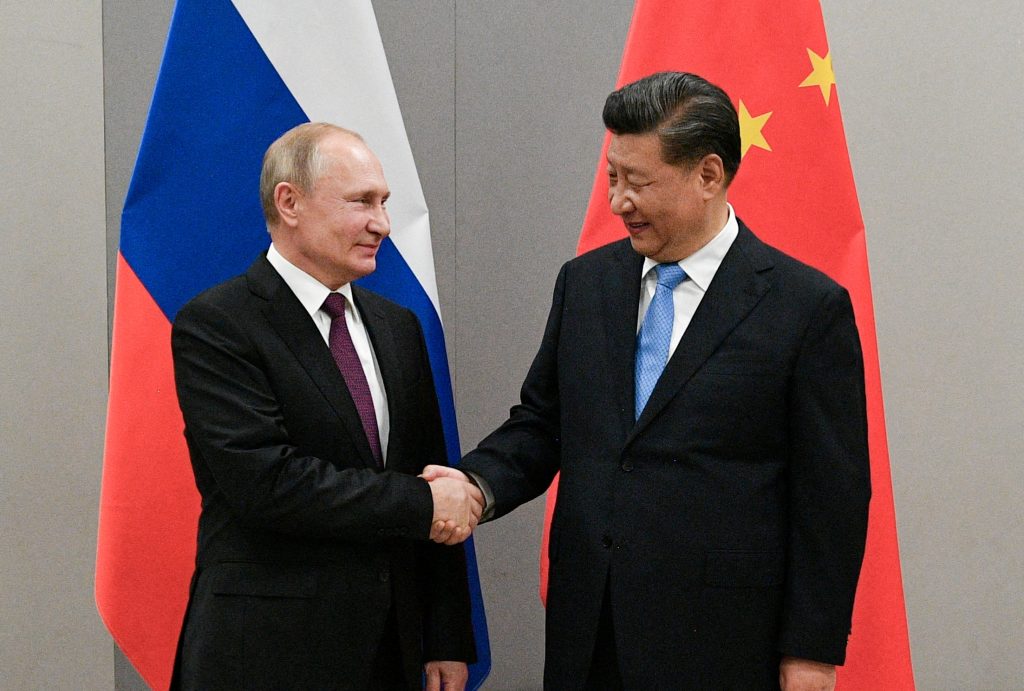 It becomes clearer every day that Chinese President Xi Jinping’s decision to double down on his “no limits” strategic bromance with Russian President Vladimir Putin, just days before the Russian dictator launched his war in Ukraine, marks the most dangerous and short-sighted gamble of his nine years in power.

If Europe’s biggest conflict since World War II produces Putin’s military withdrawal, failure, or political ouster, it has all the ingredients to pose the biggest threat yet to Xi’s leadership, coming as it does in the leadup to his decisive twentieth Chinese Communist Party Congress in November.

Geopolitical oddsmakers still expect a carefully choreographed outcome at the Congress that would anoint Xi for a third term and perhaps even as “leader for life.” That said, a Putin failure of whatever stripe could “create the chemistry necessary for a rethink of Chinese leadership inside the party,” Kevin Rudd, the former Australian prime minister, tells me. Though Xi’s control remains “comprehensive,” Rudd says, it’s not “complete.”

There’s no doubt that Xi must begin to consider the consequences of Putin’s ruin. In perhaps the most significant speech of his long political career, US President Joe Biden in Poland departed from his prepared text to suggest what price Putin should pay for his unjustified, unprovoked, and criminal war on Ukraine’s civilians.

Three days earlier in Brussels, NATO Secretary General Jens Stoltenberg tagged Xi as Putin’s enabler. “Beijing has joined Moscow in questioning the right of independent nations to choose their own path,” he said. “China has provided Russia with political support, including by spreading blatant lies and disinformation.”

What’s at stake in Ukraine’s survival is nothing less than the future of the global order and who will shape it. It’s time for world democracies to translate their reactive response to Putin’s challenge in Ukraine to a proactive embrace of a strategic opportunity. Putin’s failure in Ukraine could reverse the world’s authoritarian momentum, disrupt the Xi-Putin strategic common cause, and expose the hypocrisy that taints Xi’s global ambitions.

The problem for Xi, in this most important of years for his historic legacy, is that his problems are self-inflicted, cumulative, and growing. None on its own would be enough to turn party comrades against him, especially after a series of purges that have removed potential opponents. Taken together, however, they have dramatically changed the mood.

Xi’s inability to anticipate Putin’s military failures and mounting war crimes could increase doubts about the Chinese president’s judgment across a number of other fronts as well.

With all that as context, Xi and Putin on February 4—with the Beijing Winter Olympics opening and more than 150,000 Russian soldiers massing on Ukraine’s border—signed their 5,300-word statement “that the new inter-State relations between Russia and China are superior to political and military alliances of the Cold War era. Friendship between the two States has no limits, there are no ‘forbidden’ areas of cooperation.”

Dissecting that pact in this space, I wrote: “This is big. The two leading authoritarians of our time have declared unprecedented common cause—perhaps even a de facto security alliance—with aspirations of shaping a new world order to replace the one fashioned by the United States and its partners after World War II.”

It is naive to think Putin did not share his invasion plans with Xi ahead of this move, or that Xi didn’t understand that the joint statement served as a green light for Putin’s Ukraine war. Western leaders are mistaken to believe the time is ripe to separate Xi from Putin. Their argument is that reputational, economic, and domestic political considerations inevitably will change Xi’s calculus. Chinese officials looked on in dismay as the United Nations General Assembly voted 141-5 to demand Russia “immediately, completely, and unconditionally withdraw all of its military forces from the territory of Ukraine within its internationally recognized borders.”

However, Xi must weigh that against larger strategic imperatives: his determination to secure his northern border, his desire for continued access to Russian energy (now deeply discounted), and all that China gains through Russia’s actions to disrupt and distract the United States around the world, from the Middle East to the United States’ own elections.

Finally, even a much-weakened Putin is better than no Putin at all for Xi, given how much the Chinese leader has invested in the relationship through more than three dozen meetings since 2014. The potential consequences for Xi of Putin’s ouster are so terrible that he’ll be more likely to support a peace deal at the last possible minute that would leave Putin far short of his maximalist Ukraine goals.

What that won’t change is the setback Putin has delivered to Chinese global interests. “The democracies of the world,” said Biden in Warsaw, “are revitalized with purpose and unity found in months that we’d once taken years to accomplish.”

This week’s top must read is Biden’s speech this weekend in Warsaw, Poland, which may be the most significant address of his long political career. What won headlines was his ad-libbed line on Putin at the end of the speech: “For God’s sake, this man cannot remain in power.”

However, the lasting value of the address came from the broader context he provided for Putin’s war in Ukraine, in a speech with poetic flourishes and a powerful call to action for the world’s democracies.

“In this battle, we need to be clear-eyed,” he said. “This battle will not be won in days or months, either. We need to steel ourselves for the long fight ahead… We must remain unified today and tomorrow and the day after and for the years and decades to come.”

Writing in Foreign Affairs, Michael Beckley provides a must-read essay—informed by history—on how China’s aggressive attempts to build a new world order have helped revitalize US partnerships and provide the Free World a chance to build a renewed global order.

Writes Beckley: “There are only two orders under construction right now—a Chinese-led one and a U.S.-led one—and the contest between the two is rapidly becoming a clash between autocracy and democracy, as both countries define themselves against each other and try to infuse their respective coalitions with ideological purpose.” Read more →

Roger Cohen, one of the finest foreign correspondents of our times, delivers a must-read profile of Putin and his journey from scrappy Leningrad youth to megalomaniacal dictator.

Cohen opens with a more measured, reasonable Putin speaking before the Bundestag in 2001, earning a standing ovation from German lawmakers. Now, he writes, “That power corrupts is well known. An immense distance seems to separate the man who won over the Bundestag in 2001 with a conciliatory speech and the ranting leader berating the ‘national traitors’ seduced by the West who ‘can’t do without foie gras, oysters or the so-called gender freedoms,’ as he put it in his scum-and-traitors speech this month.”

And now, Putin has gone all in. As Norbert Röttigen, one of those applauding German lawmakers in 2001, told Cohen, “I think at this point he either wins or he’s done. Done politically, or done physically.” Read more →

To understand the immense advantage bravery and fighting spirit bring to the Ukrainian military, read this brilliant reflection by Elliot Ackerman on his interview with a former US Marine, now volunteering with the Ukrainians in Kyiv.

“Napoleon, who fought many battles in this part of the world, observed that ‘the moral is to the physical as three is to one.’” Ackerman writes. “I was thinking of this maxim as Jed and I finished our tea. In Ukraine—at least in this first chapter of the war—Napoleon’s words have held true, proving in many ways decisive.”

As for the unfortunate Russian conscripts, the US Marine related a chilling tale. “During a failed night assault on his trench, a group of Russian soldiers got lost in the nearby woods. ‘Eventually, they started calling out,’ he said. ‘I couldn’t help it; I felt bad. They had no idea where to go.’”

“When I asked what happened to them,” Ackerman writes, “he returned a grim look.” Read more →

This important clarion call from the Atlantic Council’s own Gissou Nia and Jomana Qaddour makes a powerful case for how the International Criminal Court and the United States can investigate Russian war crimes and hold Putin and his cronies accountable for their behavior not only in Ukraine but in past wars as well.

“None of this,” they write, “would have seemed at all possible until recently. But now, there is a real opportunity to provide accountability and reparations for victims of Russian abuses. While it can be tempting for lawmakers to focus on the present, Putin’s past and ongoing atrocities in Syria and elsewhere provide critical context to current events. This is the moment to tell autocrats around the world that the world remembers each and every one of their crimes—and that getting away with them is no longer possible.” Read more →

The passing of former Secretary of State Madeleine Albright on Wednesday was a profound loss to the United States and to the world. It was also a loss to the Atlantic Council, where she served as an honorary director and an International Advisory Board member, and where she led task forces on everything from the future of the Middle East to a transatlantic strategy for Afghanistan.

She was also a personal friend, someone who provided me and countless others inspiration as we shared her struggle for a more just, free, and democratic world. I was struck, as we traveled the Middle East together with her task force co-chair Steve Hadley, by how women of all nationalities flocked to her side as a role model for their own aspirations.

It struck me that the best way to honor her this weekend would be to spotlight her final op-ed in the New York Times, published exactly a month before her passing. She reminisced on her first meeting with Putin, who she described as “so cold as to almost be reptilian,” and accurately predicted the consequences Putin would face if he invaded Ukraine. Read more →

By obscuring its true goal from troops on the ground, Russia’s leadership made the military’s difficulties exponentially worse.

Why NATO should establish a humanitarian no-conflict zone in Ukraine

The Alliance faces both moral and strategic imperatives to respond to Ukrainian President Volodymyr Zelenskyy’s call for help.

Image: Russian President Vladimir Putin shakes hands with Chinese President Xi Jinping during their meeting on the sidelines of a BRICS summit, in Brasilia, Brazil, November 13, 2019. (Photo by Sputnik/Ramil Sitdikov/Kremlin via REUTERS)