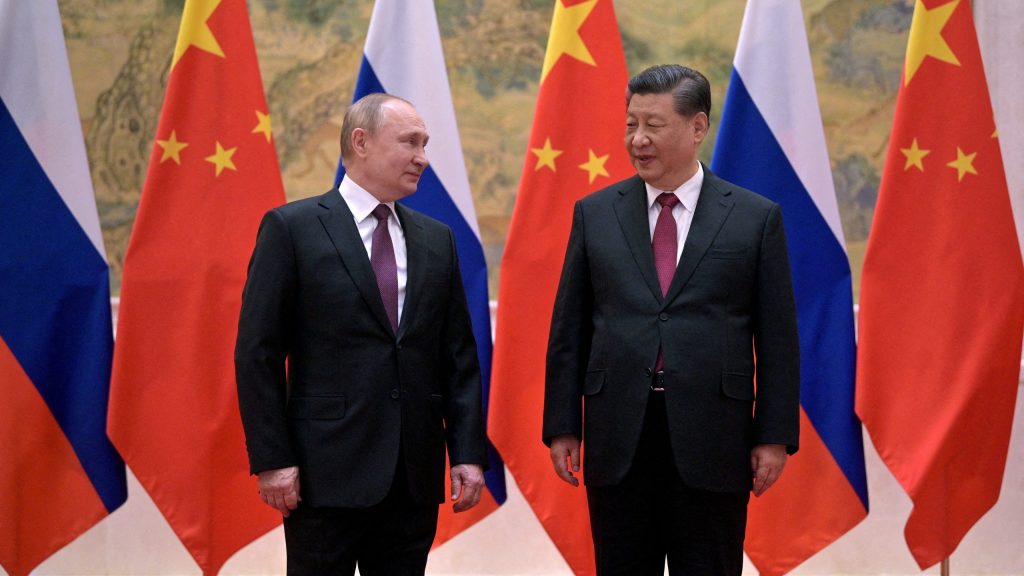 The two leading authoritarians of our time have declared unprecedented common cause—perhaps even a de facto security alliance—with aspirations of shaping a new world order to replace the one fashioned by the United States and its partners after World War II.

Chinese President Xi Jinping and Russian President Vladimir Putin wanted to make sure the world didn’t miss the importance of their thirty-eighth personal meeting in Beijing on Friday, just hours before the opening of the Winter Olympics and with more than one hundred thousand Russian troops threatening Ukrainian sovereignty.

So they released the entirety of their audacious, 5,300-word joint statement in English this weekend, declaring that “a trend has emerged towards redistribution of power in the world”—namely toward them, and away from the United States and its democratic partners and allies.

There’s a lot in the statement worth reading and digesting, but here’s my rough executive summary: Russia and China are throwing in their lot with each other in an unprecedented manner in each other’s regions and around the world.  For the first time, Beijing has joined Moscow in opposing NATO enlargement; Russia returned the favor by opposing the new AUKUS defense pact binding Australia, the United Kingdom, and the United States, as well as endorsing its One China Policy and growing role in the Arctic.

Russia and China aren’t calling their partnership an alliance of the NATO variety. But they aren’t shy about its ambitions.

Xi and Putin, the statement says, “reaffirm that the new inter-State relations between Russia and China are superior to political and military alliance of the Cold War era. Friendship between the two States has no limits, there are no ‘forbidden’ areas of cooperation [emphasis added], strengthening of bilateral strategic cooperation is neither aimed against third countries nor affected by the changing international environment and circumstantial changes in third countries.”

A Biden administration official I spoke with sees a silver lining in the fact that the statement doesn’t mention Ukraine by name, perhaps showing China’s discomfort with the prospect of invasion. But at the same time, Xi has said nothing to dissuade Putin’s escalation.

In the statement, the two sides are redefining the very meaning of democracy to embrace their repressive systems that censor media, prohibit dissent, lock up political opponents, and support like-minded authoritarian systems.

Ludicrous as their definition of democracy might sound, it’s further evidence that China and Russia are trying to wrest the high moral ground from electoral democracies through Orwellian gobbledygook.

“The sides note,” reads the statement, “that Russia and China as world powers with rich cultural and historical heritage have long-standing traditions of democracy, which rely on thousand-years of experience of development, broad popular support and consideration of the needs and interests of citizens.”

Further, “It is only up to the people of the country to decide whether their State is a democratic one.” Elsewhere, however, the statement warns “that the advocacy of democracy and human rights must not be used to put pressure on other countries.”

The broad areas that the agreement covers are head-spinning.

The sides agreed to more closely link their economies through cooperation between China’s Belt and Road Initiative and Putin’s Eurasian Economic Union. They will work together to develop the Arctic. They’ll deepen coordination in multilateral institutions and to battle climate change.

Back in June 2019, I wrote in this space: “It’s time to start worrying more about what could become the most profound geopolitical shift of the post-Cold War years. China’s Xi Jinping and Russia’s Vladimir Putin are deepening their two countries’ strategic alignment even as long-time democratic allies across the Atlantic grow more distant.”

Perhaps the biggest mistake Western strategists have made since then has been to separate the Chinese and Russian challenges to the post-Cold War international order as distinct and only loosely related.  The Biden administration even hoped to “park” the Russia issue as it dealt with the more pressing and long-term China challenge.

Yet for all the two countries’ historic animosities and considerable remaining differences, perhaps never in their history have they been closer. And never since World War II have the leading authoritarians of their time been so strategically aligned or personally close—at a time when both are deeply contemplating their legacies.

As Putin considers his own options regarding Ukraine, his relationship with China could help him manage any potential new sanctions, particularly through deepened energy agreements and financial arrangements.

On Friday, China and Russia announced new oil and gas deals valued at an estimated $117.5 billion. Rosneft, Russia’s largest oil producer, announced a new agreement to supply 100 million tons of crude through Kazakhstan to the Chinese state company China National Petroleum Corporation over the next ten years—while the Russian energy giant Gazprom pledged to ship 10 billion cubic meters of gas per year to China through a new pipeline.

A European senior official I spoke with, who tracks intelligence on Ukraine, considers the time of maximum danger for Ukraine to be after February 20, the last day of the Olympics, which coincides with the end of the massive “Allied Resolve” Russian military exercises in Belarus (which could mask preparations for invasion). It is also when the Ukrainian ground and rivers remain sufficiently frozen to allow for heavy military equipment to move most effectively.

Whatever Putin chooses regarding Ukraine, however, this week’s joint statement underscores a tectonic shift in global relations that will require far more creative, collaborative, and long-term thinking by the United States and its partners.

The growing closeness between Russia and China has increased both countries’ advantage at a time when their leaders believe they have the momentum—and in a world where democracies have weakened, the United States is politically divided, and new technologies are empowering authoritarian leaders’ ability to surveil and control their societies.

It’s tempting to poke holes in the joint statement, noting its inconsistencies and its hypocrisy. What unites Russia and China remains mostly their opposition to the United States: They’ve cynically appropriated the concepts that define US foreign policy—democracy, human rights, and economic development—though their actions are ridiculously inconsistent with their rhetoric.

Without more aggressive and consistent pushback among democracies, expect more Chinese-Russian push forward. It would be a profound mistake to see the Ukraine crisis in isolation at a time when Xi and Putin have provided its disturbing context.

Frederick Kempe is president and chief executive officer of the Atlantic Council. You can follow him on Twitter: @FredKempe.

This 5,300-word joint statement is worth reading in its entirety—if only because of the significance that China and Russia have given it at the opening of the Winter Olympics in Beijing, and with more than one hundred thousand Russian troops amassed along Ukraine’s borders.

“Today, the world is going through momentous changes, and humanity is entering a new era of rapid development and profound transformation,” the statement begins, clearly putting China and Russia at the vanguard of these changes. Another revealing phrase: “a trend has emerged toward redistribution of power in the world.” Read more →

This week’s must-read on the “Putin Doctrine” comes from Angela Stent, one of the most insightful scholars anywhere on Russia.

“The core element of this doctrine is getting the West to treat Russia as if it were the Soviet Union, a power to be respected and feared, with special rights in its neighborhood and a voice in every serious international matter,” she writes.

“The doctrine holds that only a few states should have this kind of authority, along with complete sovereignty, and that others must bow to their wishes. It entails defending incumbent authoritarian regimes and undermining democracies. And the doctrine is tied together by Putin’s overarching aim: reversing the consequences of the Soviet collapse, splitting the transatlantic alliance, and renegotiating the geographic settlement that ended the Cold War.”

Stent adds: “[E]ven if Europe avoids war, there is no going back to the situation as it was before Russia began massing its troops in March 2021. The ultimate result of this crisis could be the third reorganization of Euro-Atlantic security since the late 1940s.” Read more →

As Putin continues to mass his troops near Ukraine, one of his main deterrents for the next two weeks will be the Olympics—not least because Xi, Putin’s most valuable ally, has tied his reputation to the success of the games, writes Lily Kuo.

“Chinese organizers of the Games, ‘taking Xi Jinping Thought as their core,’ according to official statements, are determined to present an image to the world of a technologically advanced and responsible nation,” Kuo writes. “And credit for everything will go to Xi.”

For Xi, the Washington Post reporter writes, “the Olympics are a chance to cast China as a global leader to be respected and emulated, and an opportunity to claw back some of the goodwill lost over Beijing’s handling of the coronavirus pandemic and its confrontational ‘Wolf Warrior’ diplomacy.” Read more →

#4 The Reason Putin Would Risk War
Anne Applebaum | THE ATLANTIC

Writing in the Atlantic, Anne Applebaum delivers this smart analysis of why Putin might take the colossal risk of invading Ukraine.

Putin and his inner circle, Applebaum writes, have been profoundly shaped by their path to power, which has left Putin sitting atop a pyramid of corruption. Putin knows well that “talk of democracy and political change is dangerous. To keep them from spreading, Russia’s rulers must maintain careful control over the life of the nation. Markets cannot be genuinely open; elections cannot be unpredictable; dissent must be carefully ‘managed’ through legal pressure, public propaganda, and, if necessary, targeted violence.”

And so, Applebaum argues, Putin—deeply and uncomfortably wary of his own illegitimacy—masses his troops on the Ukrainian border because “he wants to destabilize Ukraine, frighten Ukraine. He wants Ukrainian democracy to fail. He wants the Ukrainian economy to collapse. He wants foreign investors to flee. He wants his neighbors—in Belarus, Kazakhstan, even Poland and Hungary—to doubt whether democracy will ever be viable, in the longer term, in their countries too. Farther abroad, he wants to put so much strain on Western and democratic institutions, especially the European Union and NATO, that they break up. He wants to keep dictators in power wherever he can, in Syria, Venezuela, and Iran. He wants to undermine America, to shrink American influence, to remove the power of the democracy rhetoric that so many people in his part of the world still associate with America. He wants America itself to fail.” Read more →

Yet, as Yaroslav Trofimov reports brilliantly from the ground, Putin’s own oppression and misgovernment of the eastern Ukrainian territories he has occupied has turned even pro-Russian Ukrainians against him.

Since the invasion, Trofimov writes, “the two areas—now nominally independent ‘people’s republics’ inside the larger regions of Luhansk and Donetsk—have turned into impoverished, depopulated enclaves that increasingly rely on Russian subsidies to survive. As much as half the prewar population of 3.8 million has left, for the rest of Ukraine, more prosperous Russia or Europe. Those who remain are disproportionately retirees, members of the security services and people simply too poor to move. Current economic output has shrunk to roughly 30% of the level before the Russian invasion, economists estimate.”

It is both an indictment of Putin’s misrule and a grim vision of what will befall any further parts of Ukraine that Putin subjugates. Read more →

Moscow knows that information is vital in a crisis—and that controlling or entirely disrupting its flow can provide important strategic advantages.

The Council’s Digital Forensic Research Lab tracks the latest Russian military movements and other developments in the Kremlin’s hybrid war against Ukraine.