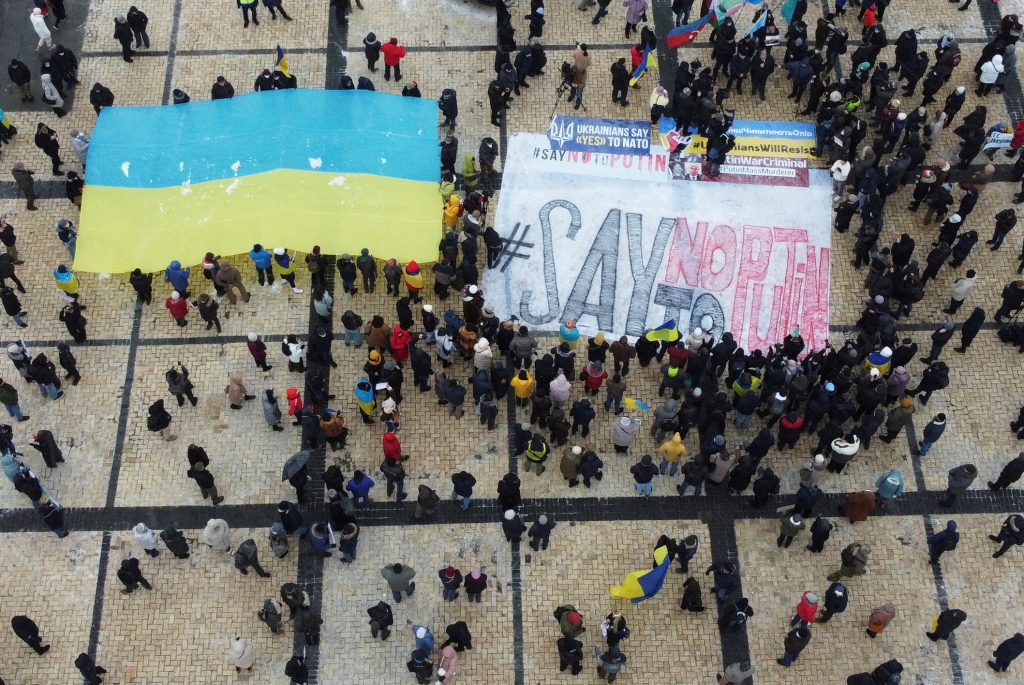 Europe has faced such ugly moments too often before, where matters of life and death—and of war and peace—depended on the balance of power and test of wills between despots and more benevolent forces.

The Cold War’s peaceful end thirty years ago was meant to alter that bloody history and usher in a period that then US President George H.W. Bush in 1989 hoped would bring a “Europe whole and free,” where Russia would find its rightful and peaceful place.

“For forty years, the seeds of democracy in Eastern Europe lay dormant, buried under the frozen tundra of the Cold War,” said President Bush on May 31, 1989, in Mainz, Germany, six months before the Berlin Wall’s fall and more than two years ahead of Soviet dissolution. “And decade after decade, time after time, the flowering human spirit withered from the chill of conflict and oppression… The world has waited long enough. The time is right. Let Europe be whole and free.”

It is with that as context that US President Joe Biden this week confronts a moment of truth for the dying embers of that aspiration and the signature foreign-policy initiative of his presidency. Biden is rallying allies for the systemic competition between democracy and Chinese and Russian autocracy that he has said will define the twenty-first century.

That collides with Russian President Vladimir Putin’s signature ambition of reversing the breakup of the Soviet Union and the enlargement of NATO to his borders, the former of which he famously called “the greatest geopolitical tragedy of the [twentieth] century.” As he turns seventy this year, he seems more determined than ever to cement his legacy, as have Russian czars and leaders before him, through territorial expansion or the control of neighbors.

This week’s talks begin with Monday’s bilateral US-Russian meeting in Geneva, starting with an initial conversation Sunday evening, move on to the Russian-NATO Council in Brussels on Wednesday, and then end on Thursday in Vienna at the Organization for Security and Cooperation in Europe.

What has prompted all these emergency meetings are Russian security demands delivered in mid-December in the form of two draft treaties. Their provisions would prohibit Ukraine from ever joining NATO and require the Alliance to withdraw forces stationed in member countries in Central and Eastern Europe and stop all military exercises in those countries. That was followed a few days later by brash Putin brinksmanship in the form of an ultimatum—backed by some one hundred thousand troops near Ukraine’s borders—that he would take “military-technical” action if not satisfied.

Thus far, the United States and its allies have answered his escalation through the carrot of reciprocal talks on some aspects of the treaties—including allowable missile systems and military maneuvers—and through the stick of punishing, new financial, military, and technology sanctions should Russia invade Ukraine.

US officials told the New York Times that those plans include “cutting off Russia’s largest financial institutions from global transactions, imposing an embargo on American-made or American-designed technology needed for defense-related and consumer industries, and arming insurgents in Ukraine who would conduct what would amount to a guerrilla war against a Russian military occupation, if it comes to that.”

By this week’s end, the United States and its allies likely will know whether Putin is willing to negotiate or whether he’s determined to escalate.

The fluidity of the situation was underscored by this past week’s swift, Russian-led military intervention in Kazakhstan, at the request of Kazakh President Kassym-Jomart Tokayev, ostensibly to quell widespread public protests against a fuel-price increase on January 2.

It would be a mistake to separate Putin’s actions in Kazakhstan from his ambitions in Ukraine. By his calculus, they are inextricably linked.

When the dust settles, Kazakhstan is likely to land deeper in Moscow’s expanding sphere of influence than at any time since it broke from the Soviet Union in 1991—complete with its energy and mineral riches, which include 40 percent of the world’s uranium reserves.

Although the situation is still unfolding and reliable information is hard to come by, what’s beyond dispute is that the timing and swift execution of Russia’s intervention underscore Putin’s determination to see and seize strategic opportunities in the former Soviet space. It is the fourth time in just two years that Moscow has intervened in neighboring states that had been tilting toward the West—following interventions in Armenia, Belarus, and Ukraine.

Rumors are rife in Kazakhstan regarding Russia’s role in this past week’s events, ranging from the possibility that it was a Russian-organized coup from the beginning to the certainty that the always-opportunistic Putin simply seized the moment.

What’s clear is that with his country in turmoil and his leadership at risk, Tokayev turned to Putin to ensure his political survival. That is likely to bring lasting change to a country—and perhaps to other parts of Central Asia—that had benefited from balancing relations with Moscow, Beijing, and Washington.

With Moscow’s support, Tokayev issued shoot-to-kill orders against protesters and ousted Nursultan Nazarbayev, 81, his erstwhile benefactor, and the country’s first president, as head of Kazakhstan’s powerful security council. He also ousted and arrested Karim Masimov, his intelligence chief, on charges of treason.

Russian troops are now on the ground protecting the country’s most crucial airports and military installations, alongside other soldiers from the Collective Security Treaty Organization (CSTO), made up of six nations from the former Soviet Union, in its first such military intervention since its 1992 founding.

As US Secretary of State Tony Blinken said this week, “One lesson of recent history is that once Russians are in your house, it’s sometimes very difficult to get them to leave.” If there is a message from Kazakhstan to US officials negotiating this week with the Russians, it is this: Whatever you hope to negotiate, recognize that Putin is playing for keeps, believes he has the initiative, is willing to take risks, is prepared to send in troops, and sees the Biden administration—particularly following the Afghanistan debacle—and its partners as weak, divided, and indecisive.

The least-likely scenarios are those of Putin backing off from his demands on NATO or executing a full-scale invasion of Ukraine. Watch instead for something murkier and craftier that would be designed to divide allies—the taking of additional swatches of Ukrainian territory, the annexation of Luhansk of Donbas provinces, where Russian separatists dominate, or the stirring up of internal Ukrainian dramas with a hidden hand.

The question is whether the United States and its allies can avoid both appeasement and war. The future of Europe is again in the balance.

The recent passing of Fred Hiatt, the legendary editorial page editor of the Washington Post, was a blow to democracy advocates around the world.

So it was heartening to see the Post’s lead editorial on Sunday rightly warning that history could repeat itself in Europe if the United States and its allies don’t respond properly to Putin’s aggressions. Hiatt would have been proud of the piece, comparing the gravity of the moment to the specter of Munich in 1938, when Britain and France “traded a piece of Czechoslovakia to Adolf Hitler’s Germany in return for his false pledge not to make war.”

“What the United States cannot do is allow Mr. Putin to win concessions at the point of a gun,” the Post concludes. “In the — all too likely — event that he is not bargaining in good faith, and does invade Ukraine, President Biden will have to help that country defend itself, rally NATO and ensure that Russia pays a heavy price.” Read more →

For more on the history of Russian-Kazakh relations, look no further than this excellent explainer from Yaroslav Trofimov.

Recent history provides two contrasting paths for Kazakhstan to follow: Belarus, where President Alyaksandr Lukashenka’s brutal crackdown has successfully kept him in power for now, and Ukraine, where then President Viktor Yanukovych couldn’t quell the 2014 revolution and fled to Russia, leading to Putin taking over Crimea and invading the Donbas region. “The question now is whether Tokayev will have enough political will to take Lukashenko’s path,” Russia expert Andrey Kortunov tells Trofimov. Read more →

The Economist examines how Putin’s menacing build-up across the Ukrainian border could push NATO closer together, a risk the magazine argues the Russian dictator could be more than willing to take.

“The irony,” the Economist writes, “is that Russia’s efforts to halt NATO’s eastward expansion may end up achieving precisely the opposite.” But for Putin, “the gamble may be worth it. Better to start a war now, despite the attendant costs, than risk a Ukraine bristling with foreign troops in a decade. “

The article ends with a sobering reflection by Munich Security Conference Chairman Wolfgang Ischinger, who in 1993 asked a top official in Moscow how Russia was going to calm the fears of former Soviet bloc countries such as Poland and Ukraine.

“What’s wrong with our neighbors living in fear of us?” replied the official. “Unfortunately,” says Ischinger, “very little, if anything, has changed.” Read more →

“Judging from the West’s awkward, anguished response so far,” Shevtsova warns, Putin “might be close to getting what he wants.” And Ukraine could only be the beginning. Writes Shevtsova: “Today, Ukraine is the jewel to fight for. But it won’t end there: Belarus, whose embattled leader relies on Russia’s support, could be the next prize in the geopolitical rivalry — or perhaps it will be Kazakhstan, where popular anger at the corrupt, Russian-backed regime has erupted. The drama is just beginning.”

The result, she argues, is a “deadlock,” as Russia and the West play a seemingly endless game of “who blinks first.” Read more →

#5 In Kazakhstan’s Street Battles, Signs of Elites Fighting Each Other
Ivan Nechepurenko and Andrew Higgins | THE NEW YORK TIMES

This week’s must-read is this superbly reported explainer of the riots in Kazakhstan from Ivan Nechepurenko and Andrew Higgins on how a power struggle within the Kazakh leadership may well have spilled into the streets and fueled the unrest sweeping the country.

“The [fuel-price] crisis,” they write, “coincided with a power struggle within the government, fueling talk that the people fighting in the streets were proxies for feuding factions of the political elite.”

Still, they note that “discontent, even if exploited by political elites, is very real.” Now that Tokayev has invited Russian troops into the country, the situation has only escalated further. What happens in Kazakhstan will leave ripples throughout the region—and perhaps beyond. Read more →

After the insurrection: How domestic extremists adapted and evolved after the January 6 US Capitol attack

This report by the Digital Forensic Research Lab (DFRLab) provides an overview and analysis of the shifts observed in domestic extremist movements since the 2021 Capitol attack.

An entire generation of Venezuelans have grown up in a failed state, which is why they’ll be crucial to the future of the country’s democracy.