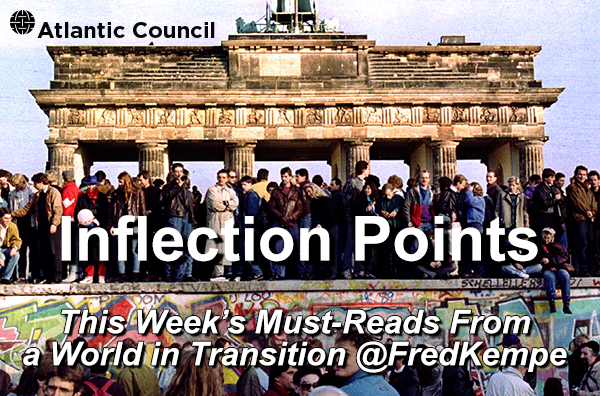 The most significant hopes and gains unlocked by the Berlin Wall’s fall, which was 30 years ago Saturday, are all at risk.

They included a historic expansion of democracies and open markets, a wave of globalization that created the greatest prosperity and largest global middle class the world has ever seen, and the enlargement the European Union, to 28 from 12 members, and NATO, to 29 from 16 – deepening ties among the world’s leading democracies.

That all brought with it the hope of what then-President George H.W. Bush called in 1989 “A Europe Whole and Free,” in which Russia could find its proper and peaceful place. Bush went even further in September 1990, after the UN Security Council had blessed the U.S.-led coalition’s war to free Kuwait from Iraqi invasion, envisioning a New World Order, “an era in which the nations of the world, East and West, North and South, can prosper and live in harmony.”

The idea had been hatched a month earlier by President Bush and General Brent Scowcroft, his national security adviser, while fishing near the president’s vacation home at Kennebunkport, Maine. They came home with three bluefish and an audacious vision that the Cold War’s end and the Persian Gulf Crisis presented a unique chance to build a global system against aggression “out of the collapse of the US-Soviet antagonisms,” in the words of General Scowcroft.

Reflecting on those heady days, Scowcroft recently told me that he felt everything he had worked for in his life was now at risk. If U.S. and European leaders don’t recover the common purpose they shared at that time – and there is yet little sign they will – this weekend’s Berlin Wall anniversary is more a moment for concern than celebration.

“Look at what is happening in the world,” French President Emmanuel Macron said in a freshly published interview in the Economist. “Things that were unthinkable five years ago. To be wearing ourselves out over Brexit, to have Europe finding it so difficult to move forward, to have an American ally turning its back on us so quickly on strategic issues; nobody would have believed this possible.”

This weekend’s 30th anniversary of the Berlin Wall’s fall provides a good moment to reflect on four reasons that event – one of freedom’s greatest historic triumphs – has failed to deliver on its full potential. Understanding that, might unlock a better path forward.

Another thirtieth anniversary this year, the crushing of the Tiananmen Square protests in June 1989, might have had even more lasting consequences.

The regime’s attack on the pro-democracy movement, at a time when the Communist Party could have chosen greater liberalization over repression, ensured that the most important rising power of this century would be increasingly authoritarian in nature.

The lesson Beijing took from the Cold War’s end was that the Soviet Union had failed because it had liberalized its economy too little and its politics too much – a fatal combination. Economic liberalization and a growing Chinese middle class failed to bring with it the Western-style democratic freedoms that some thought would follow.

That doesn’t mean a New World Order can’t still be built with Beijing, but it will take considerable vision and patience to knit the two most important countries of our times together simultaneously, as strategic competitors and collaborators.

There’s a lot of finger pointing still about “who lost Russia” after the Cold War, whether it was Westerners who didn’t offer enough of an embrace or Russians who missed the opportunity.

Wherever you stand in that debate, the U.S. and its European allies failed to appreciate the potential or staying power of Putin, who has made it his life’s purpose to redress what he considered the biggest disaster of the 20th century, Soviet collapse.

At the same time, the enlargement of the European Union and NATO left behind a “gray zone” of 14 countries like Ukraine that were no longer in the Soviet bloc or Warsaw Pact but hadn’t been integrated into Western institutions.

French leader Macron has argued that it would be a huge mistake not to work to find more common ground with Russia. The difficulty is how to do so without selling out the democratic, sovereign hopes of Russia’s neighbors.

Bill Emmott argues in Project Syndicate this week that the European Union’s biggest problem “is not Euroskepticism but indifference.”

He’s partially right: some 72% of French respondents in an opinion poll based on interviews with over 12,000 respondents across the 28 EU countries don’t think they would miss the EU as well as 67% of Italians and 60% of Germans.

That said, the EU also suffers from not having addressed design flaws that hobble it even as it has grown to its current size of 28 member states with 513 million citizens and a GDP of $18.756 trillion.

They include a monetary union without a fiscal union, immigration policies that allowed free movement inside the so-called Schengen Zone but too-porous external borders, and a failure to envision a world where the U.S. is losing interest, Russia remains a problem, and China is remaking global politics and economics.

Europe is “on the edge of a precipice,” Macron told the Economist. “If we don’t wake up … there’s a considerable risk that in the long run we will disappear geopolitically, or at least we will no longer be in control of our destiny. I believe that very deeply,” he stated.

4. The lack of US vision and strategy

U.S. and European leaders failed after 1919 to prevent the rise of European fascism, and then the Holocaust and World War II. The US got it more right than wrong in 1945 after World War II, creating the institutions and principles that paved the way for one of the world’s most sustained periods of relative peace and prosperity.

In his 1989 “A Europe Whole and Free”, President H.W. Bush underscored how “too many in the West, Americans and Europeans alike, seem[ed] to have forgotten the lessons of our common heritage and how the world we know came to be. And that should not be, and that cannot be.”

This week’s top reads below include the Economist’s Macron interview and the Wall Street Journal’s must-read weekend package on the Berlin Wall’s anniversary.

Emmanuel Macron on Europe’s fragile place in a hostile world

French President Emmanuel Macron has triggered another firestorm of controversy for saying out loud matters about Europe that most of his fellow leaders only speak of privately – or believe he has dramatically overdrawn.

On the 30th anniversary of the Berlin Wall’s fall, his interview with the Economist serves as a disturbing wake-up call for a Europe that urgently needs to regain more sense of purpose. With reference to the US withdrawal of troops from Syria, the lack of allied coordination, and NATO member Turkey’s actions against the Kurds, he says we’re experiencing “the brain-death of NATO.”

The Economist adds, “When Mr. Trump tells the French president that ‘It’s your neighbourhood, not mine,’ says Mr. Macron, what he is really saying is, ‘Wake up!’  With America turning its back, China rising, and authoritarian leaders on the EU’s doorstep, the result is ‘the exceptional fragility of Europe.’” Read More →

Those of us who know Fiona Hill, former Trump administration official and one of the smartest thinkers anywhere on Russia, have always known about her mixture of integrity and intelligence.

One can only hope that her refreshingly clear testimony before the House Intelligence Committee yesterday will lay to rest what she called the “rabbit hole” of allegations that Ukraine in any way acted to influence US elections in 2016.

She warns that if we distract ourselves from the real culprit. “it doesn’t mean that other people haven’t also been trying to do things, but the Russians were who attacked us in 2016, and they’re now writing the script for others to do the same. And if we don’t get our act together, they will continue to make fools of us internationally.”

The Politico piece is a good, short account, but the full, rich deposition is must-reading.

It’s hard to overestimate the stakes of Saudi economic and social reform, given the kingdom’s crucial role at the epicenter of global Islam, Middle East stability and world energy markets.

There’s no better observer of this drama than Karen Elliott House, my boss for some years at the Wall Street Journal, who reports from a three-week visit to the country. She richly captures the tension in a country whose people are being wowed by the headlong rush of reform even as some “undoubtedly remain frightened” by the violent death of critic Jamal Khashoggi, the arrests of dissenters and the stripping in 2017 of prominent princes’ wealth and right to travel.

“The regime no longer worries about the erosion of the kingdom’s distinctive culture,” she writes. “Its view is that in a world of ubiquitous social media all cultures are destined to blend and it is no longer feasible, let alone desirable, for Saudi Arabia to shut itself off from inexorable global trends.” Read More →

The U.S.-China trade war is cooling off. But the tech war is heating up.

The National Security Commission on Artificial Intelligence dropped its interim report this week. A key conclusion: the U.S. is not translating broad national AI strengths and AI strategy statements into specific national security advantages. That could have generational consequences in our new era of great power competition.

In his column this week, the Washington Post’s David Ignatius looks at the heading up tech war with China and the report’s effort, in the words of Robert O. Work, the commissions co-chairman, “between decoupling and entanglement. CSPAN captured all the sessions of the conference at which the report was released, including Henry Kissinger’s discussion of the impact of AI on humanity.

This powerful report warns: “The magnitude of technological change at a moment of strategic risk demands that our government and society find common purpose and face these challenges with the same imagination, decisive action, and national will summoned at other critical junctures in our history.” Read More →

The Ordinary People Who Brought Down the Berlin Wall

If you want to read only one publication this weekend dealing with the Berlin Wall fall on its thirtieth anniversary, then pick up the weekend Wall Street Journal and savor the several pieces in the Review section. This is journalism at its best.

It’s particularly worth reading author Mary Elise Sarotte’s account of “the accidental opening” of the Berlin Wall, a reminder that great historical moments are often shaped through a mixture of well-planned strategies and unintended moments. Read More →

A walk through Berlin: Thirty years after the Fall

John Dunton-Downer provides a glimpse of Berlin as it celebrates its recovered unity three decades after the fall of the Berlin Wall.

Pressures from a new global economy and rising rates of migration have collided with the deeply rooted past of a divided Germany to make political predictability a thing of the past. Thirty years after the fall of the Berlin Wall, Germany is still grappling with a division— the Wall in the minds of the people, rather than an actual physical barrier of steel and concrete.

What the US learned from the fall of the Wall