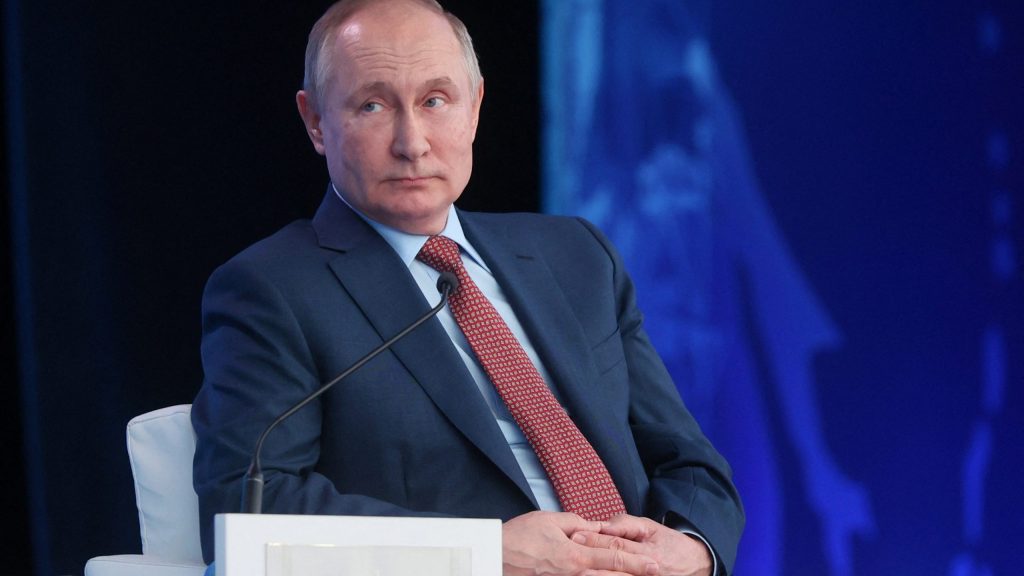 Brace yourself for 2022, a year of living dangerously.

Many of the world’s most profound gains of the post-World War II era will be tested. The security of Europe and Asia, the resilience of democratic governance, the advance of open markets, the sanctity of individual rights, and the certainty of human progress all are in the balance.

Never in the thirty years since the Cold War’s end has a US president entered a new year confronting such an explosive brew of geopolitical and domestic political uncertainty. They are intertwined like a Gordian knot that only bold action can untangle.

The convergence of these external and internal perils, amid deep US political divisiveness and international diffidence, raises the difficulty level for any effective response.

Then layer onto all that the most disturbing rise of inflation in three decades and the persistent torment of COVID-19. Add to that the certainty that all these issues will drive an even greater wedge between rich and poor countries and peoples. Increased global volatility seems inevitable.

All that said, these are the three external factors that should concern us most immediately in 2022: A revanchist Russia is bent on keeping Ukraine within its grasp; China, similarly, is escalating its threats to Taiwan’s independence (don’t fool yourself that Ukrainian and Taiwanese freedoms can be separated); and Iran is so rapidly moving toward nuclear-weapons breakout capability that Israel may be forced to respond.

These dangers are escalating at a time when Chinese, Russian, and Iranian leaders alike—having witnessed the Biden administration’s withdrawal from Afghanistan and its understandable focus on domestic issues—may see 2022 as the best moment yet to advance their geopolitical ambitions.

The optimists among us can take some comfort in the fact that there is a possible path through this briar patch. Advances in technology, health care, and wider human access to knowledge may very well usher in a new epoch of global progress.

There’s also more than enough evidence that democracies, particularly the United States, have sufficient resilience to rebound and regroup.

History also has shown that the most authoritarian forms of government prove ultimately to be the most fragile.

China’s remarkable rise as the world’s first capitalist-communist experiment is running up against a series of setbacks, mostly self-inflicted.

President Xi Jinping is doubling down on domestic repression and reinforcing Communist Party control over China’s most successful companies, particularly in the technology space. In so doing, he is choking them off from international financial markets—and he may be killing the panda that laid China’s economic miracle.

Vladimir Putin’s Russia seems to be a country on the march, pumped up by spiking energy prices and geopolitical muscle-flexing from Syria to the Donbas. However, the weight of existing and new economic sanctions, demographic challenges, and an economy entirely reliant on energy will hamstring Putin’s aspirations to undo the humiliations of his lifetime.

In a documentary that aired on Russian television last Sunday, Putin said the fall of the Soviet Union three decades ago remained a tragedy for most of his fellow citizens. He talked for the first time publicly about how he had to work driving a taxi during that period to make ends meet.

Regarding Iran, how much longer can the regime endure such rampant corruption? The republic has produced so few goods for its people while engaging in countless, expensive adventures abroad—in Iraq, Yemen, Syria, Lebanon, and elsewhere in the Middle East.

Yet perhaps this all points to the greatest danger of 2022: the swirl of uncertainties around the United States. Adversaries and allies alike question our internal cohesiveness and our external capability and willingness to act.

The glue that has held the global system together during most of the period after World War II—the United States—looks unstuck to many in the world. America doesn’t want China or anyone else to replace its traditional global leadership role, and it’s not retiring from the scene. But it’s struggling to find updated and effective means to shape world affairs.

To be fair, the Biden administration and its remarkably accomplished foreign-relations team diagnosed each of these challenges early and brilliantly.

Indeed, in this space a year ago, I wrote, “Joe Biden has that rarest of opportunities that history provides: the chance to be a transformative foreign-policy president.”

In March, Biden said, “Our world is at an inflection point. Global dynamics have shifted. New crises demand our attention… [O]ne thing is certain: We will only succeed in advancing American interests and upholding our universal values by working in common cause with our closest allies and partners, and by renewing our own enduring sources of national strength.”

It’s never easy to turn rhetoric into execution, but that is what 2022 needs to be about. A president’s first year in office is always messy, and this one has been particularly so.

The true test of Biden’s second year will be less over whether his administration understands the historic nature of the challenges (it does) and more about whether it can organize itself domestically and internationally to manage 2022’s geopolitical challenges.

Worse than questioning our values, our partners and allies are worried about our capability and competence to act.

This year of living dangerously will get off to a brisk start with the Winter Olympics in Beijing and more Russian troop movements near Ukraine. It will wrap up with a Chinese Communist Party Congress likely to make Xi leader for life and US midterm elections.

In this year of living dangerously, however, it may be the United States, more than any other actor, whose actions and inactions will drive the plot.

#1 The new normal is already here. Get used to it.
THE ECONOMIST

As we head into 2022, read this smart, thoughtful reflection by the Economist about how the pandemic will change our lives forever. “Remember how the terrorist attacks of September 11th, 2021 began to transform air travel in waves,” it notes.

“Covid has also helped bring about today’s unpredictable world indirectly, by accelerating change that was incipient,” the newspaper continues. “The pandemic has shown how industries can be suddenly upended by technological shifts. Remote shopping, working from home and the Zoom boom were once the future. In the time of covid they rapidly became as much of a chore as picking up the groceries or the daily commute.” Read more →

To understand China’s direction in 2022, see Elizabeth Economy’s must-read on Xi’s audacious ambitions—but also on how his approach to international politics could be undermining his own goals.

“His understanding of the centrality of China signifies something more than ensuring that the relative weight of the country’s voice or influence within the existing international system is adequately represented,” writes Economy. “It connotes a radically transformed international order.”

She concludes: “Whether Xi is able to realize his ambition will depend on the interplay of many factors, such as the continued vitality of the Chinese economy and military and the support of other senior leaders and the Chinese people, on the one hand, and the ability of the world to continue to resist Chinese coercion and the capacity of the world’s democracies and others to articulate and pursue their own compelling vision of the world’s future, on the other.”

Despite Xi’s optimism, Economy writes, “it appears equally plausible, if not more so, that China has won a few battles but is losing the war.”

Yet, Economy warns, even if Xi’s “outright success appears unlikely,” if he “perceives that his strategy is unraveling, the result for the international community could be as challenging as if he were to succeed.”

China is one of the most important countries to watch in 2022. How the US-led international community responds will continue to be crucial. Read this to understand what they might be facing. Read more →

“Russia has published a set of stringent demands it is making of the U.S. and NATO,” write the authors, “which would end all prospect of Ukraine or any more former Soviet states joining the transatlantic alliance and rewrite many of the principles upholding European security since the end of the cold war.”

Absorb that paragraph for a moment: a stark setting out of what Putin did this week—and what it could mean for the weeks ahead.

“The U.S. and EU are worried that the proposals could be a prelude to war after Russia deployed about 10,000 troops near its border with Ukraine in recent weeks,” the authors report. With the United States and Europe refusing to accept Putin’s demands, all eyes are on the Russian leader to see what he does next. And that will depend, above all, on how he reads US intentions. Read more →

Iran’s nuclear ambitions, now running unchecked, will be another thorny problem the United States must continue to tackle in 2022. The Washington Post’s David Ignatius offers a typically smart plan B as talks in Vienna stall.

“Deterrence is about credibility — and that unfortunately is sagging with the Biden administration,” Ignatius writes. With that in mind, he suggests the United States turn to the International Atomic Energy Agency to manage Iran’s nuclear program.

He argues that would “put the emphasis back where it belongs — on Iran’s secret nuclear program. Right now, Iran is using the talks as a propaganda forum to demand compensation for Trump’s 2018 decision to abandon” the nuclear agreement. Read more →

#5 The Secret History of the U.S. Diplomatic Failure in Afghanistan
Steve Coll and Adam Entous | THE NEW YORKER

Few events more defined American foreign policy in 2021 than the tragedy in Afghanistan. The first in a two-part series, this must-read article from Steve Coll and Adam Entous—some of the best reporters writing on Afghanistan today—reads like a Greek tragedy.

Faced with an intractable Taliban and two different American administrations exhausted by the Afghan War, a parade of diplomats, soldiers, and politicians grapples with an impossible task, culminating in the cliffhanger of President Ashraf Ghani’s last-minute escape from the country.

“The debates and decisions in Washington, Kabul, and Doha that preceded the Islamic Republic’s fall took place largely in private,” write Coll and Entous. “Hundreds of pages of meeting notes, transcripts, memoranda, emails, and documents, as well as extensive interviews with Afghan and American officials, present a dispiriting record of misjudgment, hubris, and delusion from the very start.”

Read this first draft of history in its entirety if you want to understand what went wrong. Read more →

Is the EU about to build its own military capacity? Thanks to Germany, the jury’s still out.

Supporters of increased European military integration have taken the new coalition’s interest in an assertive foreign policy as a sign that EU military capacity may one day be feasible. But they should temper their hopes.