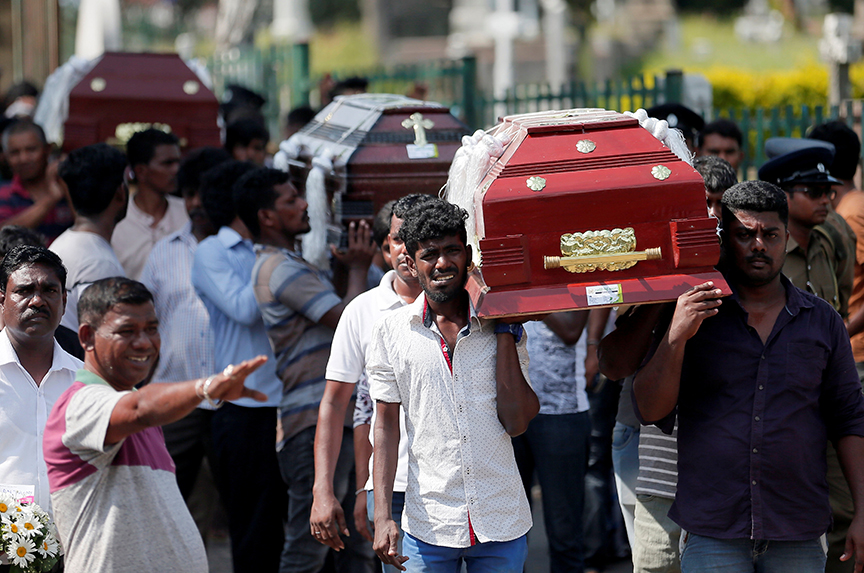 Coffins of victims are carried during a mass for victims, two days after a string of suicide bomb attacks on churches and luxury hotels across the island on Easter Sunday, in Colombo, Sri Lanka, on April 23. (Reuters/Dinuka Liyanawatte)

Washington – This one is both highly personal and disturbingly global.

On Wednesday afternoon last week, fifth grade students of Sidwell Friends Middle School walked down Wisconsin Avenue to the Washington National Cathedral to say goodbye to one of their own. A suicide terrorist’s bomb – at an Easter Sunday brunch at a Sri Lankan hotel – had taken the life of their classmate, Kieran Shafritz de Zoysa, age 11.

They gathered in pews with parents to celebrate the life of Kieran, who had died along with more than 250 others from nine coordinated attacks. They heardabout his pet ball pythons and the wooden mazes he built for them, about his too-long showers and tendency to misplace things, about his knack for math and science and his gentle spirit and captivating smile.

Our daughter Johanna, also 11, had been a classmate and friend of Kieran since pre-kindergarten. Like her classmates, she was looking forward to his return from a year abroad in Sri Lanka. Like the others, she couldn’t fathom why God would take this sweet soul so prematurely, this boy with the biggest heart and the most inventive Halloween costumes.

The pastor couldn’t help them. “How did this happen? Why did this happen? These are the questions that haunt us,” said the Rev. Randolph Marshall Hollerith, dean of Washington National Cathedral. “Why God allows such tragic events to take place, I do not know.”

Yet he did offer a response: “We have to push back against the evil that would divide us, the evil that seeks to create fear, hatred and destruction. We have to push back, not with violence but with a renewed commitment to reach out to one another, to be like Kieran and seek to build new relationships, new understandings, to live with love and hope and courage.”

“This is Kieran’s example to us.”

What Reverend Hollerith didn’t say was that events of recent weeks have underscored that the community that pushes back would need to be global and more coordinated and resourceful than is currently the case. The ISIS terrorist cancer that took Kieran’s life isn’t defeated or even in remission, but rather it is metastasizing since its loss of a caliphate first in Iraq and then finally Syria.

The Trump administration’s National Security Strategy has represented a shift from the post 9-11 emphasis on fighting terrorism to address a new era of major power competition with China and Russia.  However, what’s growing clearer with each day is that the United States and its allies will likely have to contend with extremist, Islamist terrorism for perhaps decades to come.

On Monday, just two days before Kieran’s funeral, the Islamic State released a video of its leader and the world’s most wanted man, Abu Bakr Al-Baghdadi, signaling this new challenge. “Our battle today is a battle of attrition, and we will prolong it for the enemy,” he said in an 18-minute video, “and they must know that jihad will continue until Judgment Day.”

He praised the Sri Lanka Easter attacks as an act of vengeance against “Crusaders” for ISIS’ last loss of territory in Baghouz, Syria and added “Praise to Allah” that “among the dead were Americans and Europeans.”

Much remains to be explained about the video and what it says about the well-being and location of the ISIS leader and the capabilities and reach of his terrorist organization. The apparent intent of Baghdadi’s decision to surface, despite a $25-million bounty on his head, is to reassert his authority and send a signal that the Islamic State still exists and that he is still in charge, even after having lost his caliphate. It’s believed several thousand battle-hardened ISIS combatants have now reformed as an international network of militants that will sometimes remain silent and at other times launch unpredictable attacks in underprepared settings like Sri Lanka.

Graeme Wood in the Atlantic studies the image Baghdadi projects in the video, his first since declaring the caliphate in 2014. He has morphed himself from the religiously robed, rhetorically grandiose leader of a caliphate with a well-armed military, tax collectors and health inspectors to “a terrorist leader, an insurgent, a shadow leader of a subterranean movement of global reach.” The garb is a pocketed vest, rifle by his side, with a sheet as backdrop.

James Stavridis, former Supreme Allied Commander Europe, calls  what is coming at us “Terrorism 3.0,” building on the first chapter of modern-day terrorism of such organizations as the Red Brigades of Italy and the Baader-Meinhof gang of Germany and the second version of radical, sometimes international groups like Al-Qaeda, Al-Shabab and Boko Haram.

Writes Stavridis, who is also an Atlantic Council board member, “In a business context, the Islamic State is like an international conglomerate that has untethered itself from the costly, time-consuming business of operating retail bricks and mortar. A global map showing ISIS inspired or conducted attacks is revealing, far beyond anything al-Qaeda has managed. And, no question, it will continue to conduct lethal attacks, seeking over time to obtain weapons of mass destruction – chemical, biological, radiological and cyber.”

In honor of Kieran, the pastor is certainly right that his community unify and peacefully embrace common cause with “love, hope and courage.” If the world community hopes to prevent countless other such tragedies, however, it must at the same time recognize that his tragic death coincides with a dangerous new chapter of global terrorism that will require an unprecedented degree of international intelligence coordination, US government attention and recognition that ISIS isn’t defeated but changed.