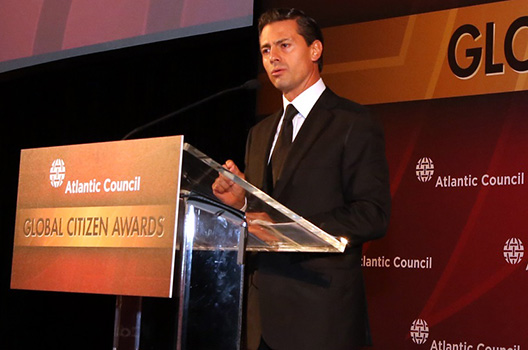 The Atlantic Council awarded Mexican President Enrique Peña Nieto and other honorees its Global Citizen Award on Sunday, September 21, 2014, at the American Museum of Natural History in New York City.

It was the first time that a Latin American president received the award.

“Our honorees embody in dynamic and diverse ways what it means to be a global citizen,” said Frederick Kempe, Atlantic Council president and CEO. “In their impressive careers, all have emphasized the need for a common community of values to advance peace, prosperity, human rights, and cultural understanding.”

President Peña Nieto was recognized for his outstanding leadership in establishing the “Pact for Mexico,” which in less than two years has secured sweeping reforms. “These reforms establish the modern legal framework necessary for Mexico to realize its full potential and open up more opportunities for its people,” Peña Nieto said. He concluded his acceptance speech urging the international community to “know Mexico, a country that dared to change and today, is in motion.”

“The Atlantic Council decided to grant President Peña Nieto the Global Citizen Award because this president is a symbol of the profound and necessary transformations taking place in the region,” said Peter Schechter, director of the Adrienne Arsht Latin America Center.

“Many in Europe and in the United States have an outdated vision of Latin America. Today, this region is committed to the development of the middle class, it is home to numerous innovative international companies that are competitive in a globalized world, and it is a region that claims a new, young political generation that governs without fear of combining progressive thinking with strengthening the private sector,” said Schechter.

“Peña Nieto is an example not only for the rest of Latin America, but for the United States as well,” said Jason Marczak, deputy director of the Adrienne Arsht Latin America Center. “In our country, Congress is stuck and cannot agree on anything. We should learn from Mexico where collaboration and success are possible, even between opposing political groups.”

Other honorees this year included: the president of Ukraine, Petro Poroshenko; the former prime minister of Israel, Shimon Peres; the former prime minister of Singapore, Lee Kuan Yew; the actor, director, and producer Robert De Niro; and Llewellyn Sanchez-Werner, a pianist, composer, and philanthropist. Former Secretary of State of the United States and winner of the Nobel Peace Prize, Henry Kissinger, gave the opening remarks of the event.