With mounting pressure to deliver on climate ambition and the daunting prognosis elucidated in the Intergovernmental Panel on Climate Change’s 1.5°C Report, the need to deploy carbon capture and storage (CCS) technologies to decarbonize hard-to-abate sectors and achieve negative emissions has become increasingly more urgent.

In tandem with policy and government support around the world, private sector action has catalyzed the next wave of global carbon capture and storage projects. Particularly in the United States, innovative incentive mechanisms and sustained government support are driving new CCS project announcements. In emphasizing large-scale emissions, cost, and risk reductions, the next wave of CCS facilities incorporates emissions clusters as well as new business models for carbon transport and storage. At the same time, negative emissions technologies have also gained noticeable momentum.

This event serves as the US launch of the Global CCS Institute report, Global Status of CCS 2019: Targeting Climate Change, initially released at COP 25 in Madrid. Distinguished panelists explore the current status of carbon capture and storage, the next generation of CCS projects, policies, and technologies taking shape around the world, and the important part they play in global decarbonization.

On February 4, the Atlantic Council Global Energy Center hosted an event showcasing the Global Carbon Capture and Storage Institute’s most recent report, Global Status of CCS 2019: Targeting Climate Change, in tandem with a lively discussion with panelists Maya Batres, Lee Beck, Ryan Edwards, and Janet Peace, moderated by David Livingston, deputy director of climate and advanced energy at the Atlantic Council Global Energy Center. Panelists discussed the current status of carbon capture and storage (CCS), the next generation of CCS projects, policies, and technologies taking shape around the world, as well as the role of CCS facilities in global decarbonization.

Damon Wilson, Atlantic Council executive vice president, introduced the event and provided context on the critical role that carbon capture and storage policy must play in combating climate change. He emphasized the important role that these technologies will play in achieving the net-zero emission transition, before introducing keynote speaker Senator Sheldon Whitehouse.

US Senator Sheldon Whitehouse (D-RI) took the podium to deliver keynote remarks on Congress’ role in promoting carbon capture and climate mitigation policy. Whitehouse is a congressional climate champion, as well as a legislative advocate for CCS technology and carbon pricing. In his remarks, Whitehouse voiced his frustrations with the Trump Administration’s refusal to implement biparistan CCS legislation, as well as Congress’ inability to pass or meaningfully consider carbon pricing reform. Specifically, he rebuked the US Department of the Treasury for dragging its feet on the 45Q CCS tax credit, deploring the delay as inexcusable. Whitehouse called upon private sector actors for their support in moving the needle on CCS development and climate action, acknowledging that corporate buy-in will be necessary to achieve widespread US climate goals. Whitehouse concluded his remarks with a riling call to action, declaring that it is time for the United States to get serious about the climate crisis.

Jeff Erikson, general manager at the Global Carbon Capture and Storage Institute, followed with a presentation detailing the Institute’s annual report: Global Status of CCS 2019: Targeting Climate Change. Erikson relayed the report’s key takeaways, explaining that urgent action is required to achieve climate change targets and that CCS is vital to reaching or surpassing climate goals. The report also communicates some worrisome realities; even with national and sub-national climate goals on the table, progress has been slow, greenhouse gas emissions continue to rise, and fossil fuels remain rooted in our economy and its future. These points highlight the gap between rhetoric and reality.

According to Erkson, CCS is versatile and effective, has high potential for job creation, and will enable the transition to a low-carbon industrial economy. CCS is expanding, with growing adoption across different sectors, such as power generation and industrial production. Erikson explained that the majority of current projects in operation and under development are in the United States, followed by Europe and China.

Distinguished panelists Lee Beck, senior advisor at the Global Carbon Capture and Storage Institute and a women leaders in energy fellow with the Atlantic Council Global Energy Center; Janet Peace, senior vice president of Policy and Business Strategy at the Center for Climate and Energy Solutions (C2ES); Ryan Edwards, low carbon policy advisor at Oxy Low Carbon Ventures; and Maya Batres, project manager of Energy and Land Use at The Nature Conservancy, made their way to the stage following Erikson’s report briefing.

The role of CCS in the decarbonization portfolio was a major focus of the panel’s conversation, with emphasis placed on the need for governments to embrace CCS. Panelists underscored that not only is CCS essential to reach net-zero targets but it is also economically beneficial. Speakers discussed the incorporation of new CCS technologies, such as direct air capture (DAC) and industrial CSS at cement and steel manufacturing sites, in addition to CCS sector clustering. The panelists discussed specific legislation, including the US 45Q CCS tax incentive and California’s low-carbon fuel standard as innovative first steps in moving towards the net-zero emissions transition.

Currently, most CCS projects have been single source, single sink. Looking forward, the panelists agreed that shared, interconnected infrastructure will play an important role. When there are multiple industries and sources capturing CO2 that can all feed into one shared transport infrastructure, such as a pipeline, not only can more CO2 be collected, but costs in the system will be lowered. By lowering costs across the system, more projects can be implemented.

The session then turned to the audience, with attendees raising important questions concerning how CCS could help achieve negative emissions, moving beyond net-zero goals. The audience also asked about infrastructure, policy, and the possible effect of legislative action on the future of CCS research and development. In addition, audience members questioned how California’s low-carbon fuel standard could be replicated elsewhere, and asked about the role of oil and gas as a climate solution provider. 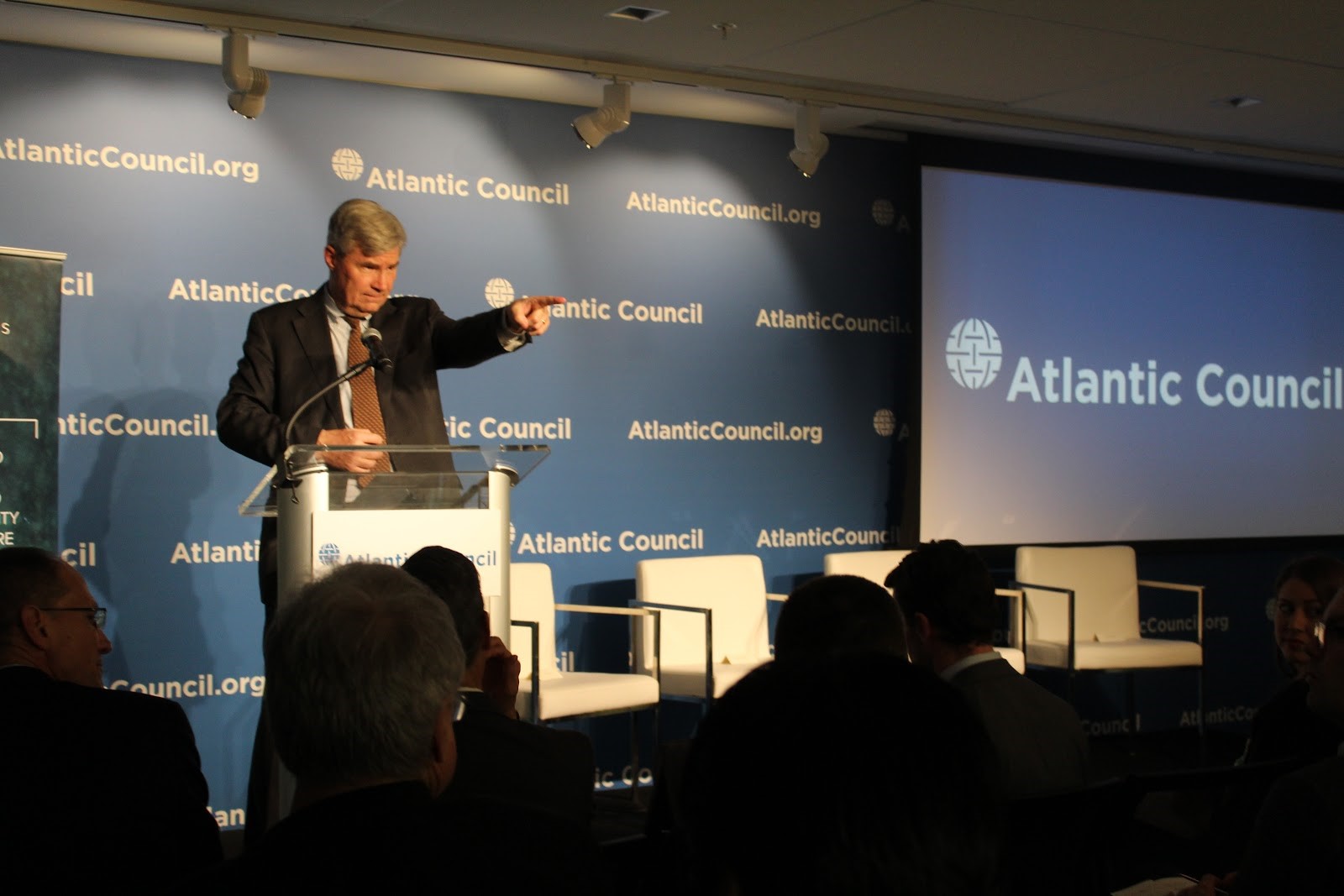 Senator Sheldon Whitehouse (D-RI) takes questions from the audience following his remarks at the event on February 4, 2020. 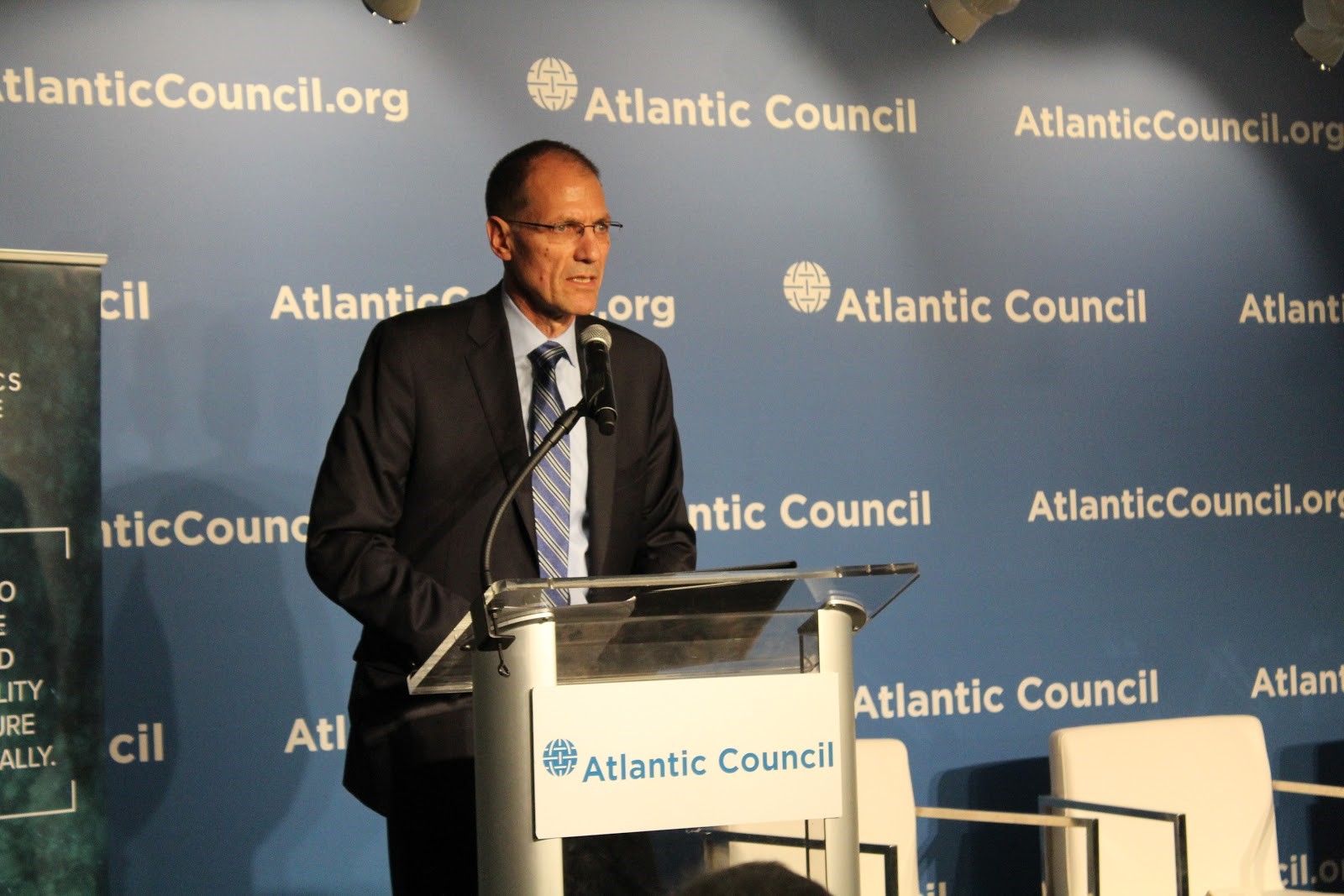 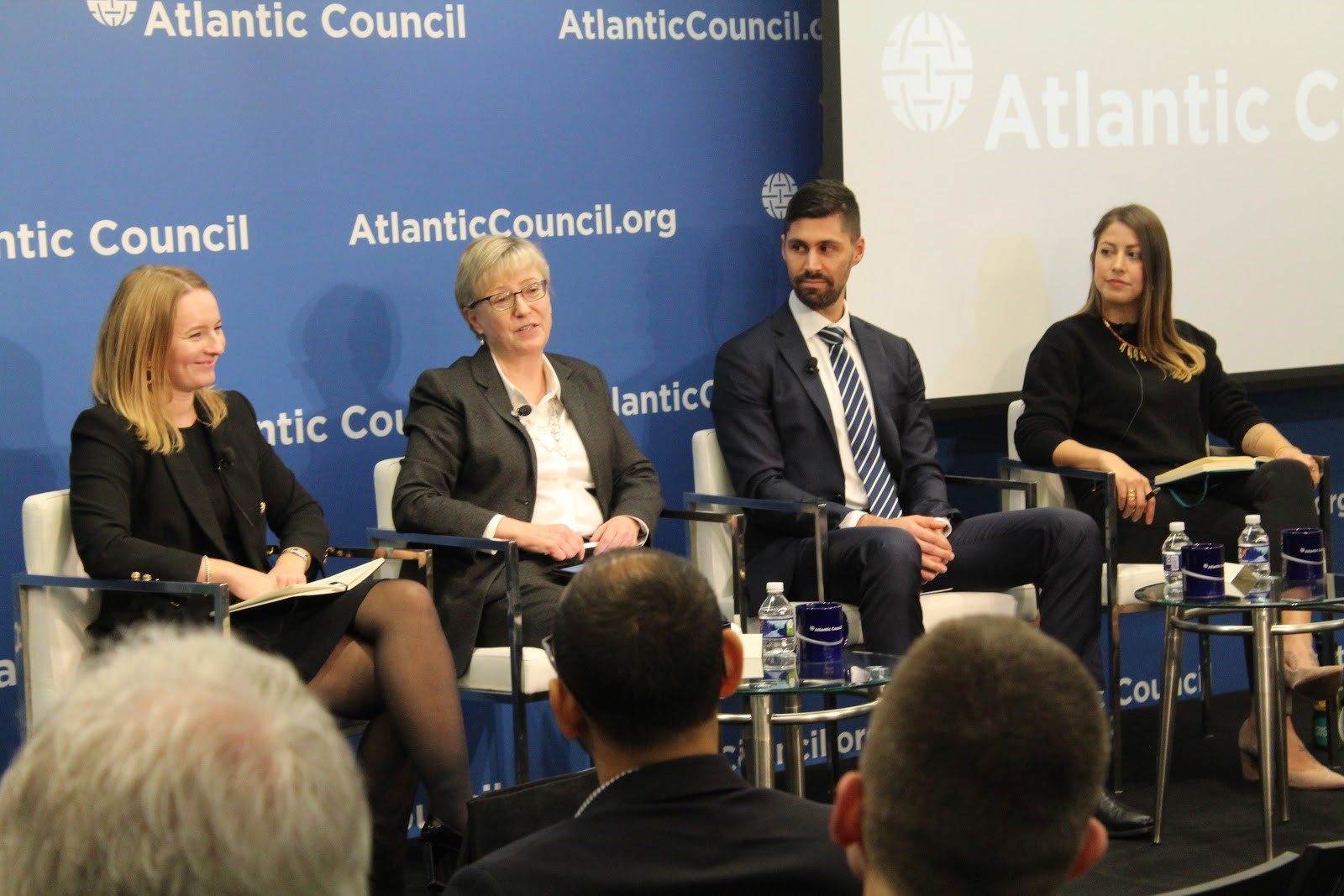 Left to right: Lee Beck, Janet Peace, Ryan Edwards, and Maya Batres discuss the next wave of CCS developments and facilities both in the US and abroad at the event on February 4, 2020. 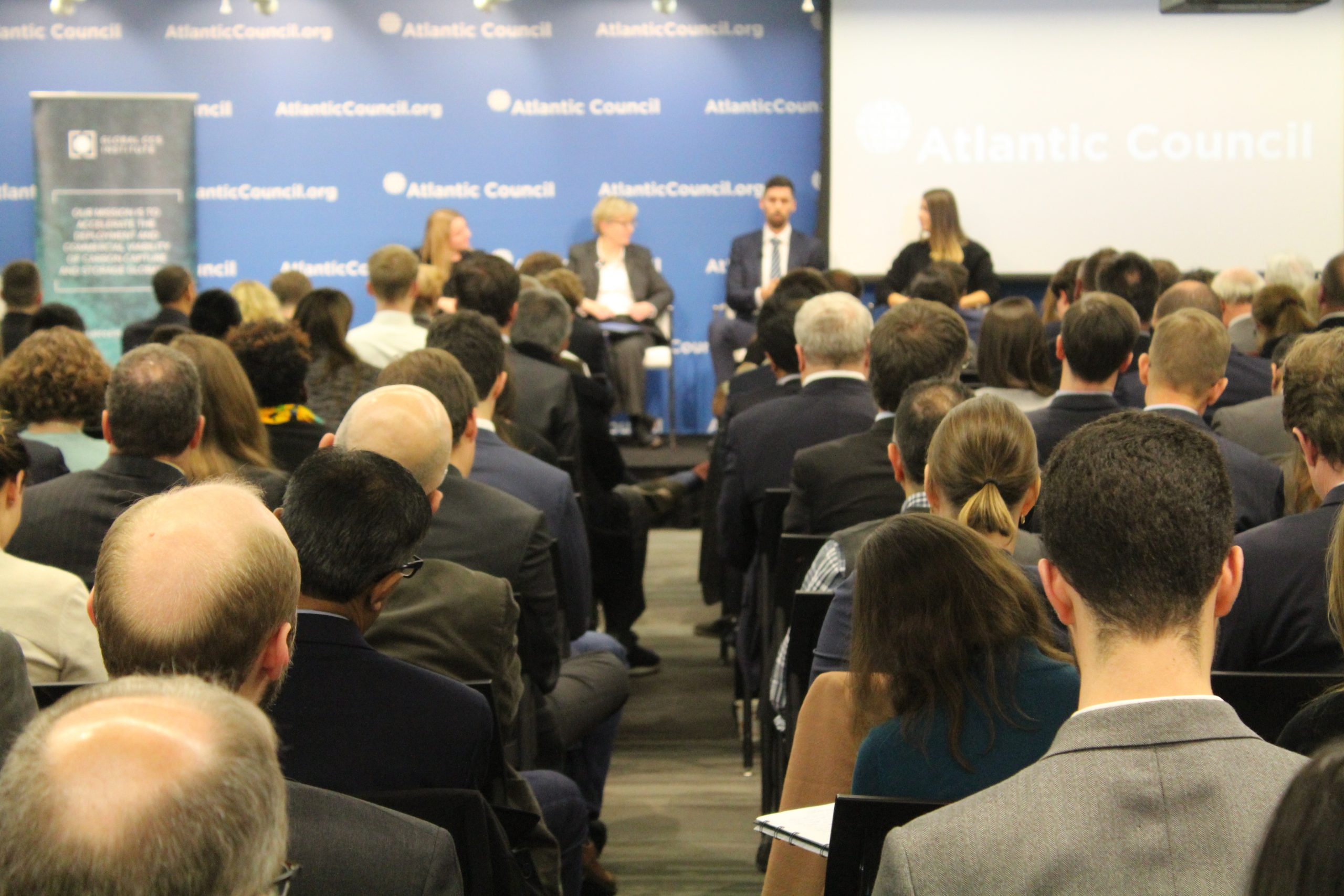 “The global status of CCS: The next wave of carbon capture” event at the Atlantic Council on February 4, 2020.

US Senator Sheldon Whitehouse (D-RI) blasted the US Government for its delay in implementing carbon capture and storage (CCS) legislation and the US Congress for refusing to adopt serious carbon pricing reform during remarks to the Atlantic Council on February 4. Whitehouse rebuked the US Department of the Treasury for dragging its feet on implementing the ”45Q” CCS tax credit.

Learn more about our Climate and Advanced Energy Program

The Climate and Advanced Energy Program works to understand, explain, and shape the search for power and prosperity in a decarbonizing world.