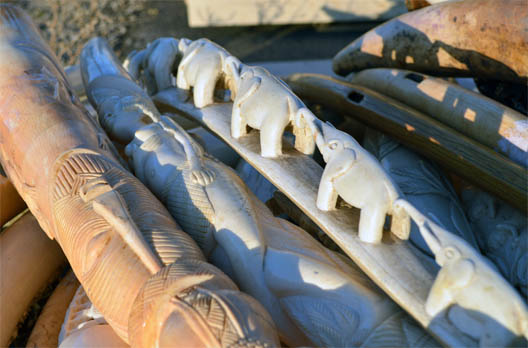 Bottom Line Up Front
The demand for illegal African ivory has boomed in recent years, driven by flourishing Asian markets and facilitated by global trafficking networks


The Black Ivory Boom
The largest and fastest growing ivory markets are found in East and Southeast Asia. China alone represents 70 percent of global consumption, followed distantly by Thailand and Vietnam. Rising demand in these countries—driven by the expansion of their middle classes—has produced a rapid upsurge in the proportion of illegally killed elephants (PIKE) in Africa. The rate of elephant poaching has hit highs not seen since 1989 when parties to the Convention on International Trade in Endangered Species of Wild Fauna and Flora (CITES) banned international commercial trade in elephant specimens. In 2012 alone, a low estimate of 22,000 African elephants were illegally slaughtered, a kill rate which could shrink the species’ total population by twenty percent within a decade.

Meanwhile the illicit ivory trade has flourished. Since 2007, the weight of poached ivory traded has more than doubled. In 2013 alone, authorities confiscated 41.6 tons of ivory—the largest quantity seized in 25 years, and proof of a 20 percent increase of large-scale ivory movements since 2011.

While the increase in seized ivory might reflect a more effective enforcement of CITES, it probably also indicates growth in the black ivory trade and the involvement of international organized crime. Ivory is a highly exploitable, low risk, and lucrative product: a single raw kilogram can fetch $3,000 on the Chinese black market. These high profit margins appear to have attracted the attention of large-scale criminal syndicates that have exploited a pre-existing infrastructure for human, drug, and arms trafficking to kill African elephants, smuggle massive quantities of ivory off of the continent, and unload it onto international black markets.

How much blood on the ivory?
The UN Security Council (UNSC) as well as a host of international agencies and actors have recognized that poaching has strengthened global trafficking networks and destabilized African states, and has the potential to fuel violence and bolster terrorist and insurgent groups. The problem is not restricted to Africa’s conflict zones; in most states with large populations of free-ranging elephants, poaching has become more frequent and sophisticated, transforming parks and nature reserves into combat zones. In states like Kenya, Chad, and the Democratic Republic of Congo DRC), park rangers are often outgunned, outnumbered, and under-trained, and in consequence have suffered unacceptably high casualties: estimates range from 1,000 to 5,000 wildlife officials killed in the last decade. Risks to rangers and the number of elephant deaths tend to be greater in the conflict zones of Central Africa, where lawlessness and the prevalence of small arms create optimal poaching conditions for predatory groups like Mai-Mai Morgan. But well-governed states like Botswana have also suffered and their parks will become increasingly dangerous as poaching continues to shift from West and Central Africa to East and Southern Africa.

Conservationists claim that rebel and terrorist groups are increasingly taking advantage of the ivory trade as a low risk, high reward source of illicit income. The Lord’s Resistance Army in Uganda, the Central African Republic (CAR), and the northeastern DRC, the Séléka in the CAR, and the Janjaweed in Sudan are all accused of hunting elephants and selling their tusks. But the link between poaching and terrorism has proven hard to pin down. A high-profile investigation conducted in 2011 and 2012 claimed that al-Shabab, the terrorist group responsible for last September’s Westgate Mall attack, draws 40 percent of its revenue from ivory poaching. The report was widely discredited by security analysts, but continues to be trotted out as proof of the link between poachers and terrorists in the popular press (most recently in the op-ed section of theWashington Post). However, there is evidence that militias within the DRC have poached elephants for ivory. A July 2013 UNSC report on the DRC found that the large militia controlled by “General” Hilaire Kombi was financed primarily by exploiting gold and ivory, and that Kombi had provided the Mai-Mai Morgan with arms and ammunition in exchange for ivory. Both documented cases illustrate the potential for ivory to become a more significant conflict resource.

No silver bullets
Proof may be elusive, but two UNSC resolutions approved in late January are an indication that international authorities are taking the problem more seriously. Resolutions 2134 and 2136 have sanctioned wildlife traffickers that trade with armed groups in the CAR and the DRC. These resolutions are the first to specifically name wildlife trafficking in a sanctions regime and might be a first step along the long road to disassembling the supply chain and forming a more robust strategy.

The black ivory trade sits at the nexus of security, governance, development, and conservation issues, and has thus proven a difficult problem to solve. Anti-poaching programs have greatly expanded in recent years, but the expansion has not kept pace with the growth of the trade. And successes have often come at a high cost: in Tanzania, for example, anti-poaching operations have effectively reduced poaching, but at the expense of grave human rights violations. Militarized efforts in a few states, such as Gabon and Togo, have worked, but the elephant ranges in these states are relatively small, and governance is relatively good, making it unlikely that the approach could translate to countries like the DRC. Unless the demand side of the equation is addressed, African authorities will struggle to sustain their efforts.