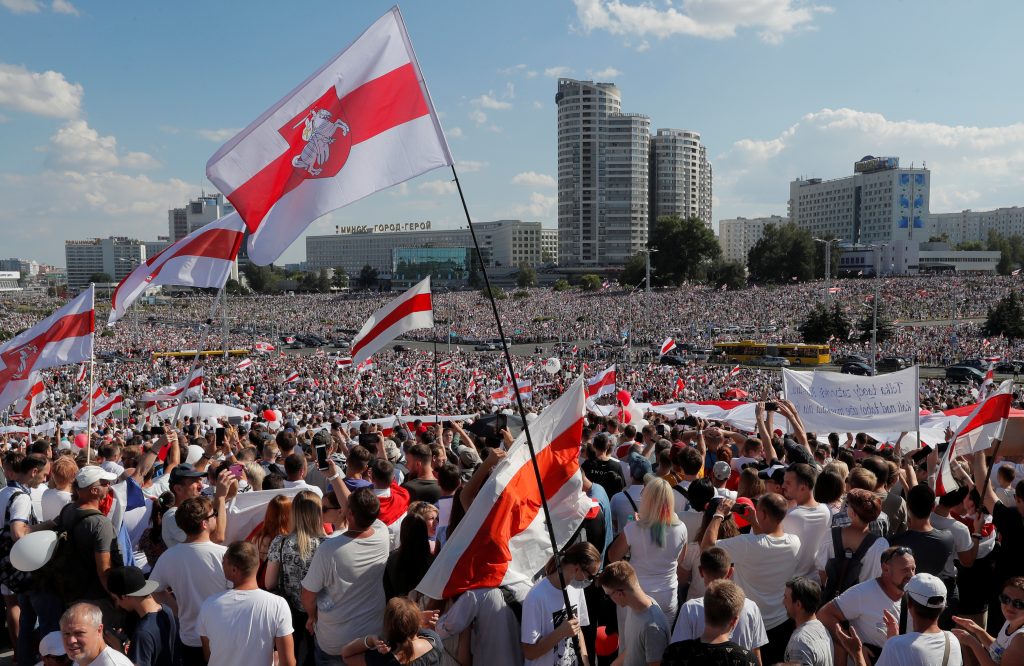 United States President Joseph R. Biden Jr. has an historic opportunity to bring Europe together and reverse the tide of dictatorship by building an international coalition to support democracy in Belarus. In 2020, Belarusians unexpectedly called Alyaksandr Lukashenka’s legitimacy into question in the country’s August presidential election. Lukashenka brazenly rigged the results, claiming that he took 80 percent of the vote, but neither the United States nor the European Union (EU) recognizes his victory. A months-long protest movement has coalesced that demands new elections under the supervision of the international community.

Recent years have seen no better chance for US leadership to facilitate lasting positive change in Europe than the crisis in Belarus. But how to secure democratic change in Belarus is not simple given internal resistance
and Moscow’s determination to prevent another “color revolution.”

Lukashenka is likely finished, unable to restore any authority or legitimacy. But he is seeking to hang on despite Moscow’s efforts to arrange a pliable replacement who would preserve Minsk’s pro-Russian orientation. Managing Moscow’s efforts to prevent an aroused citizenry from choosing their own leader is no easy task. Russia remains the key geopolitical player in Belarus, often plays the long game, and may be willing to countenance military options that the United States cannot.

Perhaps the key fact is that Belarusians have made it amply clear that they want accountable leaders that they can choose and dismiss for themselves. More than thirty thousand peaceful protesters have been detained since August, more than three hundred and fifty police officers have defected, and ordinary Belarusians are no longer afraid to voice their opposition to the regime. Kremlin support for the ongoing repression risks turning the Belarusian people—historically friendly toward Russia—in a pro-European direction. These changes in Belarus are something that Moscow cannot ignore, and the United States and its allies must nourish and strengthen them in consistent ways that avoid and deter a Kremlin overreaction. Biden, with his long experience promoting US values and interests and his determination to strengthen transatlantic relations, is ideally situated to promote clear support for the people of Belarus that does not directly challenge Moscow’s security interests.

To promote the growth of the democratic movement in Belarus, strengthen the current opposition leader, and weaken support for Lukashenka:

To manage the Russian reaction to developments in Belarus with a view to preventing a Kremlin crackdown:

These three recommendations on managing the Kremlin’s reaction are a package and must be carried out together. It would be disastrous to accommodate the Kremlin by discouraging Belarus from turning to the EU while not establishing clear redlines against Moscow’s potential intervention in Belarus.

This full strategy paper examines US interests, the domestic situation in Belarus, Moscow’s dilemma, and the many ways the West can influence the situation.

Image: People take part in a protest against the presidential election results demanding the resignation of Belarusian President Alexander Lukashenko and the release of political prisoners, in Minsk, Belarus August 16, 2020. REUTERS/Vasily Fedosenko