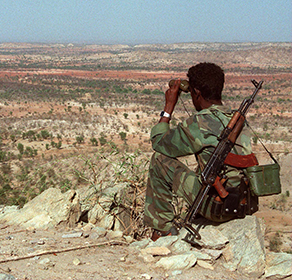 Eritrea has long been stigmatized as a regional “spoiler” by Washington, and despite little evidence of wrongdoing, the country remains under Security Council sanctions for supporting terrorist groups in Somalia.

Now is the time to rethink that relationship, argues Atlantic Council Africa Center Deputy Director Bronwyn Bruton in a new issue brief entitled “Eritrea: Coming in from the Cold.“ In the brief, Bruton traces the contours of the US-Eritrean relationship since the country’s independence in 1991, before making the case that a number of recent, surprising developments in the country illustrate its determination to constructively reengage with the international community.

Bruton points out that the US insistence on perpetuating Eritrea’s isolation has not had the desired effect on the widely-criticized human rights situation in the country. Instead, she argues, continuing the policy of isolation creates a host of medium-term risks for the United States, as Eritrea pivots away from the West and deepens its relationship with China and the Gulf. Furthermore, with rising instability in Ethiopia and ongoing state failure in South Sudan and Somalia, Washington’s strategic interest in engaging with Asmara has never been stronger.

Bruton concludes the publication by making the case that it is not too late to repair the US-Eritrea relationship, and lays out recommendations for how US policymakers in the upcoming administration could begin to move the relationship onto a more constructive footing.