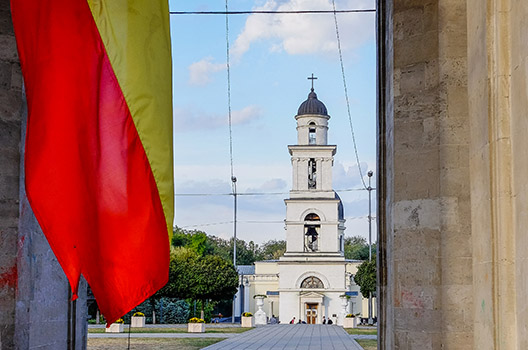 The Republic of Moldova, a sliver of land bordering the European Union (EU) and NATO’s eastern edge, finds itself at a critical crossroads twenty-seven years after gaining independence from the Soviet Union. Eager to forge closer ties with Brussels and Washington, the government has made concerted efforts to bring the country closer in line with the West’s expectations and conditions required for a strong ally and partner. Genuine progress has been made over the past couple of years and the country has achieved financial and economic stability with the support of its development partners; it has reached over 4 percent economic growth, lowered inflation, fixed huge problems in the banking sector, and replaced Russia with the EU as its main trading partner.

Since its independence, Moldova has sat on the divide between East and West. To ensure its influence in Moldova, and like other nations in the region, has moved fitfully toward an open society and market economy.

Maia Sandu owes her victory in part to a new dynamic force in Moldovan politics: the diaspora, which has kept the Moldovan economy afloat for years and is now making its political voice heard, even as the oligarchs and their allies attempt to keep the diaspora on the sidelines.

While many are already looking to the January run-off elections in the US state of Georgia, another run-off looms in Eastern Europe. The Republic of Moldova is in the midst of a tightly contested presidential election colored by a frustrated electorate, foreign influence in its politics and economy, and rampant misinformation on social media.

Will Ukraine become a giant Moldova?

Without a red-tape slashing revolution, Ukraine will become a big Moldova—a bedroom country for migrant workers building the dynamic economies of eastern Europe.

However, at the same time, the country is backsliding in some key areas. Democracy appears to be on the decline; a legitimate election of mayor in the capital of Chisinau was recently voided; the judicial system remains controlled by powerful insiders; and independent media is almost nonexistent. This report will highlight some of the extensive progress made by Moldova’s government and citizens as well as provide suggestions on how to ensure that democracy is not lost, and the rule of law is developed during a critical period in the country’s political and economic development.