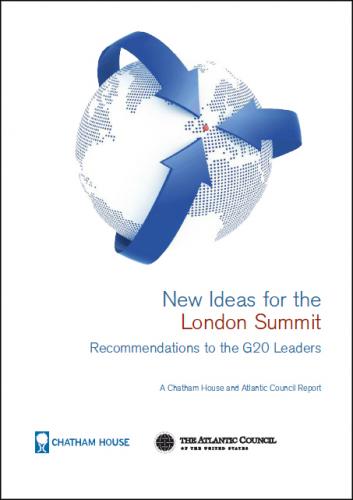 What started last year as a growing international credit crunch and, by September, a global banking crisis has now spread into the real economy. International trade, investment and economic growth are all contracting. A drastic curtailment of credit, collapsing global demand and a loss of trade finance is having a devastating economic effect on both the developed and developing worlds, especially those economies that are heavily dependent on exports.

The world economy is falling into a deep recession. After more than a decade of robust economic expansion that has contributed to improve the living conditions of millions of people, the current crisis threatens to reverse this progress and set in train a backward process of ‘deglobalization’ in both the developed and developing worlds.

The London Summit on 2 April provides a critical moment to broker international agreements and solutions among governments representing 80 per cent of global GDP on how to halt this collapse. The summit must restore confidence in the positive potential of an integrated world economy. It must demonstrate a shared commitment to the actions required to halt the crisis. And, to secure this shared commitment, it must set in place a rule-based and inclusive framework of international economic and financial governance.

With these imperatives in mind, the contributions to this report point to a set of overarching priorities for the London Summit. The summit should have an ambitious, but manageable and focused agenda that commits G20 governments to immediate and concerted action to stop the crisis in the short term and sets out specific targets and deliverables that will have a positive systemic impact over the medium to long term.

The G20 is an informal governance mechanism with no experience in managing a crisis, and there is a limit to what it can accomplish. Since the first G20 leaders’ summit in November 2008, the ever-worsening economic outlook has burdened the G20 process with expectations that are far too high and and agenda that is too complex. The existing G20 agenda of long-term financial reform has become entangled with immediate concerns about orderly crisis resolution and about the impacts of the crisis on the development and environmental agendas.

The immediate challenge now for the London Summit is to focus the agenda and embrace concerted action to stop the crisis. However, it is clear that immediate action by G20 leaders to halt the deepening recession will need to rest upon a central political trade-off. Agreement across the major G20 countries on the importance of stimulating the world economy (championed by the United States, United Kingdom and Japan) will require that G20 leaders also make specific commitments to international financial regulatory reform (as France, Germany and the majority of other EU leaders have consistently argued). With this compromise in place, the summit must also commit to halt any rise in protectionism, which could prove devastating for the world economy and especially for the developing world.

It will not be sufficient for G20 leaders to issue general declarations at the London Summit. To be credible, there needs to be detail. We offer this sort of detail in the synopsis of the report’s recommendations below.

FOR IMMEDIATE AND SHORT-TERM IMPACT
1. Agree on a path to sustained resumption of economic growth
G20 leaders must articulate their conviction at the London Summit that stimulating economic growth with all appropriate policy tools is the first priority, and that sharing the burden will be essential to achieving this task.

2. Immediately increase systemic capacity for crisis management
International institutions must be in a position to provide support to countries in dire need of financial assistance. This can best be achieved if the G20 agrees to increase the IMF lending facilities.

3. Reject protectionism and promote open markets
While increases in actual tariffs or other WTO-illegal actions remain low, protectionism is creeping in through non-tariff barriers as well as through measures devised to bail out specific sectors and industries. In order to withstand these growing protectionist pressures and preserve global cohesion, there are four steps which the London Summit could take that would be of immediate effect:

The most effective way to defuse protectionist pressures is to reignite economic growth quickly. When governments and the public see the burden of delivering economic recovery policies as fairly shared across countries, this should reduce the political pressure for protectionist retaliation.

FOR MEDIUM- AND LONG-TERM IMPACT
4. Improve the financial regulatory framework
Agreeing at the London Summit to improved supervision and rules for financial institutions and instruments will help restore confidence in the financial sector – provided that countries resolve the issue of ‘toxic assets’ – and also help secure concerted action to drive forward measures to reignite growth. It is essential, however, that the regulation is appropriate and correctly targeted. Rushed action could be counter-productive. Reforms should take account the substantial work already accomplished in international financial regulation, correct mistakes and fill gaps. The London Summit should commit to the following goals:

ADDRESS GLOBAL IMBALANCES
A focus on financial regulation and reform is insufficient to address some of the essential drivers of the financial crisis. To that end, the London Summit should agree to:

We are under no illusion. Many of these proposals are very challenging and will require G20 leaders to spend a great deal of political capital. Strong leadership will be critically important to spur the most reluctant leaders to action. The UK is chairing the London Summit and as such it needs to send a very strong signal about its commitment to reform. It is for this reason that this report contains the proposal that at the London Summit the UK should volunteer to give up its single chair in the IMF, which could then form part of an overall IMF reform agreement to streamline European representation.

G20 leaders need to communicate clearly to the public about the basis, rationale and sequencing of their actions in order to sustain popular support through what will be a protracted period of economic turmoil. When carrying out stabilization and stimulus policies, G20 leaders should also act transparently and be clear about the intentions of domestic policies so that they do not serve as a justification for future protectionist retaliation.