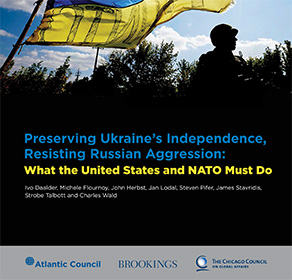 The Kremlin is waging a hybrid war in Ukraine’s east. Initially covert, Moscow’s intervention became increasingly open when it sent in regular army units in August. Since the Minsk ceasefire, signed in September, Kremlin-supported separatists seized 500 square kilometers of Ukrainian territory. The ceasefire was an illusion. Despite the agreement, Russia continued to send hundreds of tanks, armored personnel carriers, missiles, and artillery into Ukraine. A significant numbers of Russian soldiers are now in the country, with more amassed on the border. Today, Kremlin’s surrogates in Ukraine are increasing the military offensive into Ukraine’s southeast.

Preserving Ukraine’s Independence, Resisting Russian Aggression: What the United States and NATO Must Do, a joint report by the Atlantic Council, Brookings Institution, and the Chicago Council on Global Affairs, argues that to deter further aggression by the Kremlin and its surrogates, Ukraine urgently needs significant military assistance. Drawing on discussions with senior US, NATO, and Ukrainian officials, the authors—Ivo Daalder, Michele Flournoy, John Herbst, Jan Lodal, Steven Pifer, James Stavridis, Strobe Talbott, and Charles Wald—argue that in order to enable Ukraine to defend itself, the US government should provide Ukraine $3 billion in nonlethal and defensive lethal military assistance over the next three years.

If President Vladimir Putin’s military intervention in Ukraine is not stopped, the West can expect further Kremlin provocations elsewhere. Thanks to Western economic sanctions, the Russian economy is paying a price for the Kremlin’s aggression. But sanctions alone have not halted that aggression. Providing US military assistance to Ukraine may deter further Moscow from further aggression; but even if it does not, military assistance will make it harder for Moscow to seize more Ukrainian territory.