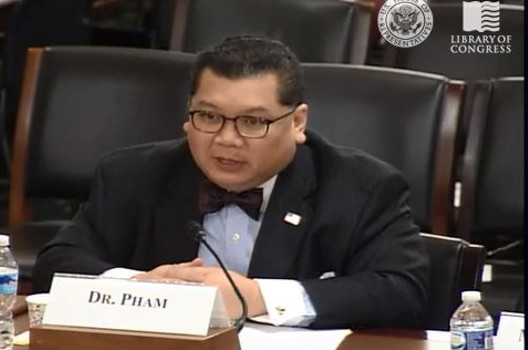 J. Peter Pham, Director of the Atlantic Council’s Africa Center, testified at a House of Representatives Committee on Homeland Security hearing, “Terrorism in Africa: The Imminent Threat to the United States.”

According to Pham, there is a recurring trope that emerges time and again: terrorism in Africa generally gets short shrift and, when attention is focused on specific groups or situations that appear to be emerging challenges, the threat is either dismissed entirely or minimized—until tragedy strikes. Yet, dating back to at least the period when Osama bin Laden himself found refuge in Sudan, the leading strategists of Islamist terrorism have speculated about the potential opportunities to establish cells, recruit members, obtain financing, and find safe haven offered by the weak governance capacities and other vulnerabilities of African states.

In his testimony, Pham noted that time and again, the mistake has been made to underestimate the threat faced by terrorism in Africa. He attributed part of this to an analytical bias to limit future possibilities to extrapolations from the past, a hermeneutical choice which ignores the dynamic potential which many terrorist organizations have exhibited. Another part of the explanation is even more basic: the sheer lack of resources for Africa-related intelligence and analysis across the whole of the US government.

As America’s relationships—diplomatic, security, economic, and cultural—with Africa as a whole and the individual countries on the continent expand and deepen—a positive development to be sure—an unfortunate downside is that the potential risk to US persons and interests as well as to the homeland necessarily increases.

Quite simply, Pham argued, threats to the homeland and to US citizens and interests abroad exist and, by its very nature, more engagement also increases exposure and vulnerability.

Pham urged policymakers not to curtail engagement with African partners, but to ensure that adequate resources are mustered to cope with and meet the rising demand for intelligence about and security against threats originating in Africa.

Also testifying at the hearing, organized by the Subcommittee on Counterterrorism and Intelligence, was Thomas Joscelyn, Senior Fellow at the Foundation for Defense of Democracies, and Daniel Byman, Research Director and Senior Fellow at the Brookings Institution’s Center for Middle East Policy. Read J. Peter Pham’s prepared testimony here.