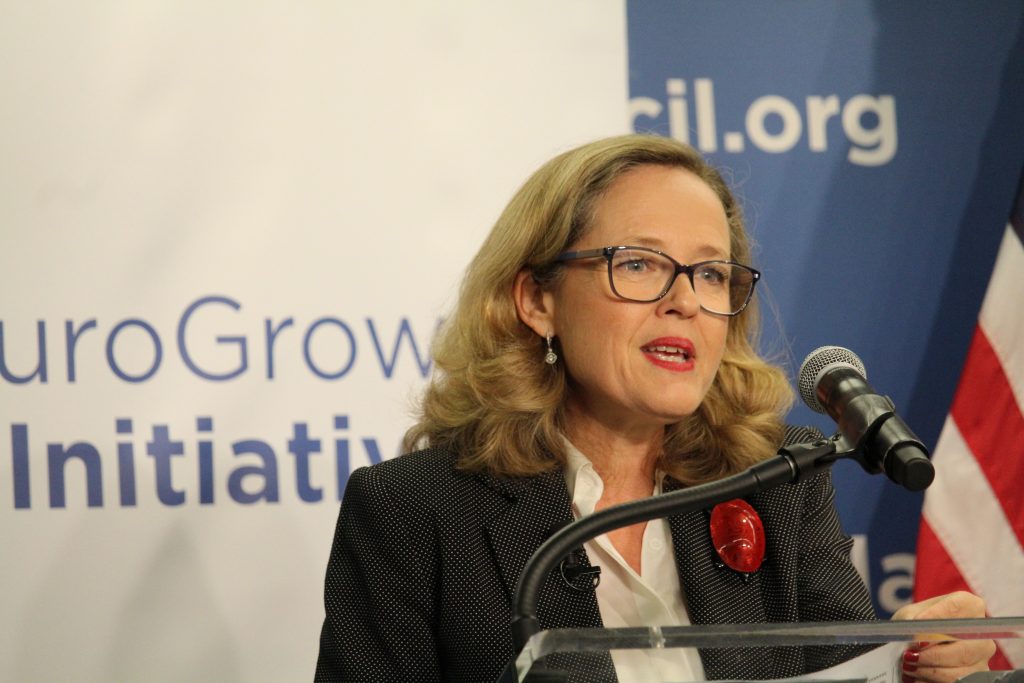 Minister Calviño began her remarks by addressing the current state of the Spanish economy. Spain’s economy has averaged 2.5% growth for the last five years. Despite the global slowdown, forecasts indicate that Spain will continue to grow and outperform its European peers. The Minister attributed the expansion’s resilience to two key elements. First, government has implemented reforms to restructure the domestic economy to balance production. Secondly, the 2007 crisis forced Spanish businesses to become more competitive, by being more nimble and diversifying their demand portfolio.

The Spanish economy, however, continues to face imbalances which require immediate attention. Unemployment, especially structural unemployment and youth unemployment, remain high. High levels of public debt also pose threats to national expansion, slowing productivity growth and potential GDP growth. Since 2014, decreasing public debt has been a top priority, but progress has been slow. The 2007 crisis widened inequality gaps in multiple sectors, which need to be corrected to allow for sustainable growth.

According to Calviño, the key to correcting these imbalances is increasing the economy’s potential growth rate. Since her term began, she has introduced a three-pronged strategy to target the rate of expansion. The strategy highlights fiscal discipline, focusing on investment and social cohesion and targeting structural reforms. Financial markets have already expressed growing confidence in the Spanish economy since her government has implemented improvements. To support a continued expansion, it is important to preserve this trust and continue to increase responsible fiscal management.

The Minister reflected on key factors dampening the global growth outlook including trade tensions, difficulties in large emerging economies and Brexit. Minister Calviño stressed the importance of avoiding an escalation of EU-US trade tensions. She added that the EU is looking to reach a negotiated solution with respect to WTO’s Boeing – Airbus ruling on illegal state subsidies. Calviño also commented on Brexit, stating that the “prolongation of uncertainty is the materialization of the risk. There is a common misconception that if there is a threat, but it doesn’t occur, it means there is not damage. But the damage is done with the threat. The uncertainty is clearly having a negative effect on global growth.”

These tensions and uncertainties underscore the need for EU backstops to protect against future crises. The Minister pointed out that the EU Commission has created a budgetary instrument for convergence and competitiveness, a European deposits insurance system has remained a top priority and von de Leyen has signaled that the common unemployment insurance mechanism is among her top priorities. Calviño called the steps important strides in the effort to safeguard the zone.

The Minister closed with a reminder that global challenges must be tackled by a united front. Countries should address key challenges, such as climate change, in a joint effort rather than getting embroiled in conflicts with one another.

If you missed the event, you can watch the webcast below.