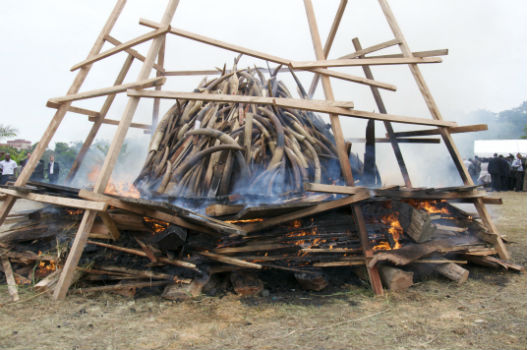 Across Africa, trafficking is on the rise. Boko Haram’s kidnapping and sale of some of the 276 Chibok schoolgirls into slavery, Guinea-Bissau regressing into a “narco state,” and rebels loyal to the Mozambican National Resistance using poaching to sustain their fledgling movement are several examples in recent memory. These crimes are not isolated incidents. Rather, they all concern conflict, security, and governance and unite under a single banner: human, drug, and wildlife trafficking that is thriving off—and promoting—instability in Africa.

A new Atlantic Council report draws attention to illicit trafficking’s lofty profits. They make up part of the $50 billion—just slightly over Tanzania’s gross domestic product (GDP) in 2016—that African governments lose in illicit financial flows per year. Trafficking far outpaces the earning potential of local security forces and law enforcement, sowing the seeds of corruption and undermining efforts to eliminate bribery and illicit trading. The same report notes that both terrorist groups and organized crime syndicates are accruing substantial profit from trafficking and using those profits to spoil peace efforts and perpetuate insecurity in their respective regions.

Broadly speaking, progress in eliminating human trafficking is not promising. The global human trafficking problem has risen to the forefront of policy conversations, as the world has seen over 1 million refugees and migrants flee conflict zones and attempt to cross the Mediterranean since 2015. Hundreds of thousands of people enter Europe illegally every year, often departing from Libya’s coast, where ungoverned spaces have allowed brutal human traffickers and smugglers to operate freely and with impunity. Despite greater engagement from Europe, weak governance in African countries means that African migrants, refugees, and asylum seekers are not well protected by their own governments—twelve African countries are on Tier 3 of the US’ Trafficking Victims Protection Act, meaning they do not meet the minimum standards to eliminate trafficking and are not making efforts to do so.

In the mid-2000s, Guinea-Bissau became the world’s first “narco-state,” or a country whose economy is dependent entirely on the illicit drug trade. In 2012, the United States estimated that 30 tons of cocaine pass through Guinea-Bissau per year, accounting for almost 13 percent of the country’s GDP. The drug trade was a key driver of corruption in Guinea-Bissau, as government officials at the highest levels have become involved in the movement of illicit drugs. In a show of the problem’s severity, the United States went as far as indicting Guinea-Bissau’s army chief of staff and its former navy chief for facilitating the transport of cocaine into the United States. Unfortunately, the illegal drug trade is not isolated to Guinea-Bissau or even West Africa—the Tanzanian archipelago of Zanzibar has become a major mid-point in the rising global heroin trade between Afghanistan and greater Europe. This has had domestic implications on the island, with an increase in local heroin abuse likely stemming from the greater supply in-country.

The trafficking of wildlife products, estimated to be worth at least $19 billion per year globally, is not merely an environmental or conservation concern. It entails both a loss of conservation-based revenues for economies that depend on tourism and an increase in profits for criminal groups facilitating this illicit trade, both of which are fueling instability—directly and indirectly— on the continent. According to a new report by  the Enough Project, elephant ivory sells for up to $250 per kilogram on the Ugandan black market; in 2013, rhino horns in Vietnam and China sold for upwards of $80,000 per kilogram. The math explains the appeal of poaching—just one illicit transaction could accrue such profits that a poacher could live comfortably for years. Poachers are also often better armed, better organized, and more efficient than park rangers detailed to deter poaching, and linkages between organized crime syndicates and terrorist groups provide significant arms and infrastructure support that anti-poaching officials just do not have. Punishment for poaching and wildlife trafficking across the continent is generally weak in practice, with offenders being released without charges or forced to pay small fines relative to damage done.

There is increasing recognition that trafficking fuels conflicts and undermines peace efforts. The Obama Administration recognized this in its 2012 US Strategy Toward Sub-Saharan Africa, calling the illegal wildlife trade “an international crisis.” In the past, the United States has invested in building partner capacity by conducting anti-poaching training exercises for Gabonese park rangers. These same rangers went on to stop a heavily armed gang of poachers from killing forest elephants in 2013. That training cost $78,000 and is an example of how the United States can spend a moderate sum and create sustained anti-poaching abilities in our partner’s militaries. Several non-governmental foundations, including the Clinton Global Initiative, have also created anti-poaching and conservation programs.

Although promising, private philanthropy cannot fill the void left by poor governance that enables trafficking—but neither can the United States alone. With the many issues facing African governments today, states cannot afford to put trafficking on the back burner behind “traditional” security concerns. While there is no cure-all in the short term, governments can start by adhering to standards outlined in the Trafficking Victims Protection Act, such as criminalizing human trafficking and enacting harsh punishments for human traffickers. Creating—and enforcing—harsh penalties for trafficking drugs and wildlife products will change the status quo of impunity for poachers and traffickers and raise the risk of committing those crimes. Looking ahead, there will be no substitute for job creation and income generation, which would dissuade people from turning to trafficking for income and reduce the supply of trafficked individuals by providing better economic opportunities.

Liviya David was an intern with the Africa Center.