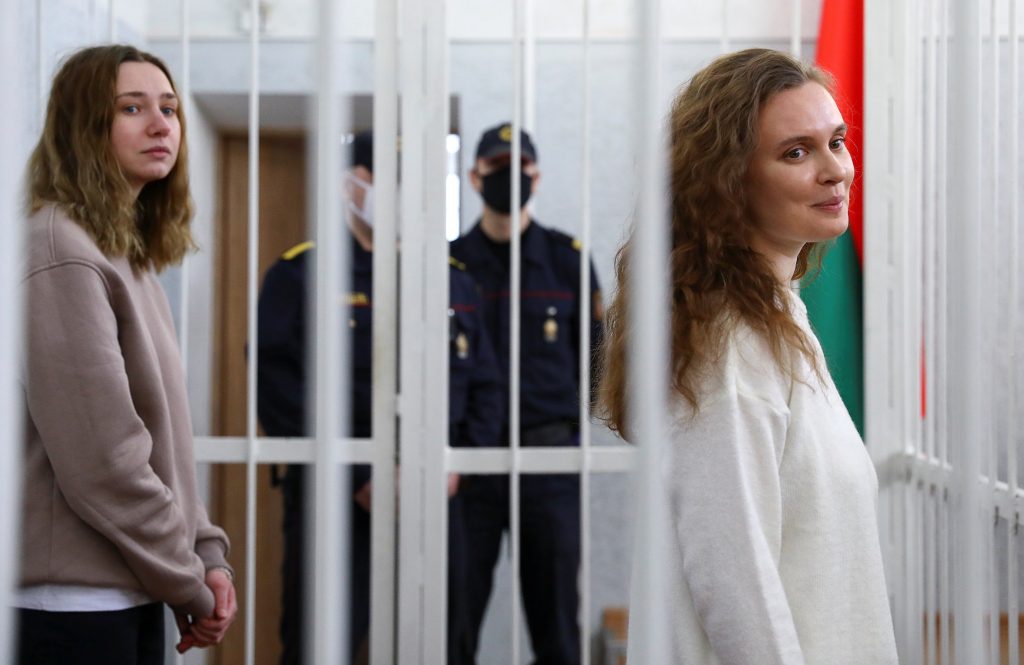 A Minsk court sentenced journalists Katsiaryna Andreyeva and Darya Chultsovato two years in prison on February 18 in a case that highlights the war against free speech that is accompanying Belarus dictator Alyaksandr Lukashenka’s ruthless crackdown on the country’s six-month pro-democracy uprising.

The two young journalists, who both work for the Polish-backed independent Belarusian TV channel Belsat, were convicted on charges of “organizing a demonstration that grossly violates public order.” However, critics of the verdict maintain the journalists were guilty of nothing more than live streaming a peaceful protest staged to commemorate activist Raman Bandarenka, whose death in November 2020 was widely believed to be the result of regime brutality.

After months spent in custody, the two journalists were finally brought to court this week. Both protested their innocence. “I want to devote all my energy to the creation of a new Belarus without political repression. I demand an acquittal for myself, for my colleagues, and for the hundreds of political prisoners,” Andreyeva commented in court.

There was little attempt to present a credible case against the pair. Instead, Belarusian state prosecutors argued that the live stream filmed by the defendants constituted a source of incitement that fueled “violent protests.” There was an air of inevitability about the subsequent two-year sentences.

The convictions provoked an immediate international reaction. US Senator Jim Risch, the ranking member of the Senate Foreign Relations Committee, tweeted, “It is shameful that dictator Lukashenka has jailed two journalists for the “crime” of filming protests against his fraudulent election in Belarus. These brave women, along with others detained, should be immediately released.”

Meanwhile, a statement from the European Union’s External Action Service noted that this latest incident was part of a far broader and increasingly alarming trend of repression in Belarus. “The unacceptable harassment of human rights defenders, media workers, trade union representatives, and defense lawyers has escalated in recent days,” the statement noted. “Yesterday, two Belsat journalists were sentenced to two years imprisonment on groundless charges. Other media workers are facing a similar fate. Such verdicts aim to intimidate and silence journalists and media workers who are simply doing their jobs, as well as to prevent factual information from reaching the Belarusian people and beyond.”

Also this week in Minsk, the trial began of another Belarusian journalist, Kaciaryna Barysevich, who is facing charges alongside Belarusian doctor Arciom Sarokin. Both are accused of exposing regime attempts to cover up the killing of activist Raman Bandarenka, with prosecutors bizarrely arguing that the publication of Bandarenka’s medical records constitutes a technical violation of Belarusian privacy laws. Human rights groups expect the trial to be just as farcical as the charges themselves.

Repressions against Belarus’s small independent media community have continued in parallel to these court proceedings. Earlier this week, multiple members of the Belarusian Association of Journalists were subjected to dawn raids, with plainclothes law enforcement officers conducting searches of their apartments and confiscating computer equipment.

The events of the past week represent the latest escalation in a long-running campaign against media professionals in Belarus. The Belarusian Association of Journalists claims that 97 of its members have been sentenced to a collective total of around 1,200 days in prison since the start of the country’s pro-democracy protest movement in August 2020. This number does not include the many more reporters and independent bloggers who have been detained over the past six months before being released without facing any official charges.

Nor are Andreyeva and Chultsova the only journalists to receive significant prison time. There are currently at least 11 Belarusian journalists imprisoned due to their professional activities, along with various bloggers who have incurred the displeasure of the regime.

The current challenges facing the media in Belarus are extreme, even by the draconian standards of the 26-year Lukashenka dictatorship. “The situation with press freedom in Belarus has always been hard and the regime has kept independent media in its crosshairs for years,” explains Minsk journalist and Atlantic Council Nonresident Fellow Hanna Liubakova. “However, when the protests began last summer, a very real and nasty war was unleashed against journalists and bloggers in Belarus.”

Liubakova argues that while the current efforts to silence the Belarusian opposition are alarming, they may ultimately prove futile. “Lukashenka and his government do not seem to understand that hiding the truth is impossible in today’s technological era,” she notes. “Ordinary citizens post videos or share them with the media. Others leak information or help out in different ways.”

This is unlikely to deter Lukashenka from continuing to target media professionals guilty of nothing more than attempting to do their jobs. Belarus is now by any measurement among the most dangerous countries in the region, and likely the entire world, for journalists. Indeed, I myself observed masked security men intimidating journalists by filming them during my own reporting from Minsk last summer. By all accounts, the situation has since deteriorated dramatically.

Many in Belarus are hoping that a robust international response to the latest prison sentences can still have a moderating effect on the authorities. “it is crucial to send a strong signal to the Belarusian regime and to Lukashenka personally that this will not be tolerated,” says Liubakova.

Soviet-style Belarus dictator goes back to the future