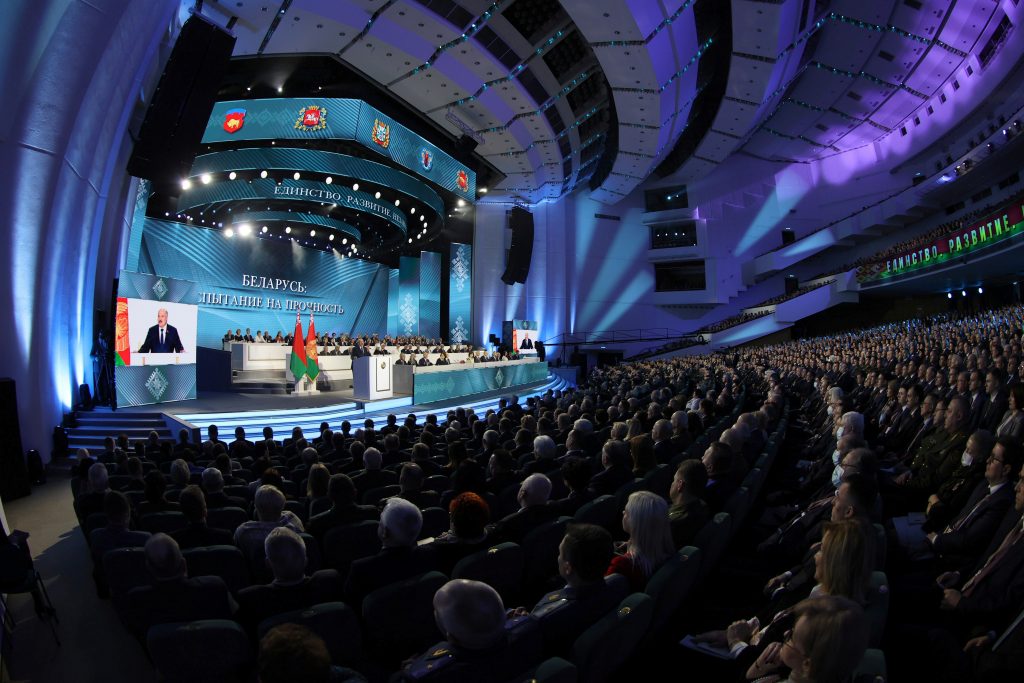 In keeping with the ossified spirit in which Europe’s very own hermit kingdom is run, the Republic of Belarus held its All-Belarusian People’s Assembly on February 11-12. The Assembly, held every five years, is a spiritual successor to the Soviet Congresses that the Communist Party of old would stage to renew its dubious political legitimacy and organize the next five-year plan.

That institution had played an important role in the administration of the USSR. Its revival in post-Soviet Belarus reflects dictator Alyaksandr Lukashenka’s desire to remain forever embalmed in a kitschy simulacrum of a vanished past. This was the sixth time the assembly had been held, and the political theater on display was on this occasion far more meaningful than ever. With Lukashenka’s regime under siege and the dictator’s 26-year reign threatened by unprecedented pro-democracy protests, this was an opportunity to put on a show of public defiance.

Over the two days of the assembly, 2,700 hundred delegates, or just half the usual number, gathered in the neoclassical Republican Palace in Minsk. In many ways, the proceedings resembled a nightmarish version of the Eurovision Song Contest held in North Korea.

Government-controlled labor union officials nominated the delegates, who represented a cross-section of those segments of the population still loyal to the regime. Under blue and purple strobe lights, the promising slogan “Unity! Development! Independence!” flashed in large white letters behind the stage. The relatively few women in attendance sported coiffured 1980s-style hairdos, while the ranks of men wore boxy 1990s suits or green Soviet-style military uniforms. This was certainly not a celebration of diversity.

Speaking at the assembly, Lukashenka sought to reclaim the leadership of the nation. He refused to concede any ground despite the more than six months of mass street protests that have roiled the country since a deeply flawed presidential election in August 2020. Instead, Lukashenka referred to the demonstrations as a “rebellion” coordinated by foreigners. “We must stand up to them no matter what,” he told delegates.

In reluctant recognition of the turbulent political climate in the country, Lukashenka repeated his earlier promises that a new Belarusian Constitution would be drafted by the end of this year and voted on in a national referendum during the first few months of 2022. Nevertheless, the underlying message from the assembly was unmistakable- nothing would be changing anytime soon and he has no intention of leaving the presidency. On the contrary, the Belarus dictator was signaling his complete rejection of the protest movement’s demands for a transition towards democracy. There will be no dialog.

Lukashenka’s retreat into the Soviet past has not been limited to the pageantry of carefully choreographed Soviet style assemblies. In his struggle to counter the ongoing anti-regime protests in Belarus, he has also adopted many of the most oppressive tactics of the Soviet police state.

The past half-year has seen an unexpected explosion of political resistance in the country that has been met by a brutal and unrelenting crackdown. Tens of thousands of Belarusians have been imprisoned amid widespread reports of torture and routine human rights abuses. With neither the regime nor the protesters able to achieve a decisive breakthrough, the situation has deteriorated into what most observers regard as a stalemate marked by ever-more innovative forms of protest and increasingly draconian security measures.

While the immediate threat of overthrow has receded, Lukashenka’s position remains far from secure. Since the current crisis began last August, the internationally isolated dictator has received vital backing and financial assistance from the Kremlin. However, Moscow appears to recognize that Lukashenka has outlived his political usefulness and is seeking to engineer a transition in Minsk on its own terms.

In response to increasingly urgent prodding from Russia, Lukashenka has made a series of empty pledges to eventually leave the presidency. Few are convinced. Indeed, the defiant tone of the recent assembly offered a far more credible indication of his true intentions and directly negated the timeline that he had previously set for his own departure.

Meanwhile, the domestic opposition continues to mobilize against the Lukashenka regime. Protesters are no longer able to stage large-scale rallies in major towns and cities, but have shifted the focus towards localized events within individual residential districts and flash mob-style gatherings that allow the opposition to keep the flame of resistance burning. Belarusian opposition leader in exile Sviatlana Tsikhanouskaya designated February 7 as an international Day of Solidarity with Belarus, with eye-catching events and expressions of solidarity held all over the world.

The democratic opposition is now gearing up for a projected March 25 relaunch of mass protests, with the date chosen to coincide with the anniversary of the 1918 declaration of independent during Belarus’s early twentieth century statehood bid. It remains to be seen whether Lukashenka’s recent show of force at the so-called People’s Assembly will deter potential protesters or encourage more Belarusians to take to the streets.

One thing is clear—the two sides in the current confrontation offer diametrically opposed visions for a future Belarus. Protesters aim to usher in a new era of democracy, while Lukashenka seeks to keep the country firmly anchored in the political realities of the Soviet past. With battle lines drawn, the next few months are likely to be among the most crucial in the country’s modern history. The outcome of the current crisis will shape Belarus for decades to come, and will doubtless cascade throughout the wider region.

Image: Back in the USSR? Belarus dictator Alyaksandr Lukashenka's recent People's Assembly was a Soviet-style affair designed to help him reclaim leadership of the country following six months of nationwide pro-democracy protests. (Maxim Guchek/BelTA/Handout via REUTERS)