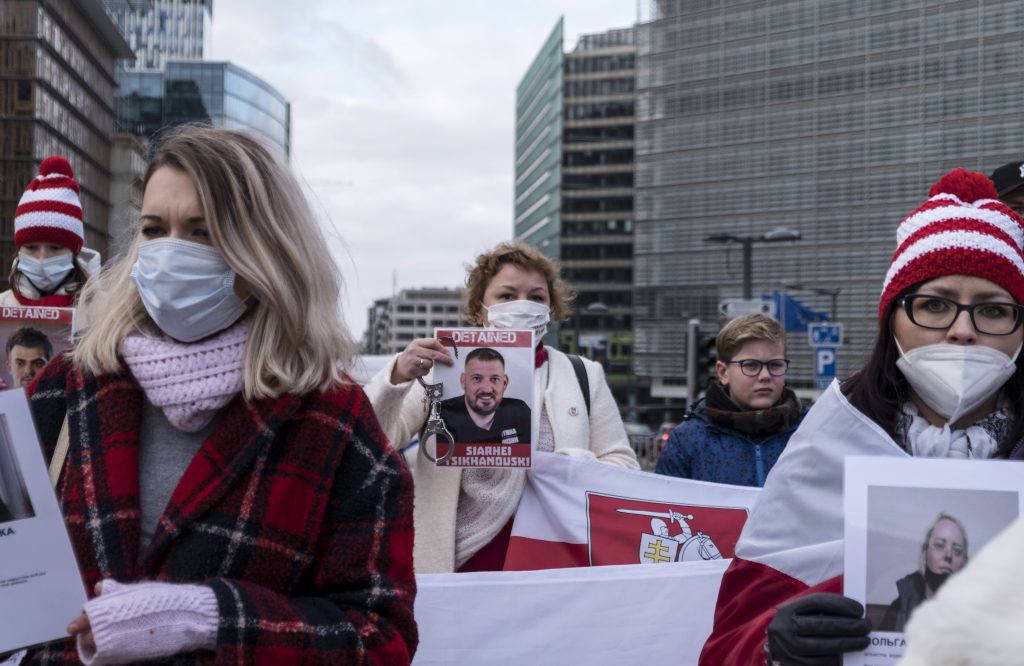 The International Ice Hockey Federation’s decision to move this year’s world championship from Belarus despite a personal appeal from Alyaksandr Lukashenka not to do so is just the latest sign of the Belarusian strongman’s isolation.

Examples of Lukashenka’s ostracization have been mounting since August 2020, when he launched a brutal crackdown against pro-democracy demonstrators protesting an election that the opposition and much of the international community believe was rigged.

In December 2020, the International Olympic Committee banned him from attending the next Olympic Games. And the United States, the United Kingdom, and the European Union have all imposed sanctions.

As Western countries and the international community move quickly to punish Lukashenka, they are also embracing the Belarusian opposition and civil society like never before. Opposition candidate Sviatlana Tsikhanouskaya has been greeted in the West like a head of state in exile. She has addressed the Parliamentary Assembly of the Council of Europe and has been invited to speak before the UN General Assembly.

The outright shunning of Lukashenka by the West, coupled with the warm embrace of Tsikhanouskaya, are emblematic of the tectonic shift that has taken place over the past five months in Belarus’s geopolitical stature and the changing policy calculus surrounding it.

Prior to August 2020, Belarus was akin to a frozen conflict in the struggle between Russia and the West for influence in the former Soviet space. Neither side were entirely happy with the situation in Belarus but neither were entirely unhappy. And both were reluctant to rock the boat.

The West bristled at Lukashenka’s dismal record on human rights and democratic norms. But since Russia’s forceful and illegal annexation of Crimea in 2014, the Belarusian strongman was also geopolitically useful for the Western democracies.

In the wake of Russian aggression in Ukraine, Lukashenka sought to distance himself from Moscow and to present himself to the West as a check on Russia’s imperial ambitions. He refused to allow Russian troops to be permanently stationed on Belarusian territory, rejected the Kremlin’s demands for a closer union state, and pledged that his country would not be used as a staging ground for an attack on any third country.

For his part, Russian leader Vladimir Putin is widely believed to detest Lukashenka personally and would have preferred a more pliant figure in his place. In recent years, the Kremlin has been angered by Lukashenka’s refusal to allow a new Russian airbase on Belarusian territory, his support for the pro-Western government in Ukraine, and his rejection of Moscow’s concept of the so-called “Russian World.” However, Lukashenka remained just loyal enough to make the risks and costs of replacing him outweigh the benefits.

Since August 2020, the previously frozen struggle for Belarus has heated up spectacularly and the country is now very much in play. Lukashenka’s post-election crackdown has foreclosed on any overtures to the West and forced him closer into Moscow’s grip.

The redrawing of the geopolitical battle lines in Belarus, with Russia firmly backing an unpopular dictator and the West embracing a resurgent opposition and civil society, opens a window of opportunity for the United States and its allies. However, it also poses considerable risks.

In Congressional testimony before the US Helsinki Commission in November 2019, I argued that “given the high priority Moscow places on keeping Minsk as a client, Russia clearly has escalation dominance in Belarus. But this does not mean the United States and its allies are helpless.”

Then, as now, the West needs to thread a very difficult needle in Belarus and it needs to play a long game.

The United States and its allies must take steps to help make Belarus less dependent on Russia economically, such as helping develop its fledgling high-tech sector. This would have the added benefit of changing the political environment and potentially laying the groundwork for a more pluralistic system in the future.

Additionally, as the first generation born in an independent Belarus comes of age, the West can also intensify cooperation with civil society and media. In the face of intensifying Russian disinformation campaigns claiming that Belarus is nothing but a part of Russia, this would help shore up the Belarusian sense of nationhood and make the country more indigestible in the event of Russian aggression.

This is similar to the strategy the United States and its allies employed successfully in Georgia and Ukraine in the 1990s, where years of work with civil society and the private sector ultimately paid massive dividends in terms of goodwill and soft power.

The West also needs to be mindful of the pivotal role Belarus plays in European security.

Bordering NATO members Latvia, Lithuania, and Poland as well as Ukraine, Belarus looms large in any Russian war plan against the West. It would be an essential element in efforts by Moscow to seal the Suwalki Corridor and cut off the Baltic states from the Atlantic alliance. It would provide a platform from which Moscow could threaten NATO’s eastern flank.

The United States and its allies need to send clear and unambiguous signals to Moscow that any effort to violate Belarusian sovereignty, either through outright aggression or an attempt to install a satellite government through subterfuge, would incur costs including, but not limited to, additional sanctions.

In shunning Lukashenka and embracing Tsikhanouskaya and the opposition, the West is on the right side of history in Belarus. It must now make sure that it stays there.

Image: People protest against human rights violations in Belarus near the European Union headquarters in Brussels on January 17, 2021. (Photograph by Valeria Mongelli/Hans Lucas via REUTERS)