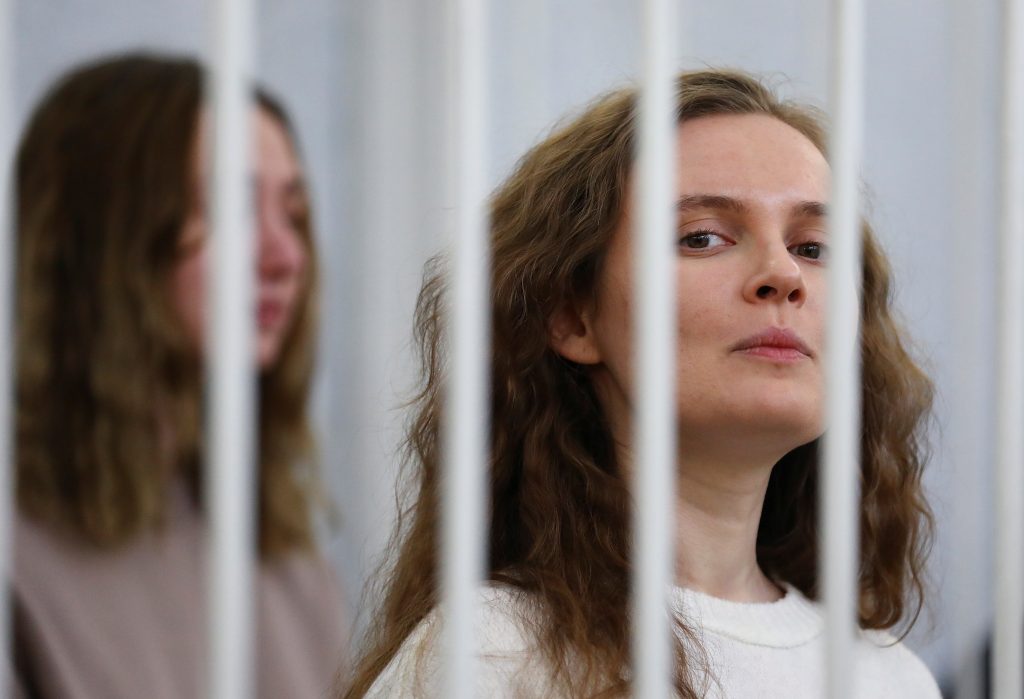 Belarusian opposition leader Sviatlana Tsikhanouskaya issued an emotional plea on March 15 for five jailed Belarusians to call off their hunger strikes. “Please stop your hunger strikes. Your lives are the most precious thing for Belarus. My team and I will do everything possible to approach the day when you can walk freely with your loved ones in a new Belarus,” she declared in a video address.

Tsikhanouskaya’s appeal reflects mounting concerns over the plight of the hundreds of detainees currently being held by the regime of Belarus strongman Alyaksandr Lukashenka. These political prisoners were arrested in the course of a merciless crackdown by security services against a pro-democracy protest movement that first arose seven months ago. Although exact numbers have yet to be confirmed, human rights groups believe that almost 300 Belarusians are currently incarcerated as political prisoners of the regime.

Both the US and the European Union have repeatedly condemned the crackdown as well as the unlawful and politically motivated detention of activists, trade union members, political figures, bloggers, and journalists. In total, over thirty thousand Belarusians are believed to have been taken into custody since protests first erupted in the country in the immediate aftermath of the August 9, 2020 presidential election. Belarus is now the site of what is almost certainly Europe’s largest organized campaign of political repression since the end of the Cold War.

In a March 15 statement to the UN Human Rights Council, Amnesty International condemned the Lukashenka regime’s ongoing crackdown. “Hundreds of opposition figures, human rights defenders, journalists, and others expressing dissenting opinions continue to be detained on trumped-up charges or sentenced to prison terms following unfair trials in order to obstruct them from carrying out their work, including the documentation of human rights violations,” the statement noted. Meanwhile, in February 2021, senior United Nations human rights official Michelle Bachelet warned of a “human rights crisis of unprecedented dimension in Belarus.”

The hundreds of political prisoners currently being held in Belarus come from a variety of backgrounds and represent a broad cross section of Belarusian society. They are united by accusations of involvement in a grassroots and non-violent movement to end the country’s 26-year dictatorship and transition towards a more democratic system of government.

Protests have flared sporadically throughout the more than two and a half decades of Lukashenka’s reign, but he has never previously faced a challenge as consolidated or robust as the current nationwide opposition movement, which arose following last summer’s deeply flawed presidential vote. With public discontent already rising due to economic stagnation and the regime’s bungled handling of the coronavirus pandemic, attempts to falsify the election outcome proved to be the last straw and provoked an emphatic response.

Since protests began in August, the regime has responded with waves of escalating violence and terror tactics. Alongside the tens of thousands who have been temporarily detained and the hundreds still languishing in Belarusian prisons, many more have fled the country to avoid further persecution. The list of exiles includes Belarusian opposition leader Sviatlana Tsikhanouskaya herself.

Journalists and bloggers have been especially hard hit by the crackdown, with arrests beginning in the run-up to the August presidential election, well before the outbreak of mass anti-regime protests. Many of those who have emerged from custody have recounted their experiences of systematic human rights abuses and torture.

Numerous individual accounts from Minsk and other cities across Belarus provide a window into the dire conditions and psychological pressures facing the country’s political prisoners. “Belarusian blogger Siarhei Piatrukhin cut his veins in prison. His lawyer states the reason was that Siarhei could not handle the horrible sanitary conditions in his cell. For having done so, he was placed into a punishment cell,” recounts Franak Viačorka, a Belarusian journalist and Nonresident Fellow at the Atlantic Council who is currently a Senior Advisor to Sviatlana Tsikhanouskaya.

“The situation is psychologically very difficult for political prisoners and they are experiencing mental duress, having spent months behind bars without much investigative work with their involvement,” added Katia Glod, a Nonresident Fellow at CEPA.

According to human rights groups, prisoners are often placed in cells together with patients suffering from COVID-19 or other diseases. They are routinely denied access to even the most rudimentary healthcare. “The jailing process does not merely violate the human rights of political prisoners. These actions are taken by the prison authorities and security services precisely for the sake of breaking the spirit of the protesters and journalists,” says Belarusian journalist and Atlantic Council Nonresident Fellow Hanna Liubakova.

Tsikhanouskaya is now actively lobbying Western governments and human rights bodies to take action. She remains hopeful that a strong international reaction could still constrain the Lukashenka regime. In her recent address to Belarusian political prisoners, the opposition leader claimed that the UN may launch a mechanism to hold those accountable for illegal detentions as soon as next week. “But I don’t know if you still have a week,” she noted.