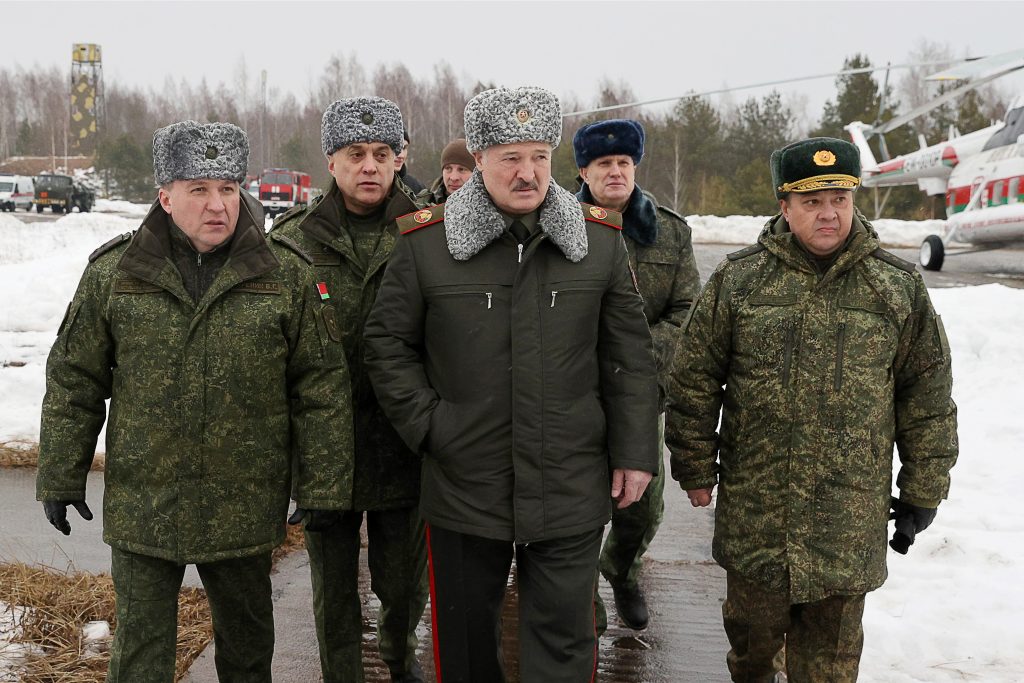 Alyaksandr Lukashenka has turned Belarus into a staging area for Vladimir Putin’s war of aggression against Ukraine. Russian military supplies are flowing by rail and road into Ukraine via the country’s northern frontier with Belarus, while missiles are raining down on Ukrainian cities from across the Belarusian border.

Until recently, it was widely expected that Belarusian troops would also be joining Russian forces in the invasion. However, there are signs of a rebellion within the ranks of the Belarusian military.

According to Viačorka, “there is a high degree of demoralization” among both officers and conscripts. He claimed that many “are fleeing the country’s borders en masse to any destination possible.” Viačorka added, “We have seen growing pressure from commanders of military units not to intervene in the fighting in Ukraine. There are officers who took sick leave and others who have asked to end their contracts with the military.”

As a result of this opposition, Viačorka reported that Belarusian units have yet to enter Ukrainian territory and units stationed adjacent to the border with Ukraine have been returned to their bases. “It seems the decision to involve the Belarusian military in fighting was changed as a result of pressure from top brass and the refusal by soldiers to fight,” he claimed.

Opposition news site Charter 97 is reporting that most of the rank and file in the Belarusian armed forces “do not participate in ground military operations against Ukraine.” According to the report, senior officers are telling the General Staff that if Belarusian forces enter Ukraine “the lives of the officers will be in great danger, because the soldiers will take up arms against them.”

These reports cannot be independently confirmed. But they are consistent with an appeal made by Tsikhanouskaya to the Belarusian military in a video she released on Twitter on March 2. “Now we must all make our choice,” Tsikhanouskaya said in an address aimed at Belarusian soldiers. “Do not follow illegal orders. Change sides and join the Ukrainian troops.”

In addition to resistance from within the Belarusian army, Israel Hayon reports that “many Belarusian fighters, the equivalent of around five military units, have joined the Ukrainians to fight against the Russians.” Reports of Belarusian units fighting on the Ukrainian side have been appearing on social media throughout the past week.

One of these volunteers, 26-year-old Jan Derbeiko, told MarketWatch that he was forced to flee Belarus for Ukraine in November 2020 after participating in demonstrations against Lukashenka’s autocratic regime.

“I had a job and I had plans for the future. But the war happened here,” Derbeiko said. “At that moment, I decided to stay here. I’ve already lost my homeland, and now my new home is being destroyed.”

The unit he joined is preparing to defend Kyiv from Russian assault. Derbeiko called on all Belarusians “who have [any] conscience and honor left” to provide “maximum support to the Ukrainians.”

Putin’s brutal invasion of Ukraine is having unexpected consequences and blowback in more ways than the Russian ruler could have imagined. It has united Ukrainians like in no time since independence. It has consolidated the West in ways that would have been unimaginable just weeks ago.

The war has also sparked widespread protests in Russia in the face of mounting repression. And despite Russia’s de facto soft annexation of Belarus, it appears to have sparked a revolt in that country’s armed forces.

For weeks, military analysts have been speculating about whether and when Belarusian troops will join Russia’s invasion of Ukraine. But at this point, it would seem that the only Belarusian forces currently active in the war zone are actually fighting on the Ukrainian side against Russia.

Russian President Vladimir Putin’s full-scale invasion of Ukraine has sparked the biggest European conflict since WWII and is now fueling a growing anti-war protest mood in both Russia and Belarus.