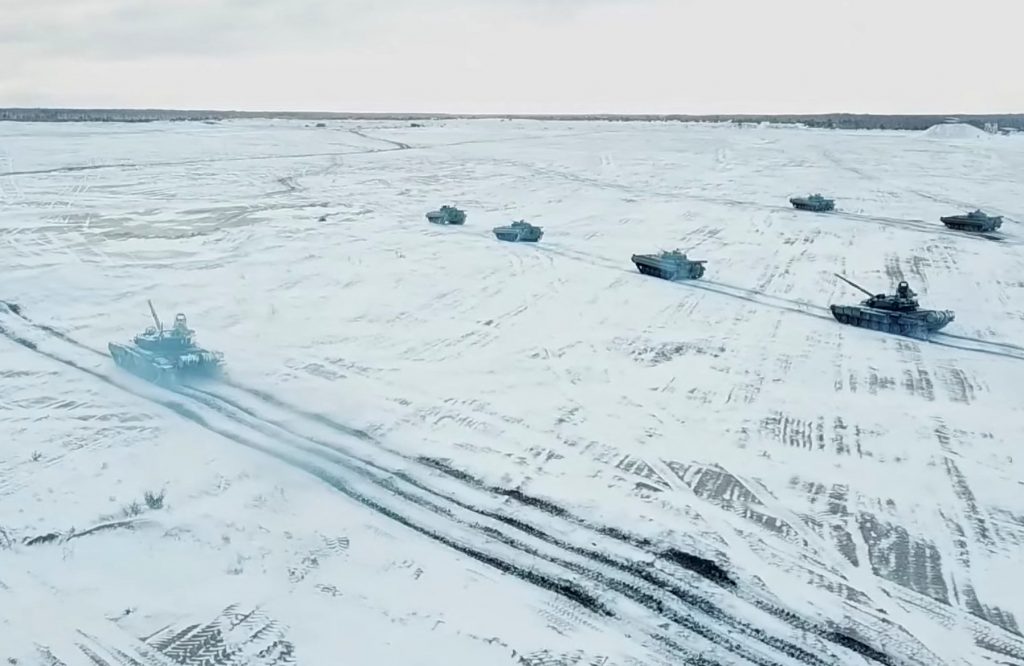 Alyaksandr Lukashenka is ready to go to war, or so he says.

Lukashenka spoke as Russian troops continued to pour into Belarus, with many taking up positions along the country’s 1000km southern border with Ukraine.

Speaking at the United Nations Security Council on January 31, US Ambassador Linda Thomas-Greenfield noted that Russia has already moved nearly 5,000 troops into Belarus together with short-range ballistic missiles, special forces, and anti-aircraft batteries. “We’ve seen evidence that Russia intends to expand that presence to more than 30,000 troops near the Belarus-Ukraine border, less than two hours north of Kyiv, by early February,” she said.

The change in Belarus’s geopolitical status over the past 18 months represents one of the most dramatic shifts in the security calculus in Eastern Europe since Russia’s illegal 2014 annexation of Crimea, and perhaps since the end of the Cold War.

The changed security equation is highlighted by Russia’s current brinkmanship on the Ukrainian border, giving Moscow the ability to encircle and attack Ukraine from the north, east, and south. It also means the Russian military is now poised on the Belarusian border with Ukraine less than two hours away from Kyiv.

Lukashenka’s eager participation in Putin’s encirclement of Ukraine and his confrontational stance are relatively new phenomenons that provide part of the explanation for the Kremlin leader’s own decision to take such an aggressive posture at this moment.

Following the Russian annexation of Crimea and armed intervention in eastern Ukraine’s Donbas region in 2014, Lukashenka made clear that he dismissed Putin’s idea of Belarus being part of a so-called “Russian World.” He also stated that he would not allow Belarusian territory to be used to attack a third party and maintained good relations with the pro-Western leadership in Ukraine while trying to keep the door open to better relations with the West.

For years, Lukashenka resisted Kremlin efforts to build a new Russian airbase in Belarus. And during the Zapad-2017 joint military exercises with Russia, he bent over backwards to reassure Belarus’s European neighbors that the drills would not be used as a pretext for aggression.

As I testified before the US Helsinki Commission in November 2019, Lukashenka was “not interested in sacrificing Belarusian sovereignty” and he had “little to gain from a military showdown or standoff with the West in which his country would be on the front line.”

Just over two years later, he is clearly on the geopolitical front line and seems to be relishing it. Belarus’s disputed August 2020 presidential election, the massive street protests it sparked, and Lukashenka’s ensuing brutal crackdown on dissent led the dictator in Minsk to conclude that his only chance of political survival was to embrace Putin as tightly as possible.

Embracing Putin for one’s survival does not come free. One of the costs of Putin’s bailout is Belarus becoming a platform for the Russian military.

In recent months, Lukashenka has recognized Moscow’s annexation of Crimea, made it explicit that he would support Russia in a war with Ukraine, offered to host Russian nuclear weapons, and acquiesced to regular military exercises and troop rotations that amount to a permanent Russian military presence in Belarus. Lukashenka has also agreed to host a joint military training center in Hrodna near the Belarusian border with Poland and Lithuania which will effectively serve as a Russian military base.

As Gustav Gressel and Pavel Slunkin note in a recent article for the European Council on Foreign Relations, Lukashenka has recently agreed to grant Russia nearly unlimited use of four airbases, a surface-to-air missile base, and approximately 30 storage sites on Belarusian territory. “Before August 2020, Belarus strictly limited Russia’s use of these sites to scheduled maneuvers. But this changed thanks to the collapse of Lukashenka’s legitimacy and his growing need for Russian assistance, which provided Moscow with the opportunity to use these facilities almost as it wished,” they wrote.

The most immediate effect of Belarus’s changed geopolitical position and Russia’s militarization of its territory can be seen in the current crisis that Moscow is provoking on Ukraine’s borders. With Belarus as a platform, Russia can now attack from multiple vectors, spread out Ukraine’s defenses, and more easily encircle Kyiv.

But as Gressel and Slunkin note, “one can expect Moscow to maintain a certain level of military presence in Belarus after the current crisis.” They add that “regardless of whether Russia invades Ukraine again, Belarus’s territory will increasingly become a source of military threats to all its western neighbors, not just Ukraine.”

The security calculus in Eastern Europe is dramatically more disturbing today than it was just 18 months ago. This poses a threat all of Belarus’s non-Russian neighbors including NATO members Latvia, Lithuania, and Poland as well as Ukraine.

Has Lukashenka’s anti-NATO gambit paid off with Putin?

Belarus dictator Alyaksandr Lukashenka’s decision to abandon years of geopolitical neutrality and join Vladimir Putin’s hybrid war against the West may have succeeded in convincing the Kremlin to keep him in position.

Image: Tanks pictured during joint exercises of the armed forces of Russia and Belarus. February 2, 2022. (Russian Defense Ministry/Handout via REUTERS)