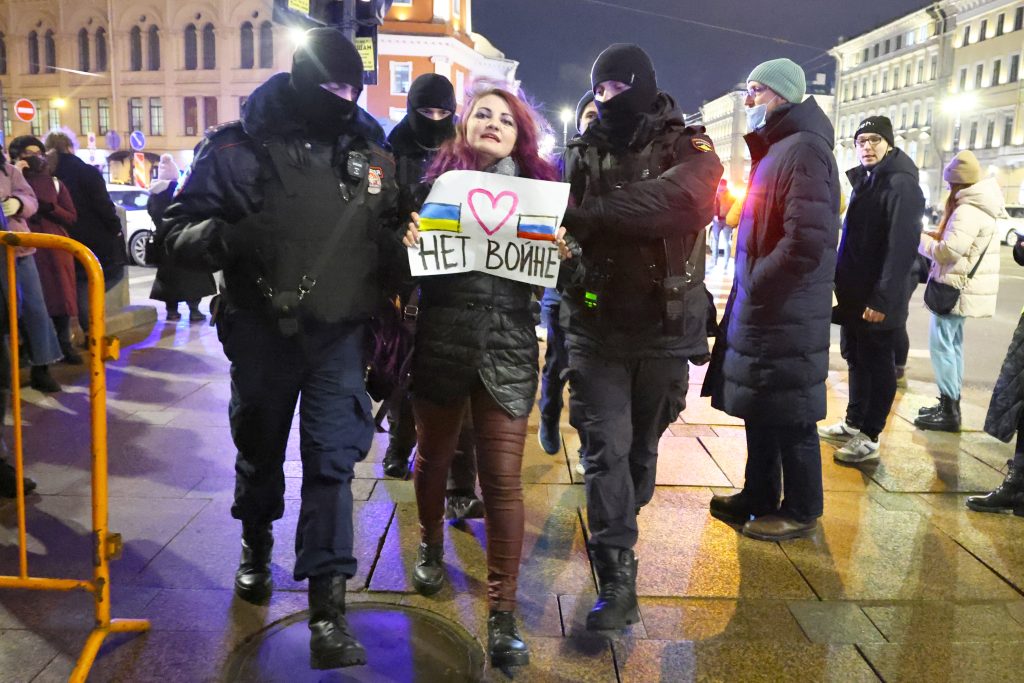 The contrast could not have been sharper. On one hand, there was the autocratic Belarusian ruler Alyaksandr Lukashenka warning that the Western response to Russia’s invasion of Ukraine was pushing Moscow “toward a Third World War.”

Lukashenka’s remarks came shortly after a widely criticized referendum that, in addition to allowing him to stay in power until 2035, sheds Belarus’s status as a nuclear-free country, opening the door for Vladimir Putin to deploy nuclear weapons there. His statement also came just days after Putin put Russia’s nuclear forces on high alert in response to Western sanctions and what he called “aggressive statements” by NATO.

And then there was Sviatlana Tsihanouskaya. As the Putin-Lukashenka axis of unhinged autocrats engaged in tag-team nuclear blackmail, the exiled Belarusian opposition leader was the picture of calm dignity, moral clarity, and steely resolve.

In a video posted on Twitter on March 1, Tsihanouskaya showed us the other Belarus. Wearing a t-shirt reading “Long Live Belarus” and “Glory to Ukraine’,” Tsihanouskaya assailed Lukashenka for joining Putin’s “illegal, immoral, and unprovoked invasion of Ukraine” and for “turning our country into a huge aircraft carrier for this terrible war against our brotherly neighbor.” She added that “the overwhelming majority of Belarusians do not want this war,” stressing that “we do not want to be complicit in this horrendous crime against our neighbor.”

Declaring that “now we must all make our choice,” Tsihanouskaya told Belarusian soldiers who were deployed to Ukraine “do not follow illegal orders. Change sides and join the Ukrainian troops.”

She praised the Belarusian volunteers who have formed units to resist Russia’s aggression alongside the Ukrainians. She applauded the Belarusian hacker collective called the Cyber Partisans, who have twice hacked the country’s rail system in an effort to disrupt Russian troops moving into Ukraine. And she commended the Belarusians at home who risked arrest or worse to come out in cities across the country to protest the war.

This split-screen moment starkly illustrates the two faces of Belarus: The official face personified by its mercurial dictator who has mortgaged his nation’s sovereignty to Putin in order to preserve his own grip on power, and a rapidly changing and increasingly assertive Belarusian society that is looking west for inspiration and wants no part in Putin’s war of Soviet restoration.

It also illustrates an asymmetry that is becoming evident. As it fights for its independence and defends its democracy, Ukraine is more united than at any time since independence. And faced with Putin launching the largest land war in Europe since World War II, the long-polarized West is showing remarkable and unexpected cohesion in opposing him.

The same cannot be said for Russia and Belarus, where many are confused, bewildered, and angered by Putin’s war of aggression and Lukashenka’s slavish complicity in this brazen crime.

In addition to the Belarusian anti-war demonstrations Tsihanouskaya referenced, thousands of Russians have been arrested in protests that have sprung up across the country.

Some Russian troops in Ukraine, suffering from low morale and shortages of food and fuel, have sabotaged their own vehicles or surrendered en masse to avoid fighting, The New York Times reported citing a senior Pentagon official. Given this, Tsihanouskaya’s call for Belarusian troops to switch sides and fight with the Ukrainians does not seem entirely far-fetched.

This opposition is only going to intensify as the pain from Western sanctions becomes more acute and as the deepening isolation of both countries becomes more evident. In a recent article, the prominent Belarusian journalist Iryna Khalip captured the mood of many who are increasingly realizing that they are now living in pariah states.

“We are to blame for allowing two insane usurpers to not only make Kafka a reality but also to turn Orwell into a documentary,” she wrote. “And now is the time to correct our own mistakes and finally take the country into our own hands, before midnight strikes and we all turn into pumpkins.”

As the Ukrainian armed forces and its citizens bravely defend their country’s independence in the face of Putin’s onslaught, a rearguard action appears to be underway in both Russia and Belarus by citizens who want no part in Putin’s criminal war.

Image: Police detain a demonstrator holding a sign with a message reading "No To War" during an unsanctioned anti-war protest in central St Petersburg. (Peter Kovalev/TASS via REUTERS)