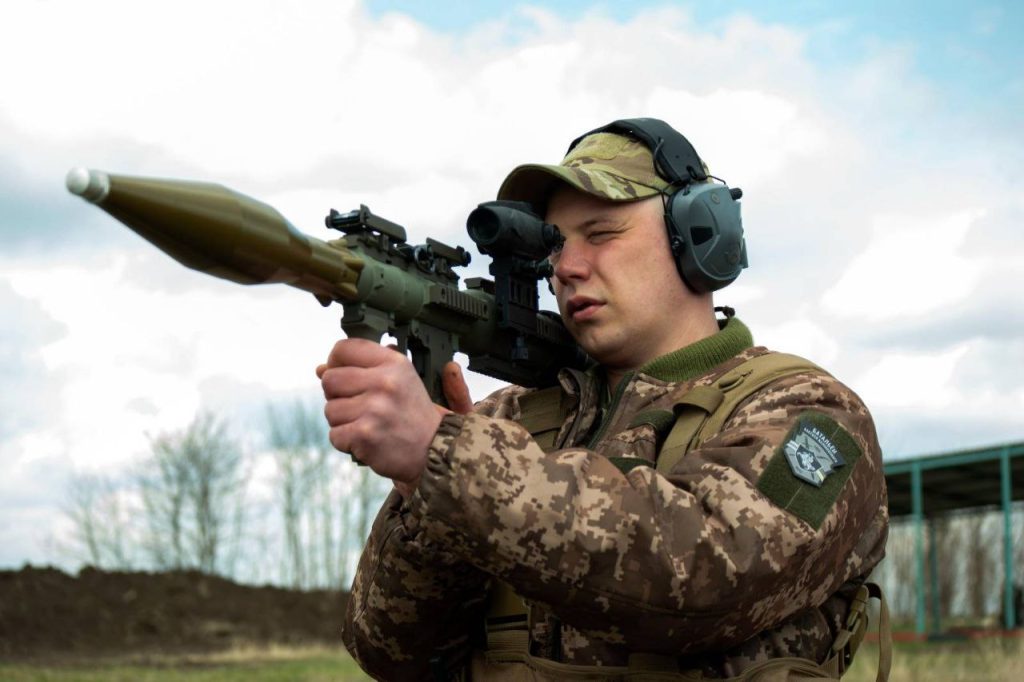 Among the thousands of foreign nationals who have volunteered to fight for Ukraine, the Belarusian contingent stands out. While Ukraine’s international fighters are all driven by a desire to counter Russia’s criminal invasion, many of those from Belarus also see the Ukrainian struggle as directly intertwined with their own dreams of national liberation.

It is impossible to provide an exact figure for the number of Belarusians currently fighting for Ukraine, but it is known that Belarus is the only nation to form its own battalion. Named after nineteenth century Belarusian revolutionary Kastus Kalinouski, the battalion was formed in early March and now has hundreds of members. It was incorporated into the Ukrainian army towards the end of March.

The Kastus Kalinouski Battalion has seen active service in the Russo-Ukrainian War and contributed to Ukraine’s victory in the Battle for Kyiv. Belarusian troops reportedly played a particularly prominent role in fighting to the north of the Ukrainian capital around Irpin. While most of the battalion remains based in the Kyiv region, some elements have since redeployed to the front lines in eastern Ukraine.

In addition to the Kastus Kalinouski Battalion, Belarusians are also fighting in the Pahonia unit, which was founded by Belarusian former businessman and army officer Uladzimir Prakopieu. This formation is composed of men with military backgrounds and is primarily located in the Kyiv region. There is also a Belarusian contingent within Ukraine’s Brotherhood Battalion which includes one fighter from Belarus whose distinctive moustache has helped make him something of a front line celebrity with popular Instagram and TikTok accounts covering daily life at war.

Belarus dictator Alyaksandr Lukashenka’s support for Vladimir Putin’s invasion of Ukraine has made it practically impossible for Belarusian volunteers to cross from their own country into Ukraine via the shared border connecting the two countries. Instead, a coordination network has sprung up with Polish capital Warsaw serving as a key hub.

Belarusians wishing to join must apply to coordination centers located within the EU. They then undergo verification and preparation before travelling to Ukraine. Representatives of Belarusian volunteer units have established procedures in cooperation with the Ukrainian authorities to allow verified Belarusian nationals into the country.

Many of the Belarusians currently fighting for Ukraine are recent recruits. Others were involved in the simmering eight-year conflict in eastern Ukraine conflict prior to the full-scale Russian invasion of February 2022. One such example is Dzianis Kit, who is currently responsible for training the soldiers of the Kastus Kalinouski Battalion and who previously served in eastern Ukraine.

Some of the Belarusian fighters have military backgrounds and served abroad prior to volunteering in Ukraine. Others are political emigres who left their homeland in the aftermath of Belarus’s suppressed 2020 pro-democracy protest movement. For example, social media activist Siarhei Biaspalau joined the Kastus Kalinouski Battalion at the beginning of the war.

The presence of growing numbers of Belarusian nationals fighting against Russia in Ukraine has not gone unnoticed in Minsk. On the contrary, the Belarusian Ministry of Internal Affairs is monitoring the situation closely and has already opened 50 criminal cases against members of the Kalinouski Battalion.

This caution reflects fears that the Belarusians currently fighting for Ukraine could eventually lead a movement for change inside Belarus itself. Indeed, many Belarusian volunteers make no secret of their hopes that the war in Ukraine will lead to the fall of the Lukashenka regime.

In interviews with the Ukrainian and independent Belarusian media, Belarusians fighting in Ukraine have repeatedly stated that they are fighting against the common enemy of Belarus and Ukraine. Most believe that defending Ukraine is a stepping stone towards a free Belarus and are convinced that the defeat of Russia in Ukraine will lead to defeat for Lukashenka in Belarus.

It is not clear exactly how the outcome of the war in Ukraine will impact events in neighboring Belarus. Some volunteers have spoken of using the military experience gained in Ukraine in order to overthrow the authoritarian regime back home in Belarus. Others feel that a Ukrainian victory would dramatically weaken Putin’s domestic position in Russia and create opportunities for a political transition toward democracy in Belarus.

For these Belarusian volunteers, the stakes could hardly be higher. No longer able to return to Belarus, they are fighting in a foreign war that could decide the fate of their homeland. Ukrainian success on the battlefield would transform the geopolitical balance of power throughout the former USSR and potentially pave the way for historic changes in Belarus. However, if Putin succeeds in subjugating Ukraine, any hopes for a free and democratic Belarus will be extinguished for a generation.