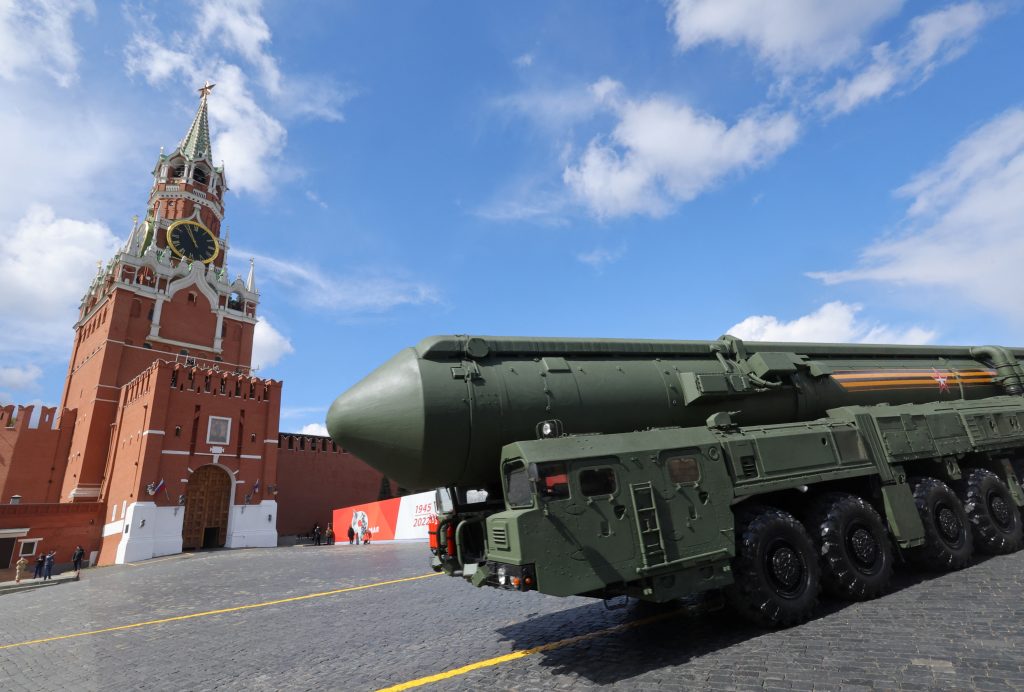 In a May 5 interview with the Associated Press, Belarus dictator Alyaksandr Lukashenka expressed concern that the ongoing Russo-Ukrainian War could see the use of nuclear weapons. Lukashenka called such use “unacceptable because it’s right next to us.”  He has good reason for concern.

Russia launched its invasion of Ukraine on February 24. With the war now in its eleventh week, the Russian military has failed abysmally in what appear to have been its original objectives of taking Kyiv, deposing the government, and occupying the eastern half of Ukraine. The Russian army is now struggling against fierce Ukrainian resistance to attain a down-sized goal of securing the Donbas region in Ukraine’s east while holding on to gains in the south of the country.

Lukashenko was no innocent bystander in this war. On the contrary, he allowed Russian troops to enter Belarus, from which they launched their aborted assault on Kyiv. Belarus has also served as a platform for hundreds of Russian airstrikes against Ukrainian targets.

As for the Belarusian autocrat’s concern, the only threats of nuclear use since the war began have come from his ally, Vladimir Putin, and other senior figures in Moscow. On February 27, for no apparent reason, Putin announced that Russia’s nuclear forces had been placed on “special combat readiness.” On April 25, Russian Foreign Minister Sergey Lavrov said the nuclear threat should not be underestimated.

Meanwhile, on one of Russia’s flagship television shows, leading propagandist Dmitry Kiselyov gleefully depicted a Russian nuclear weapon devastating the United Kingdom. This was one of several recent references by Kremlin TV pundits to Russia’s nuclear arms and the use of nuclear weapons. It is worth noting that none of these pundits has addressed what would happen to Russia when the inevitable retaliation arrived.

Despite the worrisome words from Moscow, the Pentagon has said that it currently sees no change in Russia’s nuclear posture.

So far, senior Russian military leaders have remained largely silent on the nuclear issue. Perhaps they understand better than Putin, Lavrov and Kiselyov that Russia’s introduction of nuclear weapons into the current war with Ukraine would open a Pandora’s Box full of unpredictable, nasty and potentially catastrophic consequences, including for Russia.

Lukashenka cannot comfortably distance himself from the nuclear issue. He is heavily dependent on Moscow’s support and recently oversaw a contrived referendum to approve a new Belarusian Constitution which permits nuclear weapons, presumably Russian, to be deployed in Belarus. Putin and Lavrov’s irresponsible attempts at nuclear intimidation should therefore worry Lukashenka, who also recently professed to be troubled that the war in Ukraine had “dragged on” longer than expected.

During much of the Cold War, NATO faced off against the Soviet Union and Warsaw Pact countries. Both sides arrayed against one another large conventional forces backed by nuclear weapons. NATO periodically war-gamed how a conflict with Soviet and Warsaw Pact forces would play out. These war games were sometimes designed with a nuclear element in order to give players a feel for the kind of consultations that would have to occur in the event of a nuclear war.

In those war games, if NATO decided to go nuclear, several questions arose. Perhaps the most important question was the choice of target for a nuclear strike. NATO of course did not want to target its own territory, but targeting Soviet territory could prove too escalatory. One other option presented itself: a strike against Soviet forces and other targets in the non-Soviet Warsaw Pact countries.

Fast forward to 2022. If the Kremlin were now to make the extremely reckless decision to use a nuclear weapon and NATO deemed a response necessary, the alliance would have a variety of options. One would be an overwhelming conventional counter-attack.

However, if the alliance considered a nuclear response, similar thinking as during the Cold War would likely apply. NATO would not want to target a nuclear weapon on NATO territory and might regard immediately striking Russian territory as too escalatory. As the victim of Russia’s invasion and a recipient of strong political support and major military assistance from NATO members, Ukraine would also be ruled out. This would leave Belarus. And Lukashenka has allowed the Russians to deploy plenty of possible military targets on his country’s territory.

Russia will hopefully not be foolish enough to use a nuclear weapon. However, the Belarusian autocrat might want to think about the potential implications for his own country. If the war drags on and the Kremlin, which has already made a series of miscalculations, were to make another regarding nuclear use, Lukashenka could well find that he has dragged Belarus into far more than he bargained for.

Steven Pifer is a William J. Perry Fellow at Stanford’s Center for International Security and Cooperation and a retired Foreign Service officer.

Image: A Russian Yars intercontinental ballistic missile system on Red Square during the Moscow Victory Day parade, which marks the 77th anniversary of the victory over Nazi Germany in World War Two. May 9, 2022. (REUTERS/Evgenia Novozhenina)