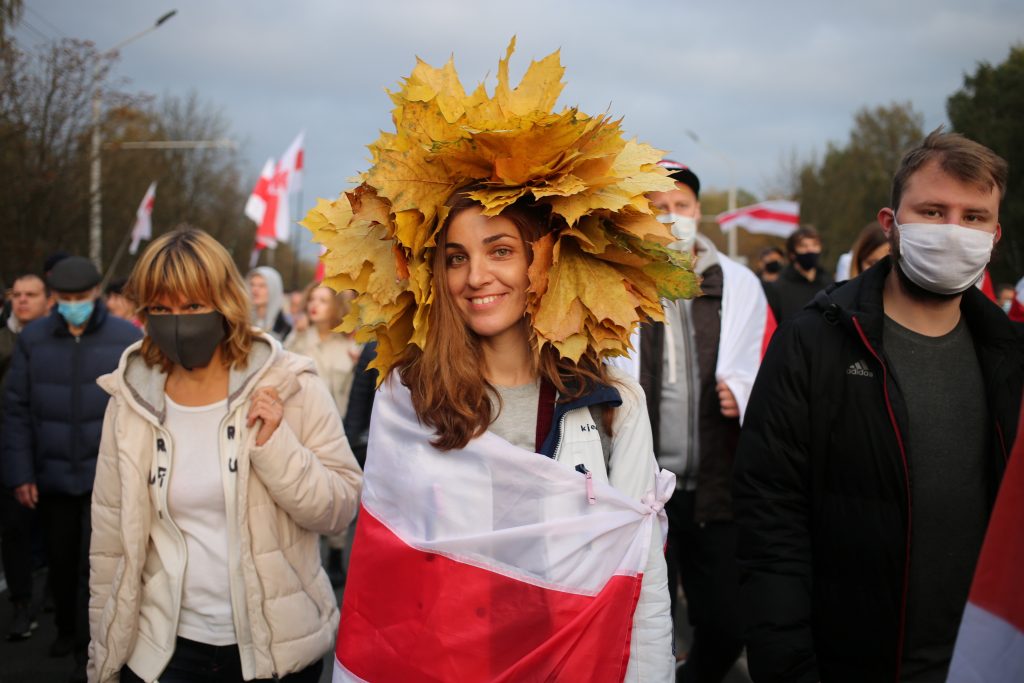 Three months since Belarusians first took to the streets to protest a rigged presidential election, few would now question the historic significance of the country’s pro-democracy uprising. Many observers believe the events since the August 9 presidential election represent nothing less than a full blown national awakening.

In a sense, the extraordinarily brave people of Belarus have already succeeded in transforming their country. However, the task of creating a modern democratic society is only just beginning. Today’s protest movement is necessarily focused on the immediate task of overthrowing the Lukashenka regime, but the transition from dictatorship to democracy will require a far longer nation-building process that still remains in its very early stages.

Throughout his 26-year reign, Belarusian president Alyaksandr Lukashenka has done a thorough job of stunting the nation’s evolution. His dictatorial rule has prevented Belarusian society from experiencing even the kind of idiosyncratic and often quirky democratic and national development that is typical of the post-Soviet world.

The scale and resilience of the recent protest movement has now made it painfully clear that Lukashenka’s very eccentric and ideologically particular regime cannot hope to survive indefinitely. This is obvious to most observers, regardless of whether he is able to cling onto power with Moscow’s help for a matter of months or even years. The real question is what comes next.

The massive protests against Lukashenka offer clear evidence of an overriding popular will among the Belarusian population for a thorough cultural, economic, political, and social transformation. This reinvention of Belarus is long overdue. It should arguably have begun in the early 1990s, immediately after the collapse of the Soviet Union.

As a doctrine of repression, Soviet Communism specialized in upending cultural roots and destroying any vestiges of civil society that existed beyond the all-powerful state itself. In fact, wiping out the particularity of local cultures was a predicate for transforming individuals into Soviet subjects.

Since first coming to power in 1994, Lukashenka’s post-Soviet dictatorship has continued this debilitating tradition as a means of holding on to power. Regenerating what was lost and building a fully functioning civil society is a generational process for today’s Belarus that is currently in its infancy.

Luckily, Belarusian society has a number of very positive character traits that bode well for this process. Developments since August 2020 have underlined a strong Belarusian inclination towards good organization, compromise, and a willingness to cooperate, as well as an innate capacity for strategic decision-making.

Taken together, these characteristics form an excellent basis for a healthy and pluralistic political life. Indeed, many other societies embarking on a modern nation-building journey have begun from far weaker foundations. Nevertheless, the process of forging the basis of a national political ecosystem in Belarus will be neither quick nor painless.

For over a quarter of a century, political activity in Belarus has been thoroughly repressed at every level of society, with any traces of pluralism or grassroots political participation stamped out. In the process of centralizing his presidential authority, Lukashenka has hollowed out the Belarusian party system. The country’s parliament, where Lukashenka himself first began his political career, has long since ceased to serve any function other than confirming the president’s personal whims.

There are no independent political parties in Belarus to speak of, just as there are no oligarchs, no independent businessmen of any significance, and no independent trade associations capable of serving as a counterbalance to the power of the state. Perhaps the only noteworthy difference between the present situation and the Soviet era is the role played by various religious denominations in modern Belarusian society. These different faith groups represent the only serious social forces with the space to maneuver outside of Lukashenka’s direct control.

As Belarus’s neighbors in Ukraine have learned, overthrowing an oppressive and undemocratic regime is merely the first stage in the far greater task of rebuilding society along democratic lines and establishing a functioning modern European country. Transitioning from authoritarian to democratic government also means creating many of the requisite structures of political representation from scratch.

While both countries are unique, Ukraine’s experience nevertheless offers some hints as to what now awaits Belarus. Thanks to two post-Soviet pro-democracy uprisings, today’s Ukraine has already made significant progress in its nation-building journey. However, the country’s relatively vibrant democratic culture remains largely personality-based and devoid of ideologies. Instead, traditional notions of left and right wing political doctrine along with complex debates over policy and ideas have been replaced by simpler geopolitical divisions into opposing pro-European and pro-Russian camps.

Even this somewhat crude form of political pluralism does not yet exist in Belarus. If the country is able to move beyond the Lukashenka dictatorship, it will then need to engage in a soul-searching conversation about the structuring of political parties and the goals of any future democratic system.

One of the main driving forces behind a healthy democracy is a thriving civil society, with rival interest groups competing and compromising in the fight for influence among different political parties. As Lukashenka has prevented any kind of meaningful civil society from taking root in post-Soviet Belarus, Belarusians must now rebuild the social trust that is the lifeblood of a modern political nation. A country that has been run like a European version of North Korea, where citizens have been routinely spied on by colleagues and neighbors for more than a generation, will not be able to overcome the current deficit in social trust quickly.

The good news is that Belarusians have demonstrated considerable talent for improvising civil society structures during the past three months of struggle against the Lukashenka regime. This experience of volunteerism and community engagement is invaluable and can serve as the foundation stone for a future civil society, if and when Belarus is able to overthrow the current dictatorship.

The struggle against the Lukashenka regime is still far from over, but Belarusians would be wise to adopt a broad view and begin planning for the next chapter in their country’s national life already. The protest movement that erupted in early August took almost everyone by surprise, but it has since become increasingly evident that we are witnessing a watershed moment in the country’s history. After decades of dictatorship, the uprising has fundamentally changed the way Belarusians view themselves and transformed attitudes towards national identity in ways that scholars will only begin to understand in hindsight.

Tremendous challenges lie ahead on the path to building a functioning modern European society in a country that until recently was best known as the continent’s last dictatorship. Belarusians must embrace a wide range of new habits and create the institutional framework that forms the basis of political life in a liberal democracy. Belarus is one of the region’s most disciplined and dialogue-oriented societies, but the coming transition will not be easy and it will not happen overnight.

Image: A lady sporting a leaf headdress and the historic Belarusian national flag attends a pro-democracy rally in Minsk on October 25. (REUTERS/Stringer)