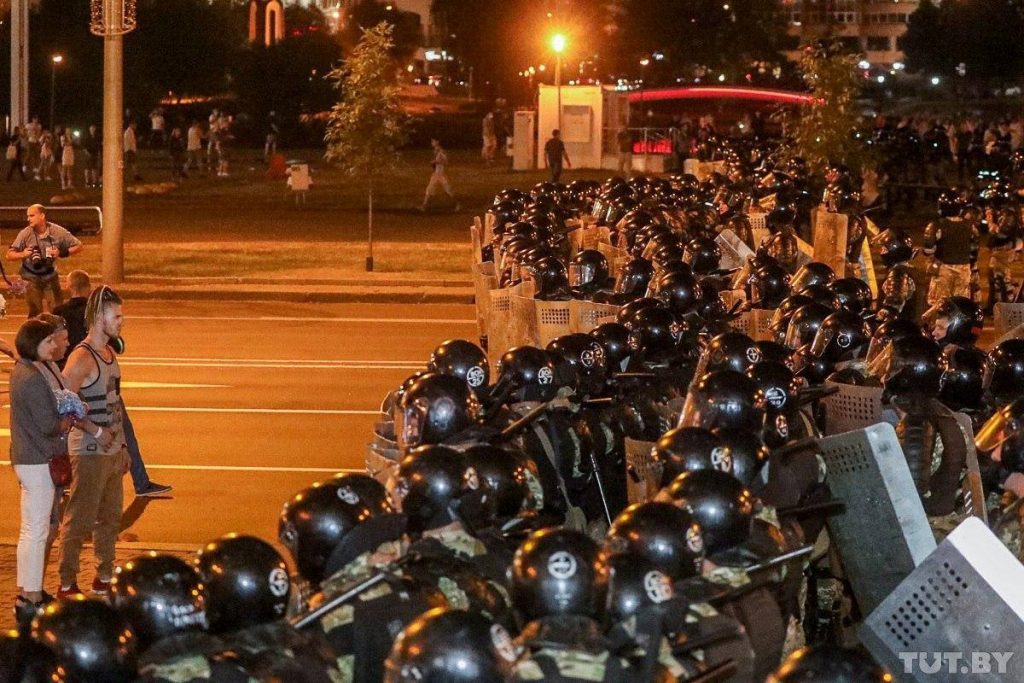 For the past 26 years, Belarus has been the personal fiefdom of Alyaksandr Lukashenka. Often referred to as Europe’s last dictator, Lukashenka has maintained a tight grip on power by retaining much from the country’s Soviet past. His position had looked secure until the start of the country’s presidential election campaign in spring 2020. Despite imprisoning or otherwise suppressing most of his potential rivals, Lukashenka has found himself facing a unified opposition and fighting for his political life. How did Lukashenka last so long, and why is his regime now under threat?

In July 1994, Alyaksandr Lukashenka was elected president of Belarus with 80 percent of the votes cast in a runoff against the communist leader Vyacheslav Kebic. Lukashenka was previously director of a state farm and had made a swift political career as an anti-corruption politician. The 1994 election was perceived as free and fair. It was probably the most credible vote ever held in Belarus. At the time, Lukashenka was seen as a populist with no clear political program. Belarusians had voted against the old communist establishment.

Gradually, Lukashenka’s political agenda began to take shape. It consisted of three main elements: the restoration of the old Soviet economic system with only marginal market economic elements; gradually increasing political repression; and close political relations with Russia. By and large, he adopted the program of the communists that he had defeated, and they soon closed ranks behind him.

Lukashenka has maintained political power ever since through strong state control of the economy, control over the media, and as much repression as the situation has demanded. He is accused of at least four political murders and has imprisoned dozens of political opponents, but repression has been relatively limited in scope.

I visited Belarus for the first time in June 1986. I was impressed by the uncommonly good order, honesty, and good economic level of the then-Soviet republic, while intellectual opposition seemed absent. Belarus appeared to be the Prussia of the Soviet Union. It was the last Soviet republic where the communist economic system worked and it was also the most militarized. Not surprisingly, it took time for perestroika and glasnost to take root there, leaving the Communist establishment strong.

Soon after having become president, Lukashenka stopped the limited market reforms that independent Belarus had started and ended all privatization. Instead, he focused on stabilizing forty big Soviet enterprises, notably the Minsk Tractor Factory (MTZ), the Minsk Truck Factory (MAZ), two oil refineries (Mozyr and Naftan), and the large fertilizer company Belaruskali. Belarus produced the best Soviet machinery for Russia, while it exported refined Russian oil and fertilizers to the West. The private sector was kept small at 20-30 percent of GDP. The Belarusian economy was in many ways the last Soviet economy.

Such an economy could not develop much. The surprise has been that it has held up for so long. The main explanation has been strong Russian support. Crucially, Russia has bought Belarus’s Soviet products. When entering a Russian home appliances store, you find Italian and Belarusian stoves, the latter being significantly cheaper and less elegant but quite functional. Traditionally, Belarus has exported most of its produce to Russia, but the question was always how fast it would lose out, since its products did not improve, unlike those of its competitors.

Russia has also supported Belarus through implicit energy subsidies. It has sold Belarus crude oil and natural gas at prices well below the market level. These subsidies have varied with market prices and bilateral political agreements, but the International Monetary Fund has assessed them at around 10 percent of Belarus’s GDP, which is huge.

Even so, Lukashenka has driven his country’s economy into one financial crisis after another by causing excessive current account deficits. For many years, Lukashenka targeted an average monthly wage of USD 500, which is approximately where it is right now, but his economy could often only afford just over half of this sum. Therefore, he has needed somebody to bail him out.

Most of the time he has turned to Russia. This happened most recently in 2011, when Belarusian inflation swung up to 109 percent because of his financial mismanagement. However, not all roads have led to Moscow. In 2008-9, Lukashenka turned instead to the International Monetary Fund and the European Union.

As thousands take to the streets to protest the August 9 election results, can popular will bring about a democratic transition in Belarus?

In the last few years, Lukashenko has managed to reestablish relations with the IMF, the World Bank, and the European Bank for Reconstruction and Development, but they are not enchanted by his poor policies and have offered little funding. Meanwhile, Russia’s President Vladimir Putin has tightened the screws and eliminated almost all subsidies. On average, Belarus’s GDP has been flat since 2012.

Lukashenka has now finally run out of slack, it would appear.

For years, he outwitted Putin, who often seems unable to handle his antics. In a typical gesture at the last New Year, Lukashenka visited Putin in his mansion outside Moscow with three bags of potatoes. But such stunts are no longer able to disguise the changing tone of the relationship. Recently, Putin seems to have put his foot down and is demanding progress towards the Union State uniting Belarus and Russia.

The Belarusian dictator has sought greater Western engagement to counterbalance Russia. However, the West desires not only freedom and democracy in Belarus but also a reasonable economic policy. Lukashenka either cannot or will not deliver any of this.

Most importantly, the Belarusian people appear to have finally had enough of a president who does not really deliver on any account. They want the kind of change that Lukashenka is unable to provide. The pro-democracy movement that has emerged in recent weeks reflects a national awakening that is unlikely to go away entirely, even if a temporary crackdown proves possible in the days ahead. Europe’s last dictator has never looked more vulnerable.