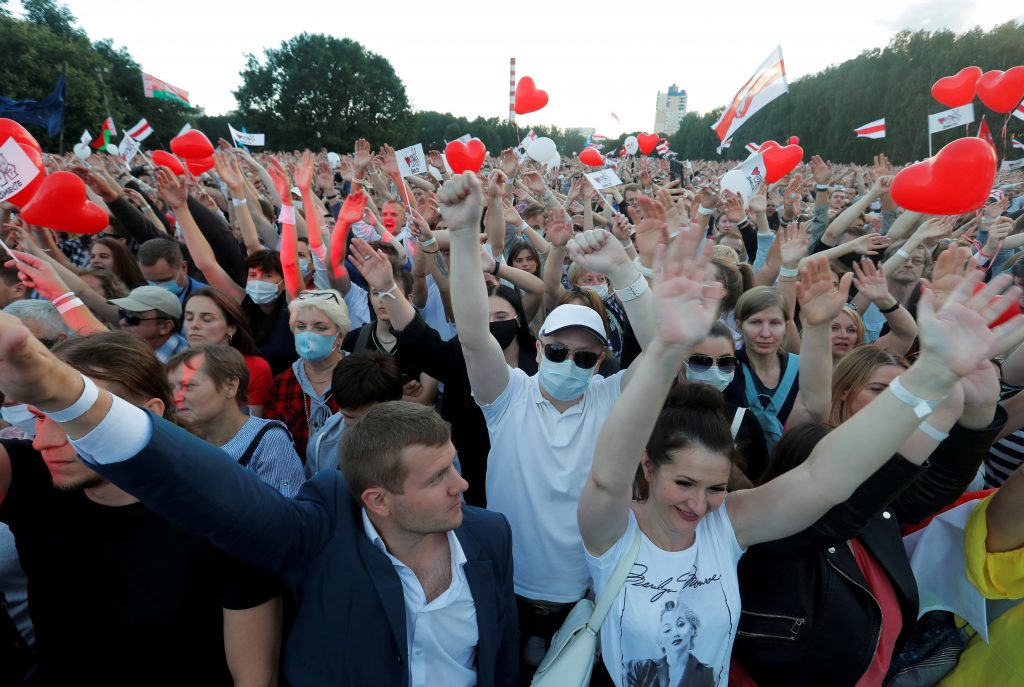 The presidential election in Belarus this weekend promises to provide the toughest challenge to the country’s authoritarian regime for over a quarter of a century. Sunday’s vote pits the incumbent and five-term president Alexander Lukashenko against 37-year-old former English language teacher Svetlana Tikhanovskaya.

This unlikely David and Goliath confrontation took shape after Tikhanovskaya reluctantly joined the race for the presidency following the imprisonment of her politically active blogger husband. She has since become the figurehead of a unified opposition movement that is pushing for a peaceful transition towards democracy and an end to the 26-year rule of the man dubbed “Europe’s last dictator”.

Belarusian elections normally fail to generate much in the way of international media interest. For the past two-and-a-half decades, the Lukashenko regime has routinely rigged every election taking place in the country and imprisoned an entire generation of opposition figures.

This campaign is different. Over the past few weeks, many of the world’s most high-profile newspapers and TV channels have run reports on Tikhanovskaya’s dramatic bid to become president of Belarus. It is undeniably an attractive story reminiscent of a Hollywood fairytale, with the unassuming and modest Tikhanovskaya cast in the leading role as she draws unprecedented crowds of supporters to rallies across the country.

Her opponent Lukashenko makes for a formidable villain. The Minsk strongman initially sought to use the same tactics during the current campaign that have helped him maintain his grip on power for so long. This included imprisoning the leading opposition candidates and rejecting their applications as candidates. The only figure allowed to appear on the ballot was Tikhanovskaya. It appears the authorities did not regard her as a serious threat and believed her inclusion could bring a semblance of democratic credibility to proceedings. This now looks to have been a catastrophic misreading of the situation.

Although Belarus does not allow independent opinion polls, anecdotal evidence strongly suggests the mood in the country has dramatically turned against Lukashenko in recent months. Many simply appear to be tired of his endless rule and hungry for change. More immediate factors include Lukashenko’s buffoonish handling of the coronavirus crisis, which saw him advising Belarusians to beat the pandemic by drinking vodka, visiting saunas, and engaging in tractor rides. Significant portions of the Belarusian public had previously tolerated Lukashenko’s rule because it offered a modicum of stability and security in an uncertain post-Soviet environment. With the coronavirus outbreak leading to mounting healthcare and economic crises in the country, this is no longer the case.

The changing mood in Belarus has been evident since spring 2020, when the process of collecting signatures for presidential candidates saw long queues appear in town centers and city squares across the country. This set the stage for the current public engagement in Belarusian politics. Following confirmation of Tikhanovskaya’s candidacy, her rallies have become a focal point for the country’s democratic opposition.

While previous pro-democracy political movements has typically been restricted to a limited circle of activists in the largest Belarusian cities, the Tikhanovskaya campaign has been able to gather crowds of thousands in small regional centers. Despite attempts by the authorities to downplay this trend, it is clear that she has staged the largest political rallies in independent Belarusian history, including one late July event in Minsk that drew an estimated 60,000 people.

With the first round of voting now just a few days away, tensions in Belarus are close to boiling point. Lukashenko’s most recent public address earlier this week was full of defiance, bluster, and thinly veiled threats. He is clearly rattled. However, it is equally clear that he will not step down without a fight.

Many now fully expect Lukashenko to steal the vote and declare himself the winner before unleashing the security services against any opposition. We have seen similar crackdowns many times before in Belarus, but this election is different. With so many Belarusians getting behind the Tikhanovskaya campaign, the scale of the democratic awakening currently taking place in the country renders the old methods of repression inadequate. Instead, a far longer confrontation is likely, with potentially grave human rights consequences.

The role of the international community will be crucial in the days and weeks ahead. Opposition activists in Belarus are counting on the European Union and the wider Western world to support the country’s democratic aspirations and restrain Lukashenko’s worst instincts.

Many fear they will receive nothing more than the dreaded “expressions of concern” from European capitals that oppressed people around the world have come to recognize as a signal to abandon all hope of anything more substantial. This could prove disastrous. The democratic opposition in Belarus may well have reached critical mass, but it is highly unlikely to prevail without outside support.

The most meaningful measures the international community can adopt include personal sanctions targeting individual members of the power apparatus that the Lukashenko dictatorship depends on. Lukashenko knows this is potentially his Achilles heel. During his August 4 address, he specifically warned public officials against betraying him.

Lukashenko will need complete loyalty if he proceeds with attempts to falsify the August 9 vote and then orders mass arrests during any subsequent protests or acts of civil disobedience. The Belarus dictator’s concerns are easy to understand – over the past few decades, a number of other post-Soviet regimes have come undone when state employees deserted an increasingly unpopular authoritarian ruler.

In order to be effective, personal sanctions would need to target a wide range of Belarusian public officials including members of the presidential administration, officials from the interior ministry and the judiciary, members of the country’s central and regional election commissions, and media professionals who produce propaganda for the regime. Many of these state employees may be tempted to think twice about actively supporting a crackdown if they know it will leave them facing significant international financial and travel restrictions. Once the first officials break ranks with Lukashenko, we might then see a domino effect that would undermine the foundations of the entire regime.

Other welcome measures would include tough sanctions against businesses and sectors linked to the Lukashenko family and those close to the regime elite. At the same time, Belarus’s international partners must also make clear that their support depends on continued adherence to certain basic human rights in the country.

Belarus is worth betting on. Many outside observers have long written the country off as a pseudo-Soviet curiosity, but the recent wave of pro-democracy protests has revealed another Belarus that desires progressive change and is eager to embrace European integration. With a highly educated population of almost 10 million, a democratic Belarus would be a welcome addition to the European community of nations.

The hundreds of thousands who have flocked to Svetlana Tikhanovskaya’s campaign rallies have consistently repeated the same message: they want a peaceful transition to democracy and a state governed by the rule of law. The outside world has clearly heard them. The big question now is whether the international community is prepared to intervene on their behalf in the coming days as the country attempts to make history.