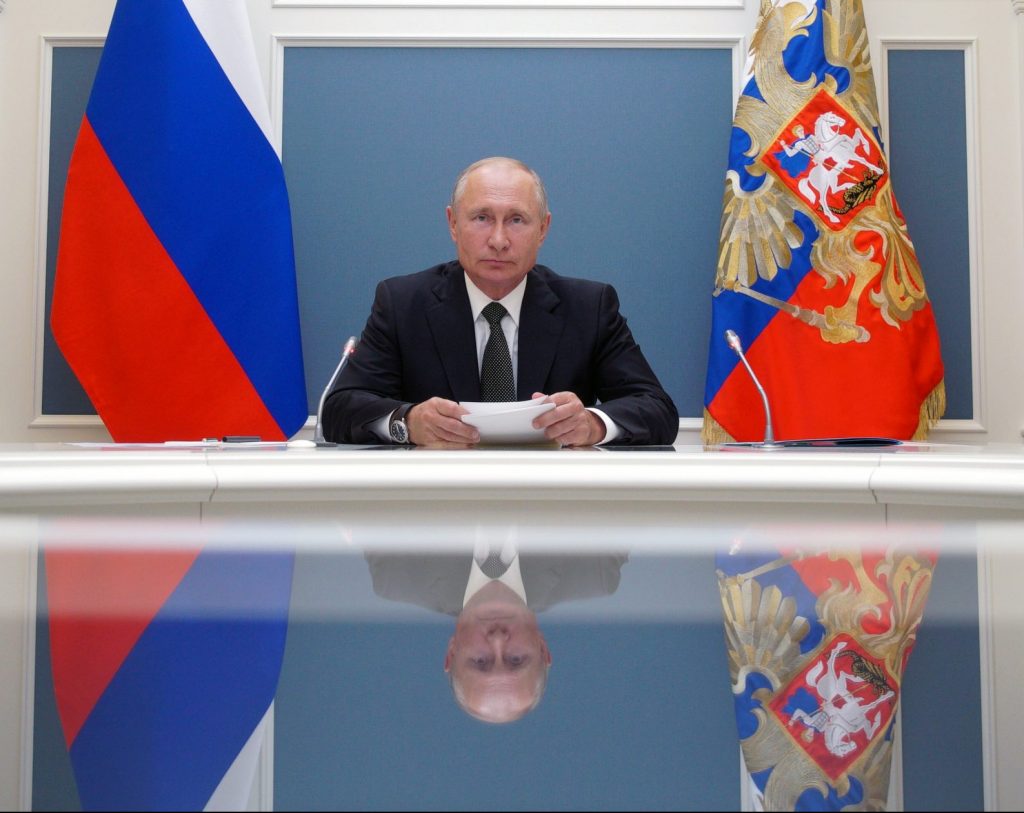 On July 1, Vladimir Putin entered a new phase of his reign that will likely keep him in the Kremlin until 2036. This extension came by way of a national vote on constitutional changes that included a proposal to nullify previous presidential terms, thereby allowing the Russian leader to serve two more six-year presidential stints once his current mandate expires in 2024.

This constitutional conjuring trick strips the Putin regime of any lingering democratic legitimacy and leaves ordinary Russians facing sixteen more years without the prospect of change. For Russia’s neighbors, it means another decade and a half living next door to a powerful dictator who makes no secret of his revanchist instincts and imperial ambitions.

The implications are most immediately apparent in Ukraine, which is currently in the seventh year of a conflict managed from Moscow that has come to define the aggressive revisionism at the heart of Putin’s worldview. As long as the current Russian ruler remains in power, few Ukrainians see any chance of progress towards a durable peace.

The most obvious evidence of Putin’s hostile long-term intentions towards Ukraine is the ongoing incorporation of Crimea into the Russian Federation. Ever since the Ukrainian peninsula was militarily occupied and annexed in the spring of 2014, Putin has made the integration of Crimea a top priority. Money has proven no object, with huge amounts of Kremlin cash made available to subsidize the Crimean budget and billions of dollars invested in flagship infrastructure upgrades such as the bridge linking Crimea to the Russian mainland across the Kerch Strait.

Moscow has also succeeded in dramatically altering the demographic and social balance on the peninsula. Over the past six years, tens of thousands of Russians have settled in occupied Crimea, while Ukrainian language schools have been shuttered along with churches belonging to the Orthodox Church of Ukraine and other symbols of Ukrainian identity. In line with recently adopted legislation, schools on the peninsula will now teach schoolchildren “Russian patriotism”.

The most dramatic changes have been felt by the indigenous Crimean Tatar community, which has come under specific attack. According to the United Nations, Russia has launched a campaign of discrimination and persecution that has targeted Crimean Tatars in particular. This has included everything from the closure of Crimean Tatar media and community organizations to frequent raids on homes and politically motivated arrests.

Ever since 2014, Moscow has been adamant that the Crimean issue is settled. As long as Putin remains in control of Russia, it is difficult to conceive of any circumstances that would lead him to alter this stance. Indeed, the Crimean conquest has become so central to the mythology of Putinism that any attempt to revisit the status of the peninsula would risk precipitating a domestic crisis.

This reality was reflected in Russia’s recent constitutional changes, with one of the additional amendments making it virtually impossible to raise the issue of undoing the annexation and returning Crimea. As long as the Kremlin occupation of Crimea continues, there can be no definitive end to the conflict between Russia and Ukraine.

The extension of Putin’s reign also has ominous ramifications for Russian-occupied eastern Ukraine. April 2020 marked the sixth anniversary of the war in eastern Ukraine’s Donbas region between the Ukrainian military and Kremlin-led forces. There is little current prospect of progress towards peace. The 2015 Minsk Agreements remain largely unimplemented amid disagreement over the sequencing of the many stages in the envisioned peace process.

Hopes of a breakthrough rose briefly following the April 2019 election of Volodymyr Zelenskyy as Ukraine’s new president. However, this optimism has now given way to a growing consensus in Kyiv and Western capitals that Putin has no desire to end the war and would instead prefer to keep Ukraine destabilized by retaining the option of military escalation.

Such thinking is supported by Russian actions. While Putin continues to deny any direct Russian role in the conflict, over the past year he has repeatedly questioned Ukraine’s historical right to the Donbas and reiterated his belief that Ukrainians and Russians are “one people” who have been unjustly and artificially separated by outside forces.

These dubious claims appear tailor-made to belittle Ukrainian statehood while serving to justify further Russian interference. The one thing they most certainly do not imply is an inclination towards peaceful coexistence.

Russia’s contributions to the floundering peace process offer further evidence of the Kremlin’s questionable intentions. Since spring 2019, Zelenskyy has made concession after concession in a bid to bring Putin to the negotiating table. The Kremlin strongman has responded by issuing hundreds of thousands of passports to Ukrainians living in the Russian-occupied east of the country.

Russian officials have recently stated that they hope to distribute up to one million passports in eastern Ukraine by the end of 2020. This will transform the occupied zone into a “passport protectorate” and create the pretext for endless future Russian interventions.

With the quest for peace in eastern Ukraine going nowhere, there are mounting concerns over how the conflict may develop. Now that Putin has secured his domestic position and brought an end to speculation over possible successors, he may feel free to embark on a new foreign policy adventure in Ukraine.

One potential target could be the North Crimean Canal, which brought water from the Dnipro River in southern Ukraine to Crimea until Russia’s 2014 invasion. This canal played a vital role in keeping Crimea irrigated. Its loss has resulted in a rapidly deteriorating ecological situation on the occupied peninsula, leading to speculation that Russia might opt for a military solution.

Rumors of a possible offensive have been further fueled by preparations for large-scale Russian military maneuvers that are scheduled to take place in Crimea and the border regions close to eastern Ukraine in September 2020. The timing would certainly be opportune for the Kremlin, with the international community preoccupied with the coronavirus crisis and America distracted by the 2020 presidential race.

This current round of speculation may turn out to be the latest in a long line of false alarms, but the threat of a new Russian escalation will remain for the foreseeable future. Putin’s intervention in Ukraine has already plunged Russia into a new Cold War with the Western world, but he has shown no inclination to moderate his position. On the contrary, Putin appears convinced that his historic mission to revive Russia’s greatness depends on the subjugation of Ukraine, and refuses to change course despite the considerable costs he continues to incur.

With the international community showing little appetite for confrontation and Ukraine too weak to unilaterally expel Russia, Putin has no obvious reason to modify his aggressive stance. Some analysts believe the deteriorating domestic situation in Russia could restrict his ability to pursue an expansionist foreign policy in Ukraine, but the experience of the past six years suggests that Putin’s Ukrainian ambitions will be among the very last things he is prepared to sacrifice to expediency.

If Ukraine wishes to survive the Putin era independent and intact, it must adopt a long-term approach to the current conflict. This means abandoning the wishful thinking of a negotiated peace and developing strategies that will enable the country to maintain its defensive capabilities into the next decade and beyond.

Mark Temnycky is an AIPS accredited freelance journalist who covers European politics and sports. His articles have been published by the Atlantic Council, the Wilson Center, Forbes, and EURACTIV.

Image: Russian President Vladimir Putin's recent constitutional amendments will allow him to extend his reign until 2036. This undermines faint hopes for an end to the six-year Russo-Ukrainian War. Sputnik/Alexei Babushkin/Kremlin