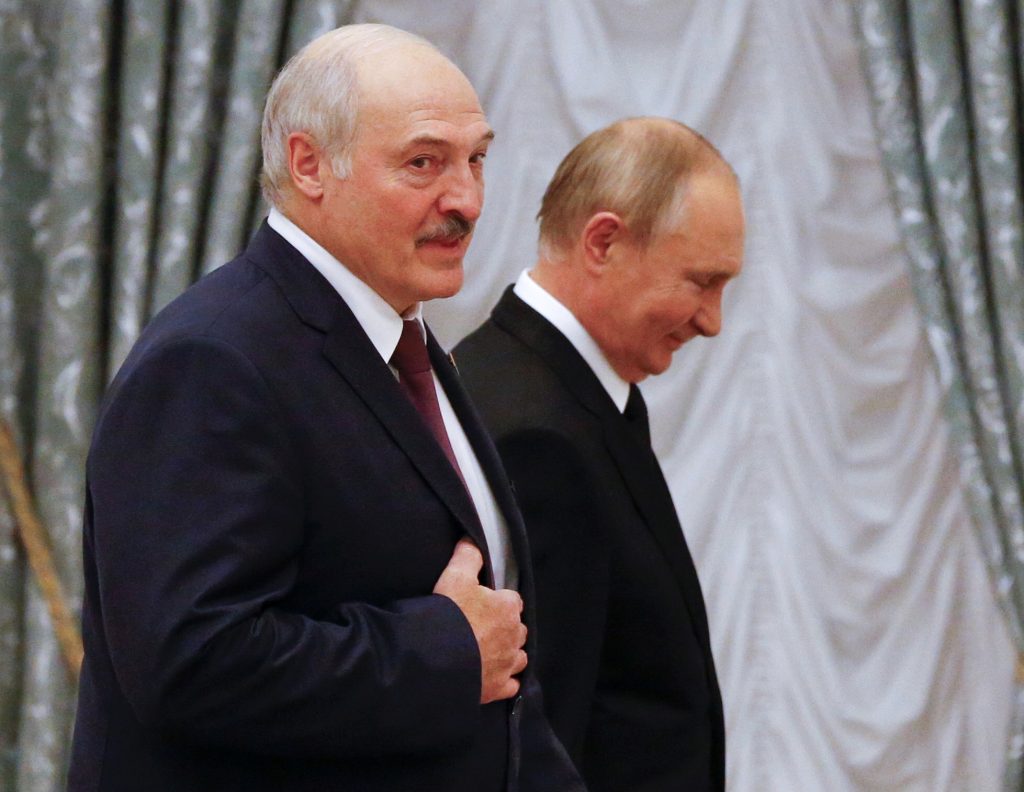 Russian Defense Minister Sergei Shoigu recently invoked the NATO boogeyman as justification for closer military integration with Belarus. And that may be a sign that Alyaksandr Lukashenka’s gambit to go all in on Moscow’s conflict with the West has convinced the Kremlin to keep him around.

After a meeting of top military officials in Moscow on October 20, Shoigu said that due to the threat from the Western alliance, he and his Belarusian counterpart Viktor Khrenin agreed to extend the lease on a Russian-operated early warning radar installation in the Brest region of Belarus near the Polish border and a naval communications center in Vileyka near Minsk. Shoigu also said Russia and Belarus plan to carry out large-scale military drills in 2023.

Intensifying military cooperation and integration between Moscow and Minsk is, of course, nothing new. This process has been underway for much of the past year. Lukashenka told reporters recently, for example, that Russia and Belarus were in the process of establishing “a single army with the Belarusian military forming its backbone in the western direction.”

And this is not just rhetoric. For the past year, Russia has been steadily expanding its military footprint in Belarus. The two countries conducted a record number of military exercises in 2021 with the constant rotation of forces effectively establishing a de facto permanent Russian troop presence in Belarus.

In September 2021, Russia deployed Sukhoi Su-30 fighter jets to the Baranovichi air base in western Belarus. The jets and their pilots will be permanently based in Belarus, where they will fly joint missions and patrol the two countries’ borders.

Days before the aircraft arrived, Russian anti-aircraft missile troops began deploying to the western Belarusian city of Hrodna, near the country’s border with Poland and Lithuania, to set up a joint military training center. Russia and Belarus will also establish two more joint training centers on Russian territory, one in Kaliningrad and another in Nizhny Novgorod.

In a clear effort to win Kremlin support for his continued rule, Lukashenka has been persistently offering to make Belarus a bulwark against NATO and effectively allow the country to be turned into an extension of Russia’s Western Military District.

In a televised meeting with his top military brass on September 27, Lukashenka alleged, without evidence, that NATO was establishing bases in Ukraine. “They are dragging NATO troops there, to Ukraine. Under the guise of training centers, they are actually creating bases. The United States is creating bases in Ukraine. It is clear that we need to react to this,” Lukashenka said. “The Russian president and I have held and are holding consultations on this issue, and have agreed that some action should be taken there.”

It appears that Lukashenka’s NATO baiting is resonating with the Kremlin. Almost immediately following the Belarusian autocrat’s remarks on Ukraine, Kremlin spokesman Dmitry Peskov responded, as if on cue, that any NATO infrastructure in Ukraine would “cross red lines.”

Lukashenka’s pandering to the Kremlin with bellicose rhetoric toward NATO is a sharp departure from the stance he took in the past, when he made it clear he was not interested in participating in Russia’s confrontation with the West. That, of course, was before his brutal crackdown on dissent following the August 2020 Belarusian presidential election, which has made Lukashenka a pariah in the West.

The Belarus dictator’s increasingly confrontational stance toward NATO and the EU has been taking place amid widespread speculation that Moscow wants to remove Lukashenka and replace him with a more pliant figure.

For the past year, Russia has been persistently pressuring Lukashenka to enact constitutional changes that would weaken the presidency and empower the Belarusian parliament. The Kremlin has also reportedly been putting the pieces in place to assure that Moscow would be in a position to control such a newly empowered legislature through pro-Kremlin parties and media. It all looked like a carefully planned operation to establish Moscow’s dominance over a post-Lukashenka Belarus.

Is Lukashenka’s decision to go all in on Russia’s conflict with the West enough to keep him in the Kremlin’s good graces and in power? He certainly appears to think so.

Speaking on October 21, Lukashenka seemed to suggest that the Moscow-backed plan to ease him out by empowering the Belarusian parliament was now dead in the water. “I am absolutely convinced that Belarus must be a presidential republic if we want to save the country,” Lukashenka declared.

Not only has the Belarusian dictator sided decisively with the autocrat in the Kremlin, but the autocrat in the Kremlin also appears to be going all in with the Belarusian dictator as well. The axis of autocrats on the EU’s eastern border is now thick as thieves. And in military terms, the West needs to confront Belarus and Russia as a single unit.

Imprisoned activist Maria Kalesnikava did not seek a career in politics but since the outbreak of anti-regime protests in Belarus she has become a source of inspiration for the country’s pro-democracy movement.

The views expressed in BelarusAlert are solely those of the authors and do not necessarily reflect the views of the Atlantic Council, its staff, or its supporters.

BelarusAlert is a comprehensive online publication that provides regular news, commentary, and analysis on developments on Belarus’ politics, economy, civil society, and culture.