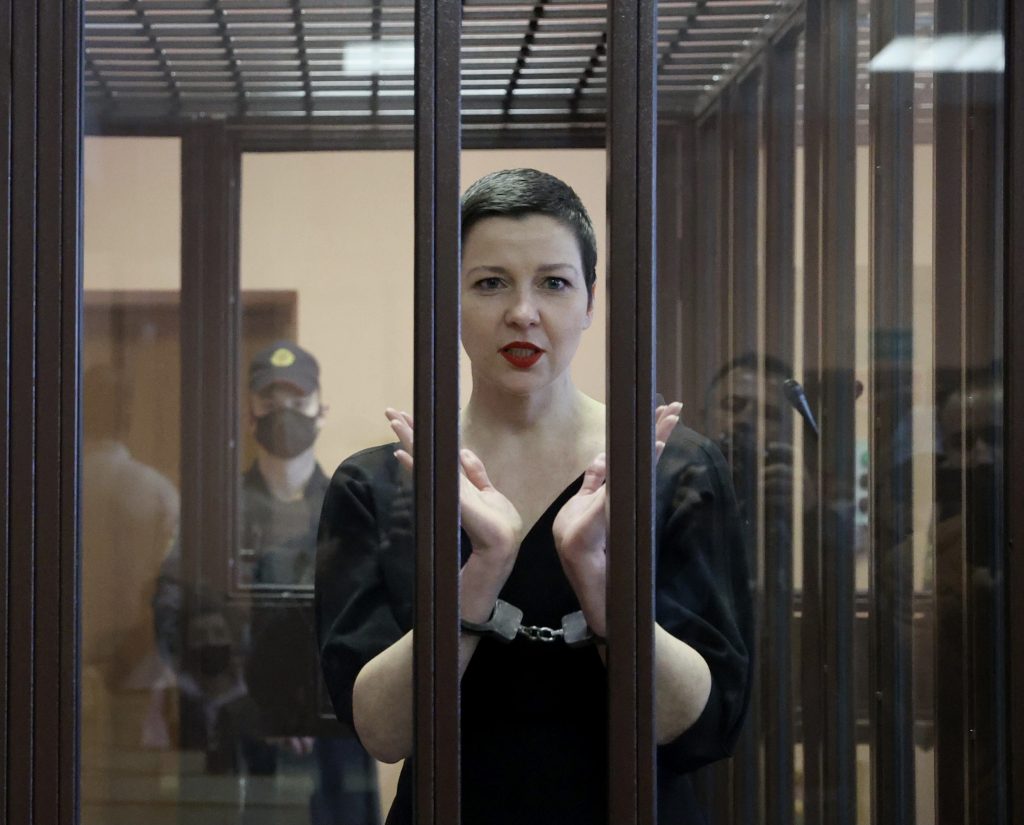 One could be forgiven for thinking that Maria Kalesnikava and Tatsiana Khomich are not sisters. Apart from the pitch of their voices and the same warm eyes, the two siblings look nothing alike and couldn’t be more different. However, since Maria’s imprisonment as part of a brutal government crackdown in Belarus, Tatsiana has found herself championing her sister’s cause and that of the more than nine million Belarusians living under increasingly dictatorial rule.

Kalesnikava is one of the leaders of the democratic movement in Belarus. She is currently serving out an eleven-year prison sentence in Belarus on bogus charges. Maria is brash, bold, stubborn, and outspoken. Tatsiana is anything but. When she speaks, one must lean forward to hear her.

With her white blond hair and ubiquitous fire engine red lipstick, Maria gained notice last year after she joined forces with Sviatlana Tsikhanouskaya and Veranika Tsapkala in a grassroots movement that won the hearts of Belarusians and came close to ending the 26-year reign of dictator Alyaksandr Lukashenka.

The three women were stand-ins for male candidates that Lukashenka had imprisoned ahead of Belarus’s August 2020 presidential election. The old collective farm boss figured that Belarusians would never vote for a woman. He could not have been more wrong.

Maria represented presidential candidate Viktar Babaryka, a banker and philanthropist she had collaborated with for years on arts projects. Maria and Veranika threw their weight behind Sviatlana Tsikhanouskaya, who then likely won the presidential vote. However, nobody knows the real outcome of the election because Lukashenka rigged the count.

The ensuing events are well known: Lukashenka cranked up his repressive apparatus after hundreds of thousands of Belarusians clogged the streets across the country in an unprecedented wave of protests demanding a different future.

The day after the August 2020 vote, Sviatlana Tsikhanouskaya was forced to flee to Lithuania, while Veronika had already left the scene before the election. Of the three opposition leaders, Maria alone remained and stood with the large protest movement. The regime wanted to get rid of her and kidnapped her on September 7, 2020. They attempted to deport her to Ukraine, but Maria resisted, tearing up her passport at the border.

“If she wants something, she will do it. She is a little stubborn,” Tatsiana says with a laugh. “It was a message that no one can force you to leave the country or do something against your will. She has a strong sense of justice.”

Following her display of defiance at the border, Maria was then arrested and sentenced to 11 years in jail for conspiracy to seize power, leadership of an extremist organization, and threatening the national security of Belarus. The case resembled Soviet-era prosecutions and was closed to the public. Maria has since lodged an appeal with the Supreme Court to dismiss the case.

The 39-year-old musician turned politician is currently being held alone in a detention cell and will be moved to a women’s colony in Homel, where she will be expected to work. She has access to television and limited offerings in the library, including the Russian-language version of Harvard Business Review. But she doesn’t have access to her flute, or even a CD player. The Bach lover also enjoys modern music.

She spends her 50 minutes outside running in the small prison yard, even though “she hates running,” Maria’s sister Tatsiana says. In an interview with the BBC, Maria credited her upbeat mood to the maniacal discipline she developed as a musician.

Tatsiana says that she and Maria come from an unusual family background by Belarusian standards. Snagging a husband wasn’t a priority. “We grew up in an environment of free discussion,” she says.

It was a democratic family, and their mother always wanted her daughters to be independent. Two years ago, their mother passed away, and their father still lives in Minsk. Since her arrest, he has seen Maria twice. Despite her incarceration, she remains positive and strong.

Maria has become a prodigious letter writer. She typically writes two letters a week to her sister, and answers thousands from around the world. “She knows that she isn’t forgotten,” Tatsiana says. (Write to Maria here.)

On October 19, Tatsiana accepted the John S. McCain Freedom Award from the International Republican Institute in Washington. Tatsiana regularly crisscrosses Europe to speak to parliamentarians and artists about her sister’s case. Claudia Roth, the vice chair of the German Bundestag, adopted Maria as a godchild, and Tatsiana is looking for an outspoken champion in Washington to do the same.

Perhaps the most heartbreaking part of Maria’s case is that she never intended to get caught up in the dragnet of Belarusian politics.

A native of Minsk and a flutist, Maria had been splitting her time between Germany and Belarus before the Covid-19 pandemic struck, traveling back and forth every two weeks.

In 2019, she landed a job as the art director of a cultural hub in Minsk called OK16, which was sponsored by Belgazprombank (prior to becoming a presidential candidate, Babaryka was previously the CEO of the bank).

In her role as art director, Maria would bring in musicians from Germany, Poland, and Lithuania. As the pandemic took hold, life in Germany shut down entirely, so she opted to stay in Minsk.

In May 2020, Belarusian presidential elections were called for August and Maria volunteered to join Babaryka’s team. After working with him on arts projects, it had become clear that they had a common vision and shared the same values. They decided that if something happened to Viktor or his son, Maria would be the face of the movement. Viktor was detained on June 18.

Tatsiana says Maria’s thirteen years in Germany influenced her heavily. She received her master’s degree in Stuttgart and cherished her freedom as an artist and as a human being. In an interview Maria gave before her arrest in 2020, she told me, “no artists can realize him or herself in a system of unfreedom or censorship.”

“She lived in [Germany,] a country with human dignity. What could be more important?” concludes Tatsiana.